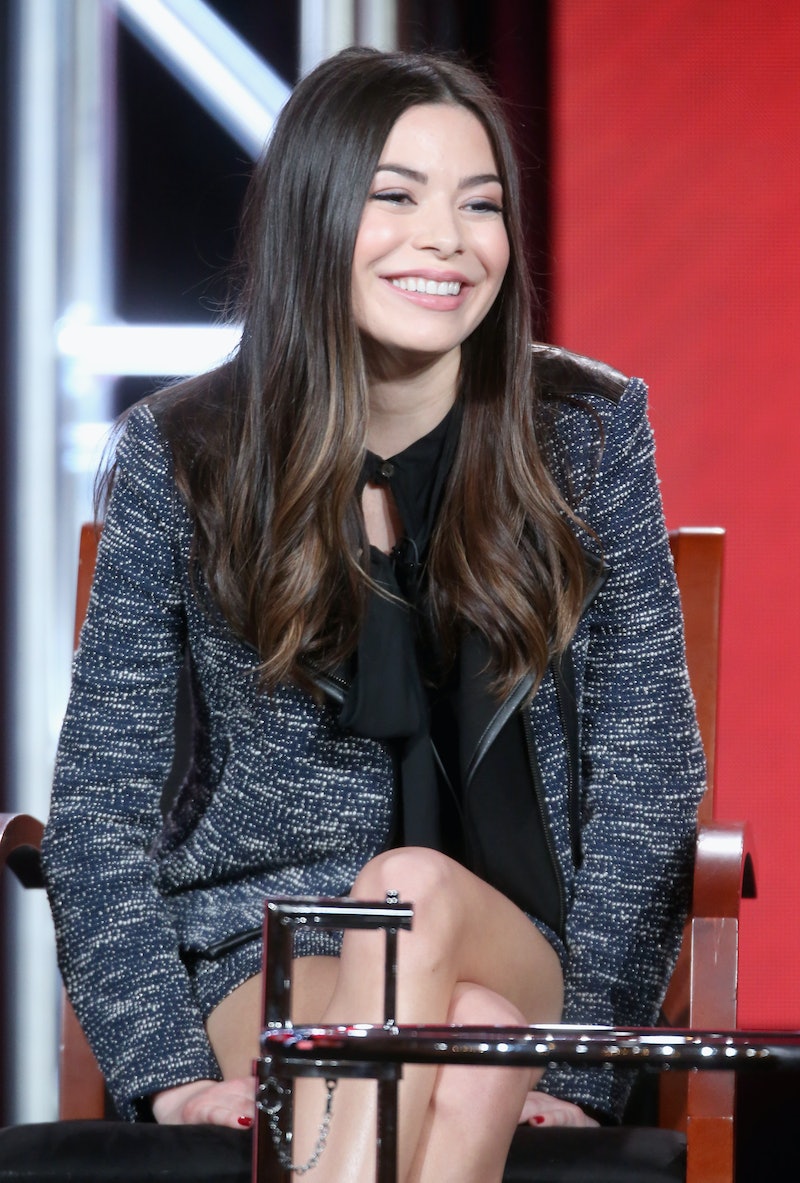 As a millennial, I've heard plenty of stereotypes thrown at my age group: "entitled," "tech-savvy," "self-obsessed," to name a few. While half of those adjectives make me want to roll my eyes, one phrase is fairly accurate — the Boomerang Generation. In other words, today's young people tend to leave home for college and then return right back where they started post-graduation, much like the trajectory of a boomerang. Before you scoff, this trend is so popular that it's become the premise of NBC's new comedy series Crowded, which premiered Sunday night. As star Miranda Cosgrove's character declares in the pilot, "The most logical course of action in this economy is to move back in with my parents. And because of the broad number of young people doing this, there's no longer the social stigma attached."

Although the lack of stigma is questionable, Cosgrove's certainly not wrong about how common the phenomenon is — and how helpful it can be. As she tells Bustle, "I think that it's really beneficial for people that are my age that they can still live back at home with their parents during college or maybe a little after college. Because it just really helps to get your footing, especially when you're having to get a job and save up money to pay for an apartment."

As someone who followed that exact path, I wholeheartedly agree. After getting my diploma, I lived in New Jersey with my parents for a year-and-a-half, which allowed me to save up, start paying off student loans, and feel more comfortable before venturing out and renting my first apartment in NYC. In fact, a majority of my friends did the exact same thing. Cosgrove, however, isn't quite in the post-grad phase yet (she currently attends the University of Southern California), and she admits that she's happy with her current situation. Says the star, "I love my parents. Even though, I have my own place, I really like staying with them."

Moving back home doesn't have to be a hindrance or a nightmare, but it does depend on your surroundings. On Crowded, Cosgrove plays Shea, the straight-laced sister to Mia Serafino's Stella, her more outgoing and artsy counterpart. Shea aspires to be an astrophysicist, while her sis pursues an acting career. Describing her role, Cosgrove says, "She wasn’t popular, she didn’t have a lot of friends, and she wasn’t really that close with her sister. She thought her sister was mean to her and too cool to hang out with her." As it turns out, this may have been a misconception. In reality, "her sister felt like she was smarter and didn’t want to hang out with her," the actor reveals.

Since both sisters are navigating common twenty-something struggles — job-hunting, family life, dating, and beyond — they're able to rebuild their relationship. Says Cosgrove, "They come together after college when they’re stuck in the same boat and not doing very well. Neither of them are able to get jobs, so it brings them together." Sounds like something anyone with sisters could relate to.

On the show, Shea and Stella's opposite personalities are reminiscent of another TV friendship that Cosgrove's been a part of. As you may recall, the actor starred on iCarly from 2007-2012, where she and her real-life BFF Jennette McCurdy portrayed distinctly different personas. When asked if the Crowded dynamic felt familiar, Cosgrove says,

For any diehard iCarly fans who are wondering, Cosgrove confirms that she and McCurdy are still just as close as they were during their time as co-stars. The two live near one another, and, Cosgrove shares, have sleepovers "all the time." Reflecting on their friendship, the 22-year-old says, "We did the show for so long and spent so much of our childhood together. I feel like as the seasons went on, a lot of that came out on iCarly, like a lot of our real friendship because we were so close and we are still."

Over the course of that Nickelodeon series, it's like fans grew up with Cosgrove, and thanks to Crowded's relatable premise, that's happening once again. The show reminds twenty-somethings that they're not alone in their post-grad struggles — and more importantly, that there's no shame in moving back home.