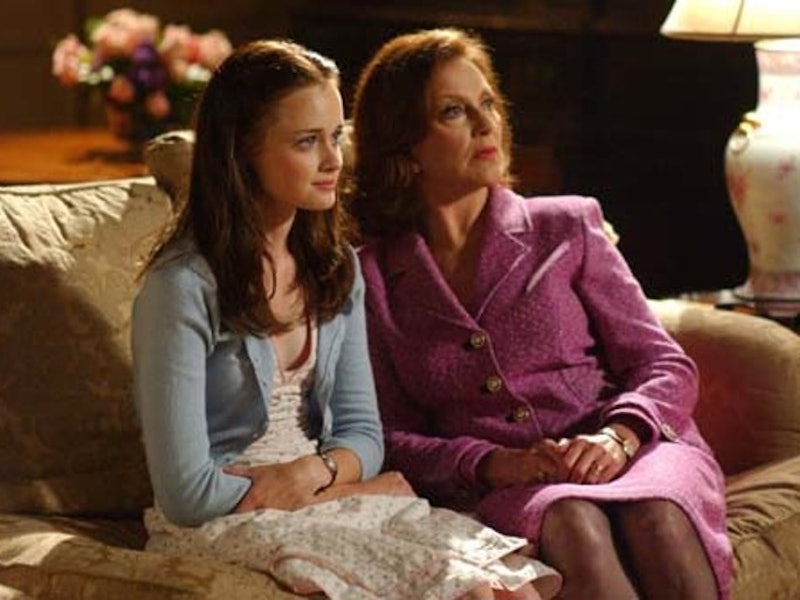 It is time to talk about the one piece of Gilmore Girls revival news no one is talking about: that Gilmore Girls might be going to a hippie commune. E! Online reported the info about the incoming hippies into an article on the show's casting way back in January, but due to the excitement over the revival itself, no one seemed to have noticed this detail — except for me. How could I not care? A commune conjures up the ideas of soul searching and peacefulness, and if one or more of Gilmore Girls' characters is going off the beaten track in search of enlightenment, that could be pretty significant information.

Figuring out which character is looking for sanctuary is no easy task, considering all three of the Gilmore women will be mourning Richard. And of course, it doesn't have to be a Gilmore who goes on this journey. There are several returning cast members who could be searching for themselves at some point during the revival — or the visit to the commune could be totally accidental. All I know for sure is that at least one episode of the show will reportedly contain hippies, and I need to know which character is heading so far off the beaten track. I've narrowed my list of potential commune visitors down to the following characters, all of whom would have a reason to leave the hustle and bustle of their normal lives behind for awhile.

I think everyone should be prepared to see a very different side of Emily in the revival. The matriarch of the Gilmore family has lost Richard, which is going to be like losing a piece of herself. It seems completely possible that Emily could leave her opulent life behind for a little while in hopes of figuring out who she is without her late husband. The prospect of seeing Emily go off the grid is both hilarious and potentially poignant, especially if Lorelai and Rory are the ones who bring her back to reality.

Visiting the commune could be an assignment for journalist Rory. An in-depth look at a modern day commune sounds like a feature piece to me, but what if it becomes personal for Rory? She might find the whole peace loving, nature vibe hard to buy into in the beginning, but if she's at a crossroads in her life, the time away could give her some much needed prospective. Rory is going to be in her early 30s in the revival and will have just lost her grandfather, so the potential for her to feel like she needs a new direction in life is very real.

Could Jess have found his zen? When I see Gilmore Girls and the word "commune" together, I immediately think of Jess' mom Liz. Now, Liz hasn't been confirmed for the revival, but that doesn't mean Jess couldn't head to a commune looking for his mom and then decide to stay for a bit. He could be doing research for a new book or simply continuing to find his inner calm. Either way, a commune could have a lot to offer the former bad boy if he allows himself to open up to a world beyond his beloved New York City.

Logan will try anything once, and I am sure that includes commune life. If Logan is having an early midlife crisis, I can definitely see him leaving everything behind to go off and be with nature — if only to drive his father nuts. Rory could be the one to swoop in and bring Logan back to reality, or maybe she gets swept away in the fantasy of living the simple, enlightened life too.

Hippies and rock and roll have always gone together. Lane is pretty level-headed, but she is also married to a man who is super mellow. The couple could be living the dream at the commune, playing their tunes and raising a couple of epically cool kids.

Yeah, this one needs no explanation. Finn would love living on a hippie commune, and his appearance there would probably happen by accident. I imagine him just showing up one day and forgetting to leave.

There has been little news about Christopher's return to the show so far. Maybe info is scarce because Christopher has started a new life on a commune? He's always been prone to restlessness, after all. His divorce from Lorelai could have led him to search for a real sense of a peace, and maybe he is in a position to share a bit of his new wisdom with Rory.

This would be typical Kirk — as long as there is a job to do, he would love living in commune. Honestly, he might have started the whole thing.

This whole hippie retreat development could end up being a big deal for one of your favorite Gilmore Girls characters, but you will just have to wait until the revival to find out which one.