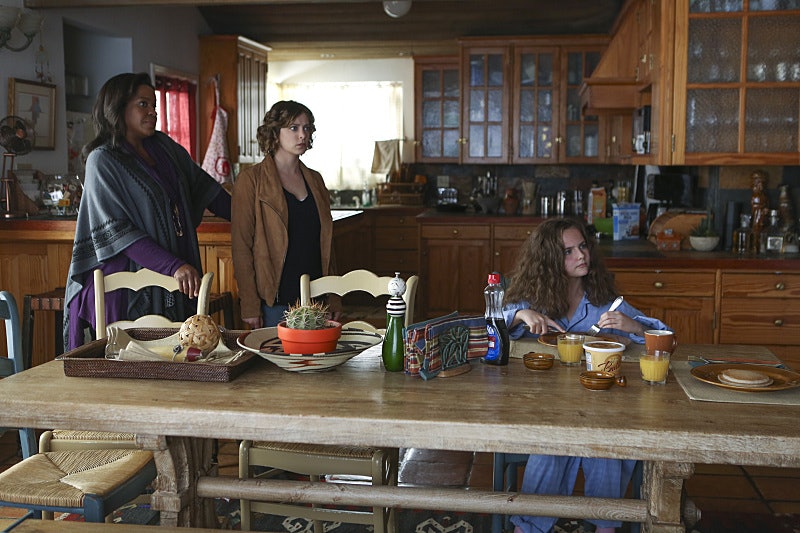 The last episode of The CW's Crazy Ex-Girlfriend had us wondering what Rebecca was doing on a plane and where she was going. We got the answer to that question early on during Monday night's new episode of the show. After feeling like it was impossible for her to love and be loved in return, Rebecca decided to head back to her old law firm in New York to resume the miserable existence she was in before moving to West Covina rekindle her relationship with Josh. But as the episode progressed, where Rebecca was going proved to not be nearly as important as why, ultimately teaching us all that everyone has love; it just comes in many forms.

As we saw in the last episode of Crazy Ex-Girlfriend, Rebecca was supposed to have an hours-long therapy session with her psychiatrist who she had been avoiding but just so happened to be seated right next to her on the plane. Instead, Rebecca took a couple of sleeping pills and downed a Bloody Mary, which put her into a deep sleep. However, Rebecca still got a therapy session of sorts as her psychiatrist took on the form of a "dream ghost" guiding her through her subconscious and her seemingly awful memories of love. The whole thing was also hilariously explained in a Dreamgirls-esque musical number with the help of guest stars Amber Riley and Ricki Lake.

Throughout the episode, the "dream ghost" showed Rebecca that during past moments where she thought she had lost love, it was actually showing itself in subtle, unexpected ways. Though Rebecca had always thought her cold and critical mom purposely showed up to take her home after she surprised her dad in Santa Fe, New Mexico, she actually showed her love by always protecting her from the fact that her dad actually didn't want to spend time with her because she got in the way of his big plans for his life. Revisiting Rebecca's brief stint in a musical adaptation of Moby Dick in college showed her that she let her affair with the director get in the way of her true passion for theater when she allowed his philandering ways to convince herself to quit.

And even back in West Covina, Rebecca has a lot of love as Paula, Josh, Darryl, and Greg were all very concerned about Rebecca's whereabouts and wellbeing. What's more, even though Greg played it cool and tried to seem like he didn't care that much about Rebecca being missing since she had caused so many problems in his life, he had also been making calls to hospitals and morgues just to ensure that she was OK. Rebecca may have been overlooking some true love there, too.

This episode of Crazy Ex-Girlfriend really hammered home the message that love comes in many different forms. But the fact that the show did so in such clever ways that really fit with the character, especially a bit of a twist about where the love was in the story about her Harvard days, helped breathe new life into the old adage. The focus on Rebecca and her past also allowed us to get a deeper, more raw insight into the character, which isn't always easy considering the fact that the whole show is about her constantly lying to others and herself.

So when Rebecca awoke from her nap on the plane, she immediately turned right around to head back to West Covina. Upon arriving back at her house, all of her friends gave a big sigh of relief when they saw her (I guess they must have been there for 10 hours or something like that). Most notably, Rebecca gave a huge embrace to Greg now that she realizes his true feelings for her. Perhaps this means these two will give romance another go?

Well, maybe, maybe not. The episode ended with Josh finding semi-creepy photos of himself with Rebecca and him asking if she's in love with him. It ended before we could get a response from Rebecca, so it'll be interesting to see if her supposedly new enlightened state will have any effect on her.