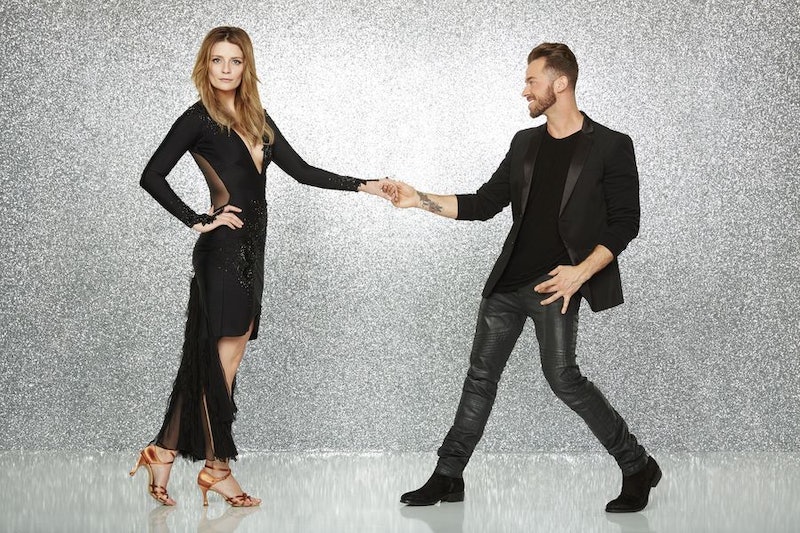 I don’t know about you guys, but I am seriously stoked for another season of Dancing With The Stars. I love diving deep into the glittery costumes, interesting song choices, and watching Bruno Tonioli excitedly screaming things at performers. I think it’s because I can’t dance, and I like to live vicariously. Dancing With The Stars pro dancer Artem Chigvintsev is just as excited as I am, and he talked to Bustle about life with his newest DWTS partner, actress Mischa Barton.

First things first — Mischa Barton got her start in movies like The Sixth Sense , but most people (especially of a millennial age) would recognize her from The O.C., also known as the best teen show of any time ever. Turns out that Mischa and Artem have an O.C. connection — Artem also appeared on the popular teen soap. “When I was on The O.C., I think Mischa had already left. I was in one episode — nothing really special, just me at the bar with Melinda [Clarke, who played Julie Cooper Nichol], I believe,” Artem says. “She dances a little bit! Even the producers of our show didn’t know I was on the show! It was a shock for everyone.”

That seems like some fateful casting, no? Any plans on dancing to the show’s theme song, “California” by Phantom Planet? “As far as right now, I haven’t thought about dancing to the theme song, but it all comes down to rights and whether or not it fits the genre of dance we’re doing. There will be conversations about it,” Artem hints.

Dancing With The Stars is notorious for its strenuous rehearsals, and this year is no different. When asked how his and Mischa’s preparations have been going, Artem was very positive. “It’s been good so far,” he reveals. “We’ve been working really hard to make the first performance very memorable. We’ve had about seven or eight rehearsals so far. With the first rehearsal, you’re just trying to get to know each other and find out strengths and weaknesses.”

Speaking of strengths on the dance floor, what are his partner's? “Mischa’s biggest strength is finding and using a character. That’s definitely her strongest point,” Artem says. “This type of dancing we’re doing right now is different from every other style of dance because it requires a partner. Everything is new with her dancing. She’s an unmolded piece of clay!”

Artem keeps mum on who his and Mischa’s biggest competition is on the show so far. "Honestly, I haven’t seen anyone, but I heard that everyone is really good in rehearsals,” he says. But, when asked whom he would like to be paired up with for the infamous partner switch week, Artem has an idea or two. “Mark’s partner, [UFC fighter Paige VanZant], seems fun. I would like to dance with her — dancing with a badass fighter would be pretty crazy!” Artem says.

Will Mischa and Artem take home the coveted Mirrorball trophy? We’ll have to wait a few weeks to see, but with Artem’s tutelage, I’m sure Mischa has an excellent shot at Dancing With The Stars glory.