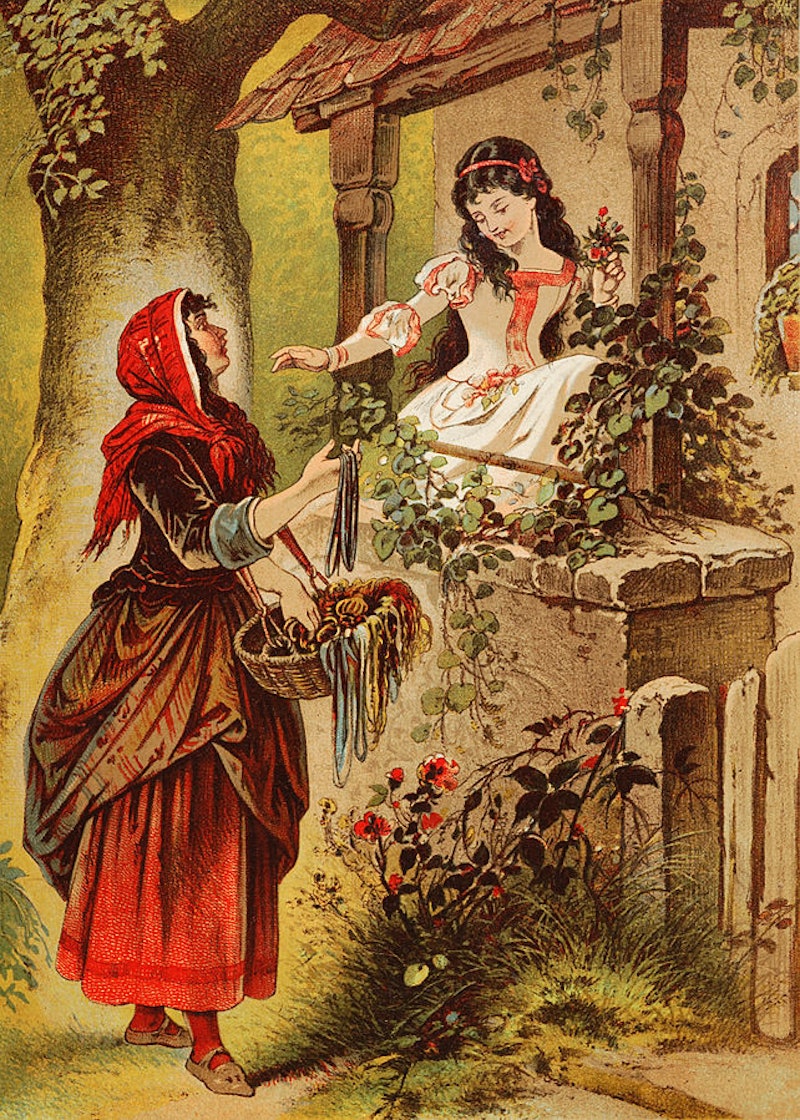 In order to understand where the sexist tropes we see in the media come from, it helps to take a look at one of the most influential roots of Western stories: Fairy tales. Many of the sexist tropes found in the fairy tales of ye olden times have made their way into modern children's books, family movies, and even romantic comedies. These conventions can be easy to take for granted because they're all around us, but when you look at their origins, they're actually quite disturbing.

Fairy tails are really complicated and fascinating from a feminist perspective. A lot of them have female protagonists and explore issues specifically faced by women during the times when they were written, like marriage and familial relationships. As Anne Thériault points out in The Toast, it's likely that a lot of fairy tale publishers got their inspiration from folklore related by women. However, the fact that something was created by a woman doesn't absolve it from being sexist, especially when it was written during a time when women had few rights. And it's easy for tales to get twisted over time and glorify things that were initially presented in a negative light.

Here are a few of the sexist tropes seen in the fairy tales of old that still affect the stories we hear today.

What do Cinderella, Belle, Ariel, and Jasmine all have in common? They don't have mothers. And as Sarah Boxer points out in The Atlantic, many non-fairy-tale-based movies also employ the trope of the "gone or useless" mother. She cites Mrs. Doubtfire and The Man Without a Face; additionally, I also noticed the trope of the dead mother driving the plot in the recent horror film Crimson Peak. Boxer theorizes that the death of fictional mothers contains elements of misogyny, serving to split women into two (the "good" dead mother and the "evil" stepmother) in fairy tales and to glorify fathers in modern-day stories. Whatever the reason, this plot line gives off the impression that a mother's role in a child's life is unworthy of mention.

The main characters of fairy tales are often not only without mothers, but also without supportive women to turn to, period. Instead, female fairy tale characters are in competition, whether for things like the prince in "Cinderella" or the title of "fairest of them all" in "Snow White." This trope implies that women are a threat to one another and men are the only people who can offer anything positive to a woman's life. As author Chimamanda Ngozi Adichie says in the TED Talk "We Should All Be Feminists," "We raise girls to see each other as competitors — not for jobs or for accomplishments, which I think can be a good thing, but for the attention of men." And fairy tales don't usually help that.

The original versions of "Snow White" and "Sleeping Beauty" contain overt sexual violence. In Giambattista Basile's "Sun, Moon, and Talia," the predecessor of "Sleeping Beauty," the princess actually wakes up when she gives birth to the children of the prince, who has raped her in her sleep. And in the original "Snow White," the prince pretty kidnaps Snow White while she's unconscious. These plot lines depict women as objects that princess are entitled to do what they want with, and they don't even depict this as negative.

4. The Knight In Shining Armor

One problematic aspect of fairy tales that's frequently discussed is their focus on a woman's longing to be rescued from her lonely life by a man. Fairy tales like "Cinderella" and "Rapunzel" end when a man saves a woman from her uneventful single life, which can encourage the girls hearing these stories to believe that the way to find happiness is to find and marry a high-status, conventionally attractive, masculine man like the princes they've read about in stories or seen in movies.

As seen in fairy tales like "Hansel and Gretel," "Snow White," and "Sleeping Beauty," the trope of the evil witch smacks of both sexism and ageism. The stigmatization of witches historically has roots in misogyny; many historians have argued that the witch hunts of the 16th and 17th centuries targeted women in particular for being independent and forming spiritualities free from patriarchal religions. In addition, the witch is usually an old woman, suggesting that all a woman can be as she ages is a jealous adversary who lives all alone in the woods. Like the evil stepmom and stepsisters, the evil witch trope pits women against one another and leaves them to rely on men for all positive relationships, neglecting all the ways women — especially older women — can help one another.

More like this
20 Christmas Movie Quotes That'll Get You In The Holiday Spirit
By Alexis Morillo
The 'Lady Chatterley's Lover' Book Leaves Us With A Troubling Question
By Catharina Cheung
Here’s Your Daily Horoscope for December 7, 2022
By Mecca Woods
69 Great Gifts For Guys No Matter What Their Hobbies Are
By Teresa Newsome, Mia Mercado and Brittany Leitner
Get Even More From Bustle — Sign Up For The Newsletter