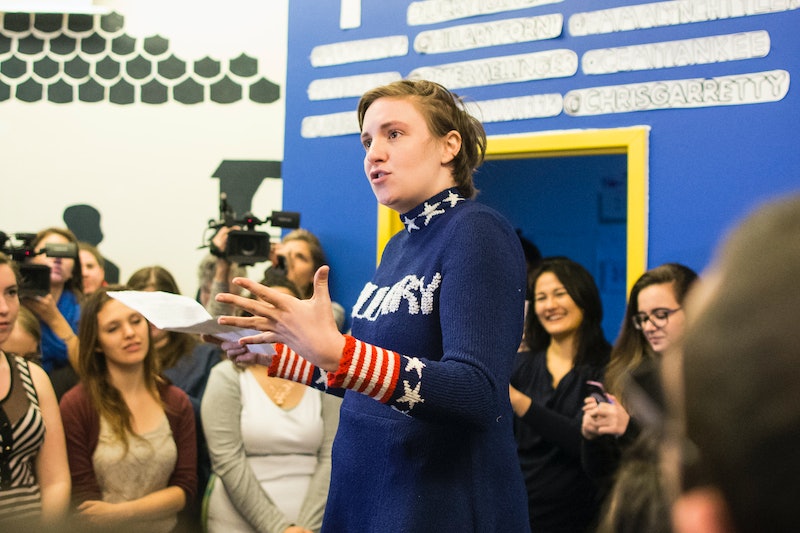 Lena Dunham is one of Hillary Clinton's most dedicated celebrity endorsements, constantly campaigning and spreading the word about the Clinton campaign. Because the Girls creator and actor goes all in for her passions, she's even donned some pretty impressive custom clothing repping Clinton 2016 (always in red, white, and blue, of course). Dunham's latest Hillary-themed jacket may be her best campaign look yet, and there are plenty of other cool handmade Clinton 2016 items to inspire a full DIY look.

While speaking to women in West Hollywood about her presidential candidate of choice, Dunham sported a denim jacket with a giant "Hillary" patch across the back and smaller patriotic patches that said "vote" and "win." As if that weren't enough, she wore the jacket with a high-school style t-shirt showing off a big "H" and varsity socks also embroidered with "Hillary." In an Instagram post of herself dancing in the ensemble, Dunham called herself a "late in life cheerleader," and she's proven to be a very spunky cheerleader for Team Clinton.

If you want to follow in Dunham's footsteps and show off some bespoke garb in honor of your favorite presidential candidate, there are lots of options — on top of all the inspirational Clinton-themed outfits Dunham has graced her Instagram followers with, other Clinton supporters have dreamed up creations as well.

Check out six other cool custom-made Clinton 2016 items you can make right at home to fully geek out over the election.

A few months ago, Dunham posted this photo of her donning a magnificent "Vote 4 Hillary" blazer and matching pants apparently made out of buttons. Though pretty time-consuming, a similar DIY jacket wouldn't be too difficult to create, and would definitely up anyone's campaign attire game.

A more temporary look is this Clinton-Beyonce nail art masterpiece by Nails by Mei. A nail polish portrait of the presidential candidate takes some serious skill, so you could improvise with something else Hillary-themed, like writing out "Hillary 2016," if that's too much for you.

Katy Perry, who has also campaigned alongside Clinton in recent months, rocked this very simple t-shirt that says, "Hillary Clinton is a badass." All this requires is a white t-shirt and black sharpie — talk about an easy project! You could really write anything you wanted about Clinton on a t-shirt and call it a day.

Perry's outfits while repping Clinton have also reached Dunham's level of commitment, including this sparkly dress and American flag cape. Clinton's "H" logo could be made out of paper or anything that can be cut and stuck to an outfit. For the cape, an average American flag can be attached to a formal gown like Perry's, or a more casual dress.

If a suit is more your style, this stand-out ensemble covered in Clinton's portrait only requires a white suit, a stencil of Clinton's face, and some paint. No one will wonder which presidential hopeful you favor if your outfit is covered in her picture.

These Clinton heart signs scream "I love Hillary!" Whether you need a sign to carry at a campaign even or want some Clinton propaganda on your wall, a cute custom sign can be made completely out of colored paper.

Handmade Clinton 2016 items are the perfect way to channel your artistic creativity and love for the candidate into a fun project that will help promote your pick for the election.

More like this
Are John Legend & Kanye West Still Friends? The Singer’s Latest Update Is Candid
By Brad Witter
A Political Thriller Inspired By The Munich Massacre Is Coming Soon
By Darshita Goyal
Why Eurovision 2023's Host City Won’t Be Revealed For A While Yet
By Sam Ramsden and Rachel Mantock
A Compendium Of Halsey’s Most Show-Stopping Red Carpet Looks
By Allie Fasanella
Get Even More From Bustle — Sign Up For The Newsletter