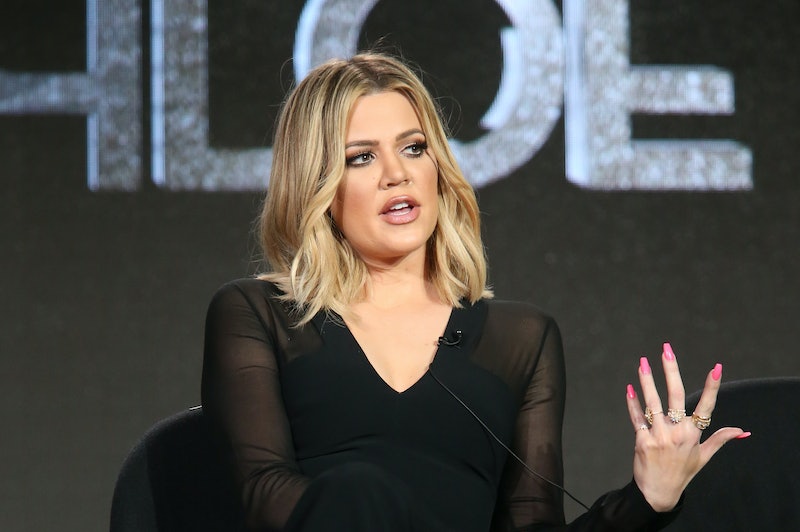 If you've been on the Internet at all since December, then you've assuredly seen the nationwide obsession with the hit Netflix documentary series 'Making a Murderer'. The 10-part documentary chronicles a true crime story around Steven Avery, a man from Wisconsin who was convicted of a murder that he may or may not have committed. Although the documentary was released nearly four months ago, Khloé Kardashian just discovered Making a Murderer and began her binge-watching pretty late in the game.

It's surprising that Khloé waited so long to join the conspiracy theorists and true-crime-binge-watchers in their love of MaM. More than 19 million people watched MaM in the first 35 days after its release, according to AdWeek, and Khloé's recent discovery proves that the show is still popular today. The filmmakers' investigation began in 2005 when they came across a New York Times article about Avery's case. Since then, they have spent the last 10 years sharing their thoughts on the Avery case and continuing to question the details of his trial. For Khloé, it only took a couple of hours and three episodes to embark on an epic Twitter rant in which she shared her thoughts and concerns about MaM.

Even though she was four months late to the crime documentary phenomenon, Khloé's reaction is similar to everybody else's — it's clear she wants to find answers in the Avery case just. Like. We. Do. Khloé's binge-session started just after midnight and she was hooked from the first episode.

During her MaM live-tweeting, fans tweeted Khloé clues about developments throughout the season, which proved that Khloé might actually be one of the last humans to watch the documentary series. In any case, Khloé was hooked and continued on her hours-long journey into the complex Manitowoc County case.

Episode three was apparently the one that really put Khloé over the edge with anger. She began using the popular hashtag #MakingAMurderer to join in the conversation with other MaM lovers and to ask the hard-hitting questions (like how on earth this actually happened in real life!?).

Khloé's Twitter rant and late arrival to the MaM obsession proves that interest in the hit documentary series is still high months after its release. More than just a series of original tweets, though, proved how popular MaM remains today; Khloé retweeted three tweets from Avery's new lawyer, Kathleen Zellner, before she finished her binge-watching.

The obsession went past just retweets: Khloé's love of MaM went so far, she actually ended up on Zellner's official webpage. (Don't act like you haven't been there, too.)

And in the most real tweet from Khloé's late discovery of the docuseries, she revealed her deepest, darkest thoughts about the case. Specifically, Khloé basically summed up all of our feelings when scourging through web pages of fan theories and Googling "How To Write Steven Avery A Letter In Jail." Whoops.

Forget Keeping Up With The Kardashians; let's try to keep up with the Avery case and Khloé's continued exposure to possibly one of the most instantaneously popular Netflix documentary series.

More like this
9 Honestly Unbelievable Revelations From The WAGatha Christie Trial
By Frances Stewart
UK Viewers Will Have To Wait To See Jessica Biel’s Killer Housewife Series
By Rachel Mantock
Michael Peterson & Sophie Brunet’s Relationship Timeline
By Morgan Leigh Davies
Don Crowder Successfully Defended Candy Montgomery, But His Story Ended In Tragedy
By Gretchen Smail
Get Even More From Bustle — Sign Up For The Newsletter