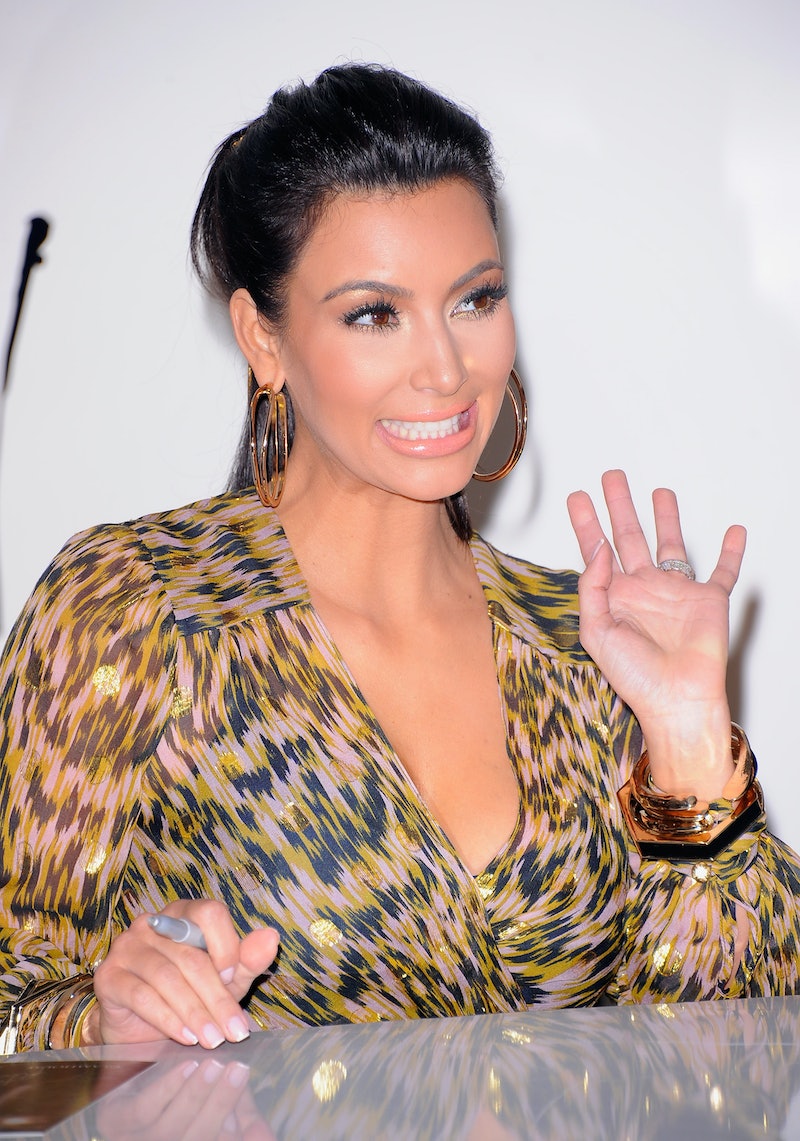 Kim Kardashian is a chameleon. She is a huge part of our culture now, and being that her family has been on one of the most popular reality shows since 2007, we have seen many changes that the Kardashian-Jenners have gone through. There have been breakups, makeups, photo shoots, exotic vacations, and lots of wardrobe upgrades. Since Kim has been the most popular sister for so long, we have seen how she's grown and changed in the spotlight over the years. I thought it'd be interesting to revisit some Kim Kardashian quotes that sound nothing like the Kim K we know today, and that prove no one is immune to foot-in-mouth at times.

When it comes to the Kardashians, the moment they say something, it could be printed on a magazine cover or turned into a meme, immediately. No one in the family is safe, so they're likely pretty careful with what they say. But then, we have moments when we remember that the Kardashian family, however astronomically famous they may be, are still just human and say weird and silly things about their lives and themselves. Kim might be all fancy in public nowadays, but she's definitely said some quotes in the past that don't sound at all like her and probably don't fit her personal brand.

Back in 2010, Kim posed nude for the cover of W Magazine , and she told Us Weekly afterward that she probably wouldn't do it again. Fast forward to the reality star breaking the Internet with her Paper magazine cover and tweeting her naked selfie, and it seems like her stance on that has changed. Hey, she still looks good!

Who would ever think that Kim Kardashian was the slightest bit interested in video games? Back in 2012 she tweeted her excitement for Call of Duty: Black Ops II, but no word on whether she actually played it or not.

3. "I cannot wait to get my nails off. I feel like I just can't function in the real world with long nails."

I don't know. Kim always struck me as someone who loved long nails, but I guess not, as she shared in the season 10 premiere of Keeping Up With the Kardashians . Khloé Kardashian, on the other hand, said in the same episode that she gets energy from long nails. Hmm...

4. “Leggings killed velour sweat suits! I used to only wear them until leggings came along.”

Kim tweeted her distaste for her velour sweat suits back in 2010. Hearing her even talk about such comfortable clothes sounds weird.

5. "In recent years, I'm like too cool for duck face, so that doesn't happen."

During an interview with NPR last summer, Kim confessed that she was over the duck face. But, Kim, you still love duck face!

In 2011, around the time Kim released her single single "Jam," she told Harper's Bazaar that she was very confident in her singing ability. The tides have definitely changed. During an appearance on Watch What Happens Live in 2014, Kim told Andy Cohen, “I don’t like it when people kind of dabble into things they shouldn’t. And that I don’t think I should have. Like, what gave me the right to think I could be a singer? Like, I don’t have a good voice.” Oop!

7. "Anyone know exactly where rack city is?"

It is kind of hilarious that Kim tweeted this in 2012, considering her little sister is now dating "Rack City" rapper Tyga.

Kim told New York Mag in 2012 that being on a magazine cover was never her dream, but it sure seems like that was something she had been working toward for many years. After watching KUWTK, we all know being on the cover of Vogue has been a goal of hers forever.

9. "Is that not ridiculous that people thought that Justin Bieber and I were on a… romantic vacation [together], in the Bahamas, and I just happened to wear a gown as my swimsuit and red lips and he's dressed in a suit in the ocean? Seriously — who would walk to the beach like that?"

Kim defended her Elle photo shoot with Justin Bieber back in 2010 in an interview with Radio 1, but truth be told, wearing a gown to the beach with red lips is something she would totally do.

In 2009, Kim was promoting her new line of workout DVDs, which had a conflicting message of embracing your body but striving to get skinny as fast as possible. She might have thought that then, but Kim really hasn't hidden the fact that she misses the days she was thinner — she especially seemed to miss it while she was pregnant.

Kim tweeted back in 2010 that she wanted to buy everything in the SkyMall, but I don't think her high-fashion tastes nowadays would allow for that.

Kim's Twitter in 2010 was a gem, and she shared her love for Germany in a way that might be viewed as politically incorrect... Either way, she sounds so silly and unlike herself.

Kim has said things that are not totally characteristic to the Kim Kardashian we think we know now, but that just proves that she's constantly changing just like everyone else.