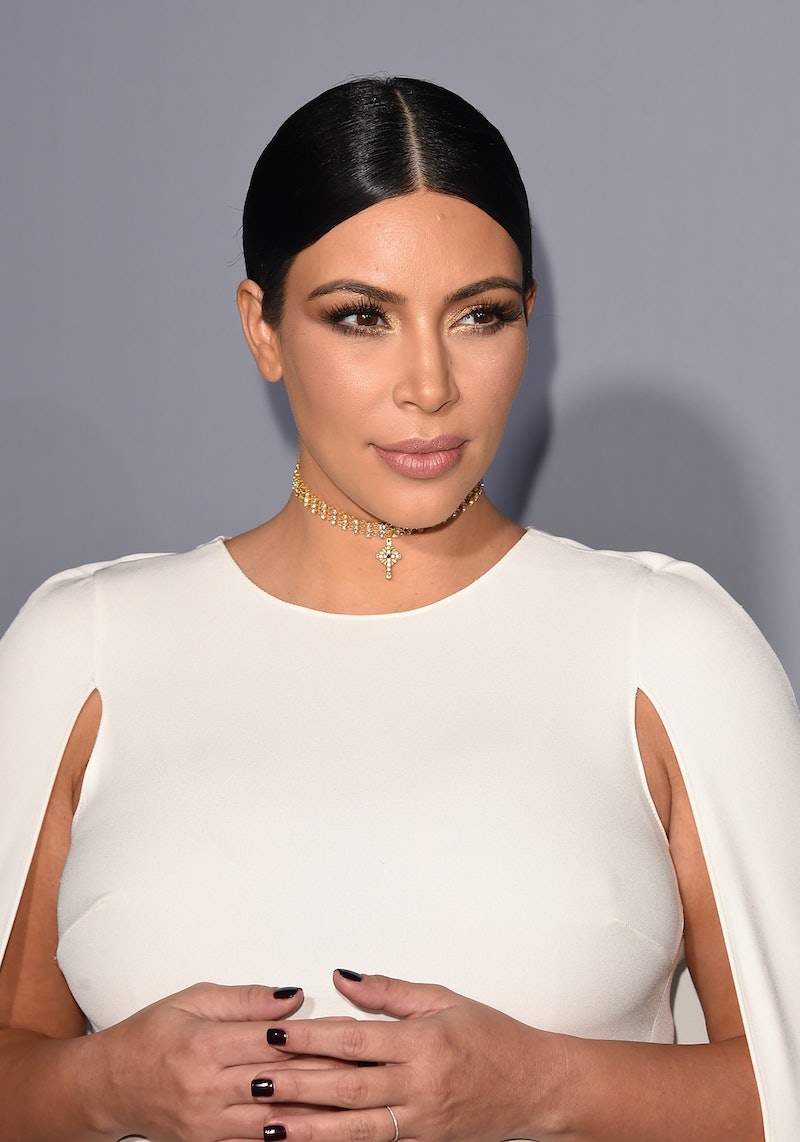 If you thought the world of the Kardashians couldn't get any stranger, sorry, it just did. Not only did Kim Kardashian meet her doppelgänger Kamilla Osman, but they also filmed Keeping Up With the Kardashians together. Wait, what? Why would Osman be filming alongside Kardashian for her E! reality series? Actually, it might make a lot more sense than you think.

First, if you weren't aware, Osman is a very convincing look-alike of Kardashian's. So much so, when you look at the photo below of the two side by side, it's kind of hard to tell them apart. (FYI, Kardashian is on the left.) Anyways, Osman captioned the kissy face photo, "Look who I ran into the other day - @kimkardashian, we can't wait for you guys to see our episode of #KUWK and see what we were up to xo Kim is such a sweet person and so so gorgeous, my god!"

Kardashian also shared a few details about their meeting on her official website and wrote, "Look who I ran into— Kamilla Osman! I've been seeing people say we look so much alike! She's so sweet and it was so fun to run into her. So funny! I can't wait for you to see Keeping Up with the Kardashians soon and see what we were up to the other day!!!!"

After I stopped staring at the photo and trying to decipher who's who, I began coming up with an explanation for Osman filming for KUWTK. It's not rare for the reality series to go above and beyond for ratings (remember Kimye's wedding?), but to bring on Kardashian's doppelgänger?

It certainly doesn't seem to make sense at first, but after some analyzing, I came up with a few logical reasons.

It Was Spur Of The Moment

As Kardashian noted on her website, she supposedly "ran into" Osman. Either, she is trying to distract people from the truth, or it really was fate. Maybe after randomly running into one another, Kardashian decided to make Osman part of KUWTK.

Let's face it, the Kardashians know the paparazzi all too well. So, maybe Kardashian had Osman help her out with the photogs by having her walk around as a stand-in. The reality star could've had a very important appointment or some secret meeting, so Osman makes the perfect distraction. Or, you know, maybe Kardashian just needed a break from being photographed all the time.

It's clear that Osman admires Kardashian, so maybe she was making her dream come true by having her come on the show.

Kim & Her Bestie Jonathan Got Into A Fight

Not only are there photos out there of Kardashian and Osman, but the Kimmy look-alike has also been photographed with Jonathan Cheban, Kardashian's BFF. Per a source who chatted with DailyMail.com, Cheban needed a break from Kardashian after they had a "fight" and decided to hang with Osman. Osman also shared a couple photos of herself with Cheban on her Instagram and even captioned one, "Stay gracious best revenge is your paper." Hmm... well, that's cryptic, but could also prove Cheban was getting revenge on Kardashian after an alleged fight.

Kim Wanted To Play A Prank On Her Family

The Kardashians love to mess with one another, so what makes for a better prank than having someone who looks exactly like you go chill with your fam and confuse them or creep them out?

We're yet to find out the real reason behind Osman's KUWTK episode, but let's hope it's as interesting as it sounds, because I better not be having this reaction after seeing it: