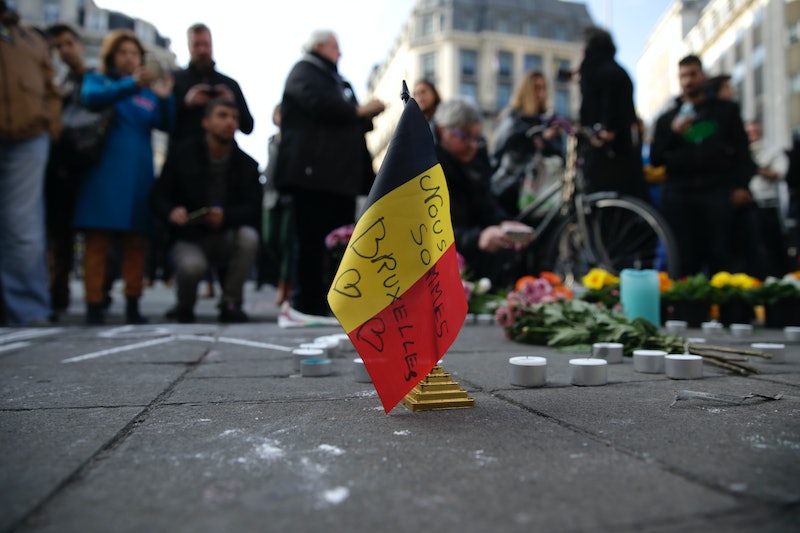 On Tuesday, March 22, Brussels, Belgium, was struck by the highest-profile, deadliest terrorist attack against citizens of a European nation since the harrowing Paris attacks back in November. Reports suggest that at least two dozen people were slain, and more than 100 more injured, by bombings at the airport in local municipality Zaventem and in the city's metro system. And if history is any judge, this awful crime could be leveraged in some awfully dangerous ways — the Brussels attacks will hurt American politics, because too many politicians are too wiling to take the bait from terrorist organizations.

While the attacks happened mere hours ago, and a fuller picture of the story will come out in due time, the Islamic militant group ISIS has claimed responsibility, just as it did following the Paris attacks. And even had it not, it would've been a conclusion that the media and politicians around the world would've been quick to draw — ISIS, simply put, has somewhat built its grisly reputation on these sorts of coordinated, destabilizing acts of violence.

That said, it's also built its reputation on a disturbingly canny sense of how to inflame, agitate, and sway international politics into a fever pitch. And considering the already disturbing conversations some American presidential candidates have been having about terrorism, and more specifically about how to react to it? Let's just say that there's going to be an impact.

For a prime example — the prime example, really — you need look no further than Republican frontrunner Donald Trump, who's already carved out his position as the most vociferous and dangerous voice in American politics regarding terrorism and Islam. He did this largely by way of the Paris and San Bernardino attacks, cagily (if demagogically) leveraging the shocking and appalling scenes to justify some of the worst and most draconian statements and policies in recent memory.

For starters, you could take a look at Trump's odious, frequent mentions of a widely debunked story about a general shooting Muslims with bullets dipped in pig blood (he's telling it in a complimentary way, to be clear). The story is false, and by this time after so much coverage, Trump or his campaign must have surely figured that out. But it hasn't stopped him from telling this grisly, downright racist anecdote on the stump.

Or, perhaps more significantly, just look at the chief anti-terrorism policy proposal to spin out of Trump's campaign: he's repeatedly called for a ban (a temporary ban, he's been careful to add) on all Muslims entering the United States, "until our country's representatives can figure out what is going on." That explanation underscores just how limp and useless it is to call it "temporary" — until Donald Trump finds out what, exactly?

That could mean weeks, it could mean months, or it could mean years. And if you give somebody of Trump's sensibilities an open-ended timeline, it's not unreasonable to think it could last quite a while. Needless to say, Trump is also strongly opposed to allowing Syrian refugees into the country, which in addition to being a goal of ISIS (they don't want the innocent people they've displaced becoming Americans) will only serve to reinforce the group's core message — that if you're Muslim, powerful western nations can't or won't differentiate between you and a murderous militant.

It's a nightmarish situation all around. The terrorist attacks? Nightmare. The motivations of those attacks? The same. The response by a chief contender for the American presidency, playing right into the hands and specific goals of the attackers? It is, suffice to say, a grim state of affairs. And lest you think it doesn't have a meaningful impact, bear this in mind: since Trump proposed his Muslim ban, polls have shown that a staggering number of Republican voters agree.

Back in December, an ABC News/Washington Post survey found that 60 percent of GOP voters backed Trump's proposal — which again, would perhaps be the ultimate victory ISIS could score, allowing the U.S. to be easily framed around the world as an openly anti-Muslim oppressor. Exit polls following some of Trump's wins in the primaries have looked even more dire, with more than 70 percent supporting it in some places.

That's the big threat with this kind of politically opportunistic demagoguery, and it always is — the more these sorts of extreme, self-harming and xenophobic solutions are given voice, represented in otherwise respectable media outlets and trumpeted at nationally televised debate and rallies alike, the more likely the sentiment starts to take hold. Which is precisely why terrorist attacks like what happened in Brussels pose such a dire threat to America as well — because they're legitimately heinous and terrifying, and that allows would-be leaders to win power by offering facile, ultimately self-destructive answers.

Simply put, if you're following the presidential race at all closely, you're going to hear a lot more about this — Trump's chiefest rival, Texas senator Ted Cruz, has already been pressing rightward with his anti-terrorism rhetoric in the aftermath of the Brussels attacks, and that's one patch of turf that Trump isn't going to cede. Hopefully the country (or at least a sizable enough majority of it) can collectively rise up and reject this approach, but it's by no means assured.