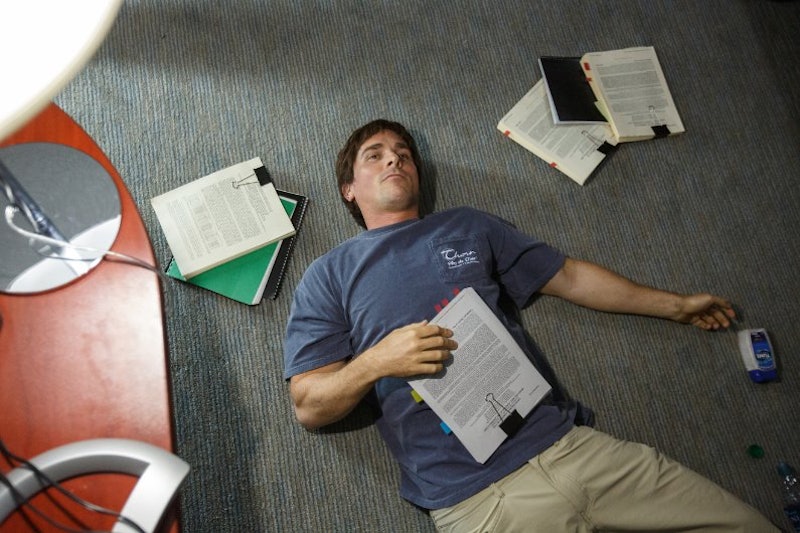 One of the most talked-about movies of 2015 was, without a doubt, The Big Short. The Adam McKay-helmed dramedy tells the real story of the handful of financial analysts who saw the 2008 housing crisis and financial meltdown coming before anyone else, and profited greatly from it. The film made back almost five times its budget at the box office, won the Oscar for Best Adapted Screenplay, and was even endorsed by presidential candidate Bernie Sanders. But now that we're well into 2016... well, nothing's changed. People are still talking about this movie. Obviously the film's message has resonated with fans, but as these quotes the real Big Short characters show, the movie's inspirations have also been affected.

Though only one individual was represented with his actual name in the film (Dr. Michael Burry, portrayed by Christian Bale), a number of others saw characters based on their likenesses. This includes Steve Carell as Mark Baum (based on Steve Eisman), Ryan Gosling as Jared Vennett (based on Greg Lippmann), and Brad Pitt as Ben Rickert (based on Ben Hockett). Yet even though the public knows who they are, few of them have actually gone on record with their impressions of the film. However, what has been said will fascinate fans of the film.

"Christian is an incredibly professional actor. I certainly can't be unhappy with his portrayal or effort he put in," Burry told CNBC about Bale's performance. The genius investor has said very little about the film itself, but it's clear that he enjoyed the film. He attended the premiere, and worked closely with Bale to help get his character down — literally giving the actor the clothes off his back.

Eisman hasn't gone on record about the film, but he did work with Carell on set. The actor attributes the following quote to Eisman, who, while Carell was brooding in a particular scene during filming, reportedly said to him, "At this point, I was joyful because we had these guys on the ropes, and this was just going to be fun for me." Through this alleged quote, it seems that Eisman was intent on making sure Carell captured how he was feeling during the events depicted in the film. Since Carell listened, I have to think that his real-life inspiration was pleased with the end result.

Lippmann has steered clear of the press since the film was released, but he did have dinner with Gosling before the film to help shape his character. Gosling told Vulture that in their meeting, "[Lippmann] was very helpful, in a way, in sort of helping me to understand as much as is possible the sort of financial lay of the land at the time. He understood the character was loosely based on him, and his purpose in the film was to educate the audience on the overall story. And he was helpful in sort of adding flavor to the character so that he wasn’t just a narrator."

Hockett hasn't spoken out about the film, and it's doubtful that he's going to. He reportedly lives a relatively isolated existence, and Pitt has said that Hockett's house is inaccessible by car. So it's entirely possible that this guy hasn't even ever watched the movie, let alone tweeted his opinion on it.

Even though the real life subjects of The Big Short have kept pretty quiet about the film, the fact that many of them were willing to work with the actors shows that did care how they came across on-screen. And given that what has been said has been positive, it's reassuring to know that those who've spoken out seem to like what they saw.