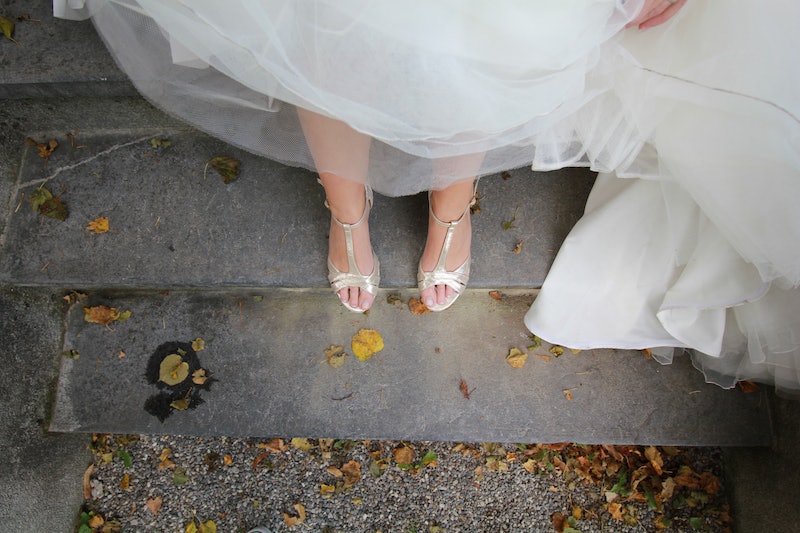 There are, of course, a lot of things that are generally not advisable to say to someone who just got engaged: Think such gems as, “It’s about time!” (the timeline is immaterial), “Isn’t that kind of fast?” (see previous point, re: the timeline is immaterial), and “Oooo, Your First Name and His Last Name sound so great together!” (who said anything about name changing?). But the one thing that my partner and I started hearing pretty much as soon as we made the news public — which was, oh, maybe two days after we actually did the whole getting-officially-engaged thing — heard repeatedly, and continued to hear for months after the fact was, “Do you have a date yet?”

This bothered me. A lot.

At the time, I kind of brushed it off with a laugh and a “Nah, we haven’t even started planning yet” — which, to be fair, was accurate; we didn’t start planning until January, about two months after we got engaged. What I really wanted to say, though, was “Of course not! We got engaged two days ago, for Pete's sake!” Furthermore, as November and December rolled by, the question continued to pop up — and every time it did, I found myself having to justify why we weren’t starting to plan yet to whoever was doing the asking. Again, we had our reasons; the final few months of 2015 saw a lot of Big Life Changes we had to deal with first, including my partner starting a new job and the two of us up and moving to a whole new city for it. But I didn't like feeling like I had to offer a justification for the timeline on which we were planning our wedding — nor do I think anyone should ever have to justify anything else pertaining to their nuptials.

I appreciated the well-wishing. I really did, and I still do. But what it all comes down to is this: The only people whose business anything about a wedding is, including the date, are the people who are actually getting married. If they want to share it, they’ll probably offer the information freely and unprompted. But ultimately, the “Do you have a date yet?” question— and all its variants, including “When’s the date?”, “So when’s the wedding?”, etc. — is the one thing not to ask someone who just got engaged.

Here are a few reasons why.

1. The Answer Is Probably “We Don’t Know Yet”

Or at least, it probably is if you ask immediately after the engagement occurs. Even if the people in question aren’t doing the whole venue-ceremony-reception song and dance, there are still services that need to be reserved in order to cement a particular date (an officiant, an appointment at the courthouse, etc.) — and if the happy couple literally just decided to get married, they probably haven’t had a chance to book any of those services yet. In these circumstances, you already know the answer to the question.

2. The Couple May Not Want To Share That Information

And it’s totally fine if they don’t. Their marriage, their business.

3. It Assumes A Particular Type Of Wedding

Maybe the people in question aren’t setting a date. Maybe they are setting a date, but they’re keeping it to themselves. Maybe they will set a date eventually, but aren’t in a hurry about it. How you go about the whole setting-a-date-or-not-setting-a-date thing depends entirely on each relationship and on the type of wedding that suits its participants best. Shoehorning the whole thing into one particular type doesn’t do anyone any favors.

4. It Brings Up Awkward Invitation Questions

What do you say to someone who asks you when the wedding is, but who isn’t on the guest list? “Yes, it’s Jan. 14, but you’re not invited. Sorry!”? “Yes, it’s Jan. 14,” followed by an intensely uncomfortable silence while the asker waits for you to volunteer information about where their non-existent invitation is? I mean, yes, you can do either of these things... but I'm probably not alone in saying that I'd really rather not have to. It's just awkward for everyone.

And while we’re on the subject, let’s just take a moment to remember that no one is automatically entitled to a wedding invitation. Yes, you are allowed to feel however you feel about whether or not you've gotten one... but that's where it ends.

5. It Puts A Boatload Of Stress On The Wedded-To-Be

My partner and I have been lucky in that our wedding planning process has been relatively stress-free so far. In fact, it’s even been kind of — gasp! — fun. A lot of that is because we’re having a teeny tiny wedding, but a lot of it has also been because our families and close friends haven’t hounded us about any of the details. When we have them, and when it’s important for other people to know about them, we share them with the relevant folks; otherwise, though, we’ve been left to our own devices, which has been a very, very good thing. (Thanks, everyone!) If everyone we knew was breathing down our proverbial necks about the date, the venue, or any of the other details all the time, though, it would probably be a much less enjoyable experience.

But you guys: Weddings should be fun. Marriage should (mostly) be fun. Why make something that should be fun miserable by adding a whole bunch of unnecessary stress to it?

I get that the “Do you have a date yet?” question might, in many cases, be an attempt at being supportive by showing interest, or even be about simple small talk. But really, “Congratulations!” is enough. If the engaged person you’re speaking with wants to share more, they will (and probably of their own accord); but if they don’t, that’s fine, too. Weddings are fun, but even the most enthusiastic participants need a break from it all every now and again.