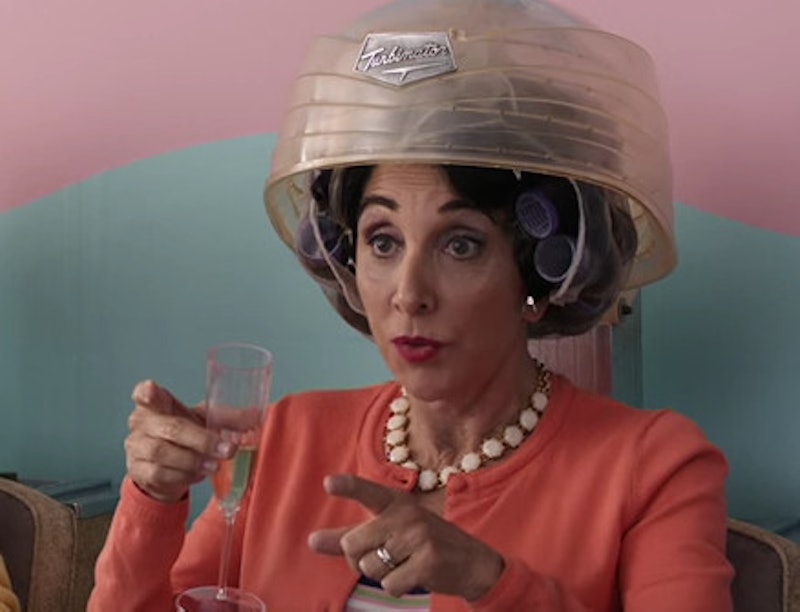 It's no surprise that the new film My Big Fat Greek Wedding 2 , this month's sequel to the 2002 sleeper hit, has brought back much of the characters and cast featured in the original. After all, what is a big, fat, Greek wedding movie without the huge, loud family at its center? The cast of characters was one of the original movie's best aspects, and the sequel features many of the same great characters. Maybe your favorites are the leads Toula (Nia Vardalos) and Ian (John Corbett) because of their adorable romance and triumphant courtship. Or maybe you like eccentric Nikki (Gia Carides) and her outrageous outfits, or Joey Fatone's Angelo, or silent but silly Yiayia (Bess Meisler). But for me, the best character, and probably the most underrated, has got to be Andrea Martin's Aunt Voula. This woman has a weirdness that I just adore, and between her odd oversharing and her enthusiastic optimism, she's totally the best part of the franchise.

Here's a little refresher course on Voula's awesomeness from the first movie. When she first meets Ian Miller, she asks to touch his hair, and rubs it through her fingers like she's picking out a piece of fruit — not exactly what you want your aunt doing when you bring your new boyfriend over to meet the family. And right after molesting Ian's hair, Voula invites Toula and Ian over for dinner, only to find, to her horror, that Ian is a vegetarian. After stunning the room into silence, Voula enthusiastically declares, "Oh that's OK, That's OK, I make lamb!" It's that combo of optimism and naiveté that just makes Voula so lovable, and while her eccentricities may be frustrating to her family at times, it's also a main reason they love her.

Except, perhaps, when she's oversharing. One of the first movie's best displays of Voula's candid nature has got to be when she tells Ian's parents, who at that point are drunk on ouzo, about her parasitic twin. Only a full reprint of her entire story will do it justice, and please read the following in her thick, Greek accent:

Now, you are family. Okay. All my life, I had a lump at the back of my neck, right here. Always, a lump. Then I started menopause and the lump got bigger from the "hormonees." It started to grow. So I go to the doctor, and he did the bio... the b... the... the bios... the... b... the "bobopsy." Inside the lump he found teeth and a spinal cord. Yes. Inside the lump was my twin.

Voula's oversharing tendencies come back into play in the sequel, and they make for some hilarious moments. But to dismiss her as comic relief would be a disservice to her, as she's a far more important character than that. Some of Aunt Voula's most underrated traits come out in My Big Fat Greek Wedding 2, such as her caring nature. In the sequel, Voula is one of the first people to notice that Ian and Toula haven't had much time to themselves after parenting for so many years and dealing with two full-time jobs, and she takes giving them rest into her own hands. When the other members of her giant family are busy, loud, and uncontrollable, it's Voula who steps in and takes charge. She notices things when others do not, and always has the confidence that she can fix any situation.

But probably the best thing about Aunt Voula in both films is her unconditional love and acceptance. (Minor spoilers ahead). As it turns out, Toula's cousin Angelo (played by Joey Fatone), is gay and has been hiding the fact from his family for years. When Angelo is finally encouraged by his cousin Nick (Louis Mandylor) to reveal his secret, his family could not be more accepting, and Voula is the most excited about her son's new revelation. When Angelo brings his partner Patrick to the big wedding that closes the movie, Voula embraces him like a son. "Are you Greek?" she asks. He's not, but, "It's OK, it's OK," Voula assures him, and dances with Patrick with the same intense love she has for her son.

In traditional families like the ones featured in the My Big Fat Greek Wedding movies, it's sometimes expected that the older generation of relatives might be a little less accepting of the wide variety of sexual orientations that make up our modern world. But Voula's total love and acceptance is something that every person should emulate. For that, plus her hilarious oversharing, and her eternal optimism, she makes for one of the series' best characters — if also its most criminally underrated one.