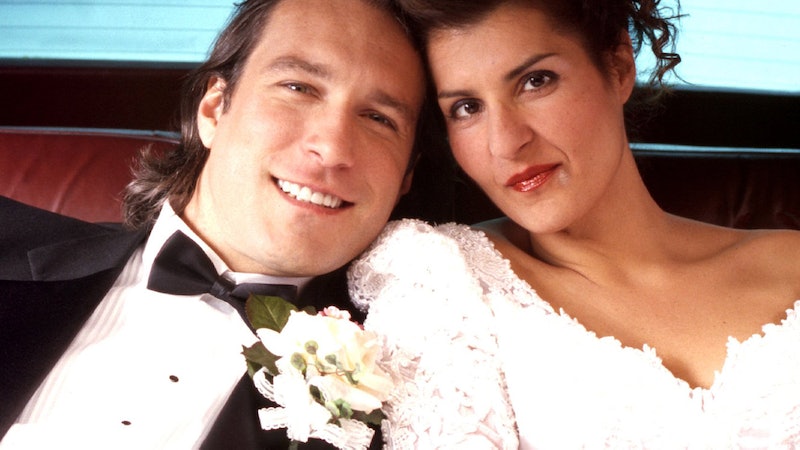 My Big Fat Greek Wedding was the little indie movie that could... gross nearly $250 million. In 2002 Nia Vardalos took us inside her big, bombastic, complicated, and incredible family for a romcom that became a total phenomenon. Now, 12 years later, Universal Pictures is officially signing on to move the sequel forward. Both Vardalos and John Corbett are on board for My Big Fat Greek Wedding 2 and the team is setting its sights on Kirk Jones (Nanny McPhee) to direct. The Vardalos-penned script and Rita Wilson-produced film brings the whole Portokalos clan back togeher again for another wedding that's even bigger and louder than Toula and Ian's.

After the huge success of the original film, the story was adapted to television for one season of My Big Fat Greek Life. Though the Portokaloses may have just been a little too big for the small screen, it doesn't mean they won't make a triumphant return for the sequel. It's been well over a decade since we enoyed "bund" cake with Aunt Voula, and with enough shots of sambuca we can all forget about the unfortunate TV series. The sequel is going to be better than a bathtub full of baklava.

To celebrate My Big Fat Greek Wedding 2 , here are all of the important lessons we all learned from the fabulous original. Enjoy! Opa!

Everything Can Be Cured with Windex

Even when it's your big day, it's not worth missing out on the fun.

Go Outside of Your Comfort Zone

You might find yourself in a new career, a new relationship, or an entirely new you.

Listen to Your Mother

She knows a thing or two.

Food and Drink Make Everything Better

You never know when a vegetarian is coming over.

To a fault. Then the people in your life will REALLY know you.

Love with your whole heart

And accept love when you're greeted with it. Even if it's big and complicated.

More like this
Your Guide To Watching 'Everything Everywhere All At Once' In The UK
By El Hunt and Sophie McEvoy
12 Years Ago, Austin Butler Manifested His Oscar Nom In This Disney Movie Scene
By Jake Viswanath
Rupert Grint Just Shared A *Major* Update About Ron Weasley’s Future
By El Hunt
Sandra Bullock’s Razzies Speech Proves She’s The Ultimate Miss Congeniality
By Sam Ramsden
Get Even More From Bustle — Sign Up For The Newsletter
From hair trends to relationship advice, our daily newsletter has everything you need to sound like a person who’s on TikTok, even if you aren’t.