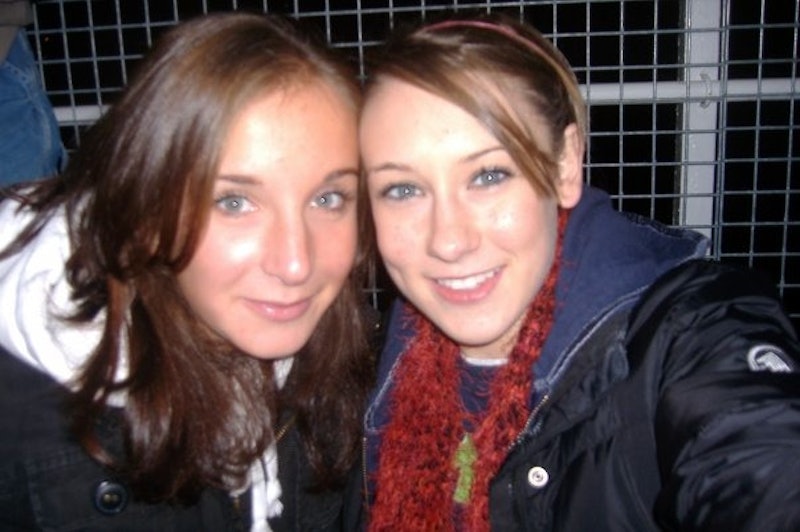 My freshman year of high school, my family welcomed a foreign exchange student from Brussels, Belgium into our home for one year. On Tuesday, her home in Belgium was attacked by multiple explosions carried out by ISIS. And today, though I know she and her family are OK, I can't help but feel irreverent for the time I wasted fighting with my pseudo-sister, as I called her at the time, as if she were my real sister.

Tatiana flew into Indianapolis, Indiana in August 2007. I was so excited to pick her up from the airport. Though I already have an older sister, I was thrilled about the prospect of having another. At the time, I had already envisioned the monuments we would show her in our small town, and the sisterly activities we could do. A traveler at heart, even at a young age, I most looked forward to hearing about her culture and getting introduced to the Belgium way of life. I had not considered actually not getting along with her.

She got off the plane with smile stretched across her face. After traveling for over 24 hours, I'm sure she later said she was relieved to see our cheesy poster baring her name and an map of Belgium, connected by a poorly-drawn plane to a map of Hope, Indiana. We all greeted her with awkward hugs, which she complemented by trying to kiss us on the cheek in typical European fashion.

Though her application to become a foreign exchange student clearly stated she had studied English for five years, I remember worrying if we were ever going to understand her, and if she would ever understand us. Tatiana liked to say "Oh mon Dieu" — French for "Oh my God" — when she couldn't think of the English word she was so heavily seeking.

Before I knew it, we were going to our high school basketball games together, fighting over whose shirt was actually whose, (OK, they were her shirts. They had a European tag. I knew better), and eating family dinners together. She quickly became known as my pseudo-sister, or in public settings, my sister.

Which meant fighting like sisters. It wasn't that I didn't like Tatiana — contrarily, I loved her like my own sister. It was simply hard transitioning into having another. At the time, I was 14 years into a routine with my family, and it was wildly interrupted by her presence.

Conversely, I'm sure it was difficult for her. My parents had to set rules that were atypical to her lifestyle in Belgium. And the people enforcing the rules weren't even her real parents. She was living in a completely different culture, mainly speaking a language that was not her native one.

In the spring semester, just months before she was to go home to Belgium, we had our largest pseudo-sister fight: We played tennis together, and in the final practice before our last home match, we were getting into our friend's car for a ride home. I was out of the locker room first, and typically the first one out got the beloved "shotgun" seat. But when I pushed the seat up and waited for her to get in, Tatiana didn't want to get in the back.

"You always disrespect me. I'm older, so you should always get in the back," she said. At this point, Tatiana had lived with us for nine months, and I was a little bit tired of her always getting her way. I yelled back at her that this was typically how it was done and that "I get the backseat EVERY DAY." She ended up in the passenger seat and I sat in the back, almost crying out of frustration, while our friend awkwardly drove us to our shared home.

We made up the next day, me taking that night to sulk in my room, and her taking the night to talk on the phone with her sisters in Belgium. We both agreed it was silly and I willingly took the backseat home from tennis practice every day from there on out. She even offered me the passenger seat a few times, which I gladly accepted.

I regret not having as much contact as I could with Tatiana, and I still can't help feeling I owe her an apology for my immature, high school freshman ways. I'm sorry that it took and terrorist attack to make me realize it.

When Tatiana flew back to Belgium in early July 2008, I didn't think I was going to cry. Of course, I was going to be sad my pseudo-sister was leaving, and I was unsure when my family was going to see her again, if at all. Still, I thought a part of me would be glad to have my normal routine back. But I cried at the airport. Hard. Noise-inducing sobs.

Thankfully, since then, technology has progressed to include WhatsApp and Facebook messenger, so Tatiana stays in touch with us fairly often. Her job, in the same student exchange organization that sent her to America, has even taken her back for a few visits.

On Tuesday, we didn't have to reach out to Tatiana to ensure she was OK. She contacted her "American mom," my mom, as soon as the news broke. She told us she'd taken the Maelbeek metro to work, but got to her office before the explosion hit the station. On Monday night, her father, Daniel, flew out of Brussels airport and into France for a business trip. They are safe, but lucky.

It's been difficult to keep in touch with Tatiana these last few days. My mom has been the most successful. Cell phone service was suspended, and she explained the Internet was finicky. She confirmed her family is safe, but everything is in chaos. She plans to go to South of France with her boyfriend and his family on Friday.

Like any long-distance relationship, communication is difficult. I regret not having as much contact as I could with Tatiana, and I still can't help feeling I owe her an apology for my immature, high school freshman ways. I'm sorry that it took and terrorist attack to make me realize it. So, Tatiana, while it may seem small and in the past, I apologize for not appreciating you. Even if just for a minute.