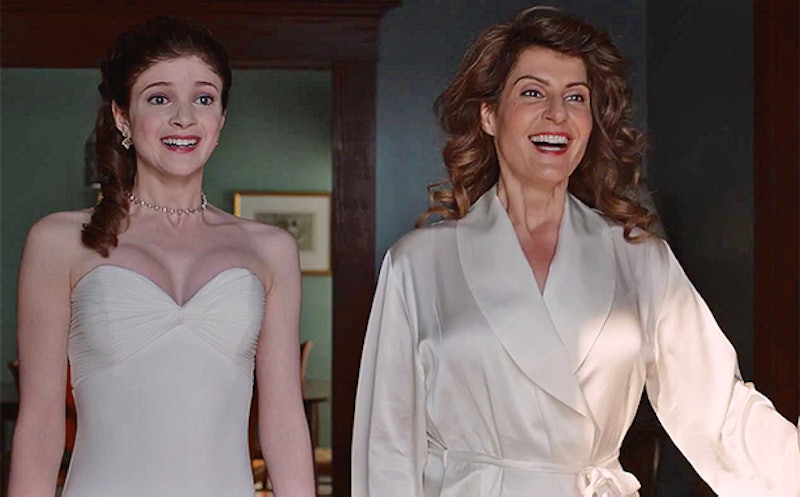 As many will remember, 2002's My Big Fat Greek Wedding was a fun, feminist, funny story that encouraged viewers to follow their dreams and be their own people. It supported the idea of personal growth while maintaining a connection to your family and roots, and this month's sequel, My Big Fat Greek Wedding 2 , hopes to capture some of that same magic. Like the original, this film is enjoyable and often very funny, but as for feminist? Not so much.

My Big Fat Greek Wedding 2 presents an outdated view of how women should behave, reinforcing the beliefs that they are destined to be wives and mothers. This notion was present in the first movie, too, but instead of challenging it, or downright rejecting these expectations as the original did, the follow-up sadly embraces the idea that women aren't anything more than their relationships to men. In fact, it's the very wedding that's at the heart of My Big Fat Greek Wedding 2 that undermines the feminism that the two films seemingly project.

In the beginning of the movie, audiences find beloved Toula (Nia Vardalos) stuck in a rut. She has a 17-year-old daughter named Paris (Elena Kampouris), and her marriage to husband Ian (John Corbett) seems routine and lacking in romance. She lost her job at the travel agency, and is now back working at her parents’ restaurant. Basically, she's in the exact place where viewers first met her at the start of the original, except now she's saddled with even more issues. It's depressing to see, as for all of Toula’s assertiveness and personal growth in the first movie, the sequel has her back to where she started. She’s a wife and a mom, with little passion of her own — exactly what her family wanted her to be in the first place.

Meanwhile, Toula’s dad, Gus, (Michael Constantine) discovers that he and his wife Maria’s (Lainie Kazan) marriage certificate was never signed, so the long-married pair realize that they are newly single. But instead of getting re-married right away, as Gus wants to, Maria holds out for a decent proposal. And who can blame her? As a traditional Greek wife, Maria, cooks, cleans, and takes care of Gus’ medical needs; she does everything for him, and little for herself. She's essentially treated like a nurse. Like Toula, Maria's desires and passions have been pushed aside.

Yet instead of finding ways to give these characters agency and let them find empowerment, the movie simply reinforces old notions of what it means to be a woman. At times, it seems like this won't be the case; Maria, for instance, takes a stand and demands a real proposal and wedding, and both Toula and Paris are inspired watching her say what she wants. But the empowerment talk doesn’t stick the landing. Despite all her talk about not wanting to be Gus' servant and wishing she had her own life, Maria ends up getting married and not making any changes. Even when, during the climax of the film, Gus shows up drunk and doesn't seem to be taking the wedding seriously, Maria doesn't waver. Instead, after briefly leaving him at the altar and lamenting to her daughters, “I could have traveled, wrote poetry, cured disease,” she goes back and re-marries Gus.

Every choice is a respectable one, of course, but Maria’s final decision to overlook her own desires and re-marry Gus is frustrating for a movie seemingly so focused on empowering women. Maria was the character who, in the first film said, “The man is the head, but the woman is the neck. And she can turn the head any way she wants," but in the second, she settles for a life she's disappointed by. Yes, she loves Gus, but remarrying him without considering her own desires isn't what she deserves.

What kind of message is Maria sending her daughter and granddaughter by accepting her treatment as a housemaid instead of a real person with desires and interests of her own? It's no wonder Toula's own life is so depressing to watch. Sure, Ian doesn't treat her nearly as bad as Gus treats Maria, but he still insinuates that she’s responsible for their lack of romance. “When are you going to fix us?” he asks in the middle of a fight, as if he has played no part in their demise. Even when characters like crazy Aunt Voula (Andrea Martin) try to encourage Toula to put a little spark back into her marriage, the advice they give is frustrating. ”You were a girlfriend before you were a wife,” Voula says, and while she might be trying to inspire Toula to be a bit more rambunctious, it’s diminishing of her as a person. It's as if she's saying that women only matter in relation to men.

It's even worse for the teenage Paris. Gus already says plenty of cringe-worthy lines to his granddaughter, insisting that, at 17, she find a nice Greek boy so she can make babies. The movie might want this to seem simply like the adorable rantings of an old-fashioned man, but disappointingly, the characters take him seriously. The fact that Paris does actually end up with a Greek boyfriend in the end sadly conforms to the ideas presented by Gus’ backwards views.

Watching these women's lives unfold in My Big Fat Greek Wedding 2, it's hard not to feel frustrated. I’m not saying that Maria, for instance, shouldn’t have remarried the man she loved if it's what she wanted, but some demands for change wouldn’t have hurt, and the same goes for Toula and even Paris. Unfortunately, the messages of female empowerment that were so present in the first film are undermined in My Big Fat Greek Wedding 2 by its characters and events. It seems that this movie's final message is that women's own desires are secondary to those of men, which is disappointing for a film series that started out so empowering.