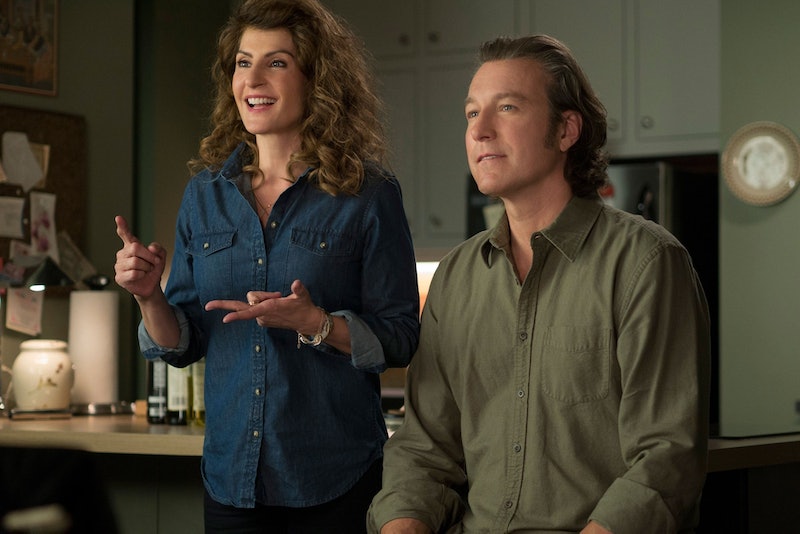 When My Big Fat Greek Wedding premiered in 2002, it wasn’t really on my radar, but I heard from many that it perfectly captured what it’s like to have a big, loud, culturally proud family. And when I finally did see it a couple of years later, I couldn’t believe just how much Toula Portokalos's family resembled my own. Though I’m of Italian and Irish descent and not Greek, I totally identified with Toula's experiences; our families both yelled a lot, cooked a lot, ate a lot, drank a lot, and argued a lot, and, most importantly, were extremely proud of their heritage. It was great to see my own life reflected on-screen, and so I was thrilled to see that the movie's upcoming sequel, My Big Fat Greek Wedding 2 , looks not only to recapture the fun and magic of the first film, but also to share its emphasis on the importance of family culture and having reverence for your roots.

If you haven’t seen My Big Fat Greek Wedding or know little about its sequel, here’s a quick run-down. Toula, played by Nia Vardalos, is a shy, unmarried 30-year-old who's surrounded constantly by her eccentric Greek family. She meets the non-religious Ian Miller (John Corbett), and the two fall in love and get engaged. But getting the pair up the aisle and to the Greek Orthodox altar turns into a hilarious struggle to mesh Ian’s “normal,” small, quiet family with Toula’s giant Greek posse. The film hilariously captures the experience of what it's like having a big, Mediterranean family. Some of the trailers even interchanged the word Greek with Irish, Italian, Polish, Brazilian, Puerto Rican, etc. because the story and family quirks were so universal, and its ability to capture a certain type of family and culture is what made the movie such a massive hit.

Years after My Big Fat Greek Wedding came out, I had my own wedding, which, like Toula's, was a big cultural mish-mash. I'm Irish and Italian, and my husband’s family is Jewish, so the whole event was a swarm of different traditions. We had a chuppah, a unity candle, and a Celtic hand-fasting, and my husband even broke the glass at the end of the ceremony. There was a lot of eating, a lot of drinking, and a lot of dancing. During the reception in My Big Fat Greek Wedding, Toula’s father tells a story of how the root words for Portokalos and Miller may be apple and orange, but that in the end, “We’re all fruit.” That same sentiment came to life in my own wedding, when my Irish and Italian relatives were lured onto the dance floor by my husband’s Jewish family for their first Horah. They laughed. They missed steps. They had no idea what they were doing, and they all had a blast.

It's easy to miss out on this. From the look of the trailer for My Big Fat Greek Wedding 2 , Toula and Ian’s daughter appears to be totally over her heritage (as Toula was once) and would rather assimilate into what she might consider a more “normal” American family. But I hope that in the end, she learns the importance of holding on to one’s culture, and chooses to embrace it, like I have. Recently, I got a chance to speak a bit of Italian while traveling, and it reminded me that I hadn’t spoken any in years. I learned much of the language by listening to and talking with my father and grandmother, but as my dad is fluent in English and my grandmother passed away a few years ago, we don't really have to speak in Italian anymore. Yet when I said some Italian words the other night, the feeling of family and culture came rushing back to me in all the best ways.

Families who have, at one point or another, immigrated to America (and that’s pretty much all of them) may struggle to become more Americanized, but movies like My Big Fat Greek Wedding and, hopefully the upcoming sequel, emphasize how important it is to keep your culture close and pass it down through generations. I don't know if I’ll be able to teach any of my potential future kids to speak Italian, or even Gaelic, but I can share family recipes, stories, traditions, and history. I hope, and am optimistic that, the Greek Wedding sequel continues to value what Toula's family can contribute to the world, and to each other, due to their heritage. We might not all have huge families, but the series' focus on celebrating the traditions and relatives we do have, whether they're related to us by blood or by choice, is a lesson we should all take to heart.

More like this
Kumail Nanjiani & Emily V. Gordon’s Relationship Timeline Is Literally A Movie
By Jake Viswanath
Olivia Wilde & Harry Styles Are Reportedly "Taking A Break" After Almost 2 Years
By Jake Viswanath and Radhika Menon
Read Dan Levy's Heartbreaking Message After The Club Q Shooting
By Stephanie Topacio Long
Hinge's New Feature Makes It Easier To Explore Non-Monogamy
By Lexi Inks
Get Even More From Bustle — Sign Up For The Newsletter