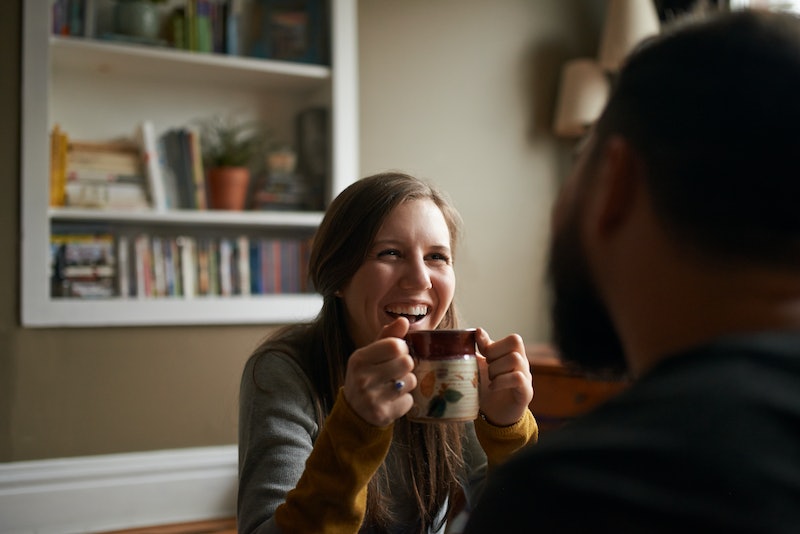 You're at a party. You run into someone you kind of know but not well enough to talk anything more than pleasantries with. Maybe this person also has little to no or even a bad sense of humor. There's no way around it either: you're going to run into them, and at this point pretending to look at your phone isn't going to get you out of it. Thirty minutes later, and you're still listening to them talk about the mole they had to have removed last week. In excruciating detail. And they haven't come up for air, so you haven't been able to get a word in. Does this sound like a familiar nightmare yet?

Getting out of boring conversations while still being polite can sometimes be tricky. When all you want to say is "I have to.. Go and do a thing...," finessing the situation takes a little more than a Chandler Bing-style awkward getaway. Especially if you're likely to see the person you're escaping again or even on a regular basis. And just because a conversation is boring, it doesn't mean the person you're having it isn't nice, or it isn't someone you love. I mean, I'm not naming names, but I've certainly been caught in conversations with loved ones that have made me feel like I aged a year. I'm sure you have, too. Here are some ways to get out of a boring conversation politely.

This is so risky. If you're at a party, the other person might say "Yeah, me too!" and follow you, stand in line with you, and continue the boring conversation with you. But it's a pretty solid excuse to leave a conversation that's not doing anything for you. No one ever suspects your need to urinate. It's necessary. More necessary than being part of the conversation in fact. No hard feelings, and you get away easy. Just make sure you actually visit the restroom if it's in the other person's eye line, otherwise you'll just look like kind of an ass.

2. Go Get Something, Like A Drink Or Some Food

If the glass in your hand is empty, you're in luck. The excuse of a refill is a legitimate one in a social setting, whether you're drinking wine or water. Likewise, if food starts going around, declare yourself starving and excuse yourself momentarily. You'll never make it back to the conversation obviously, but that's a natural part of parties — you get caught up in other conversations along the way, it's just part of the social flow. Plus, you get food in this excuse. So it's a double win for you.

3. Notice Someone Across The Room

Chances are there's someone at the party you haven't spoken to yet that you'd like to speak to. If you've been in your boring conversation for a while, it's perfectly OK to say, "Oh there's Tina, I'd love to say hello to her!" Again, that's the nature of the flow of the party. In this scenario you might even invite Borey McSnoreson to join you where you can start a new, more exciting conversation with Tina.

When you have a close friend nearby, they might be able to save you. Without doing anything obvious to get their attention, hopefully your friend knows you well enough to know when your brain has gone numb in conversation. I once saw a close friend at a party talking to someone I knew they found pretty boring, but who was a nice person they wouldn't want to be rude to. So I shimmied on over and joined the conversation, changing the topic and the dynamic entirely. That's what friends are for, and hopefully you've got one around to help you out.

5. Walk Away When The Other Person Brings A Third Party To The Conversation

If the person you're talking to brings their friend into the conversation, and it's someone you've never met, this is the perfect time for you to make an exit. Allow yourself to be introduced to the new person, and then politely say something like "I'll let you guys catch up!" as you walk away. To be extra secure (they might be so nice they tell you to stay regardless), add that you're going to check in with one of your friends at the party.

6. Use It As A Networking Opportunity

This is a great way to get out of a boring conversation at a work or professional event. If you see someone around that you'd like to meet, especially someone that might be beneficial to know for your career, ask the person you're talking if they can introduce you. Obviously pick someone they know and can introduce you to, but you get the drift. Boring conversation over, and you're doing some neat networking instead.

Let's get this straight: don't sit/stand around in a social situation looking at your phone. Leave your phone in your bag or coat pocket. Not only does this make you a more fun, sociable person, it also gives you a fantastic out if you're caught in a boring conversation. You can say that you need to check in with your S.O. (if they're not at the party), or that you're expecting an important work email and you just need to go use your phone quickly. Don't be quick.

Getting out of a boring conversation politely doesn't always mean leaving it. You can change the subject, or find a way to transition the conversation into something different. Look for an in, whether it's a pause where you can start a new topic, or a current topic that you have a fun anecdote about. You can do it!