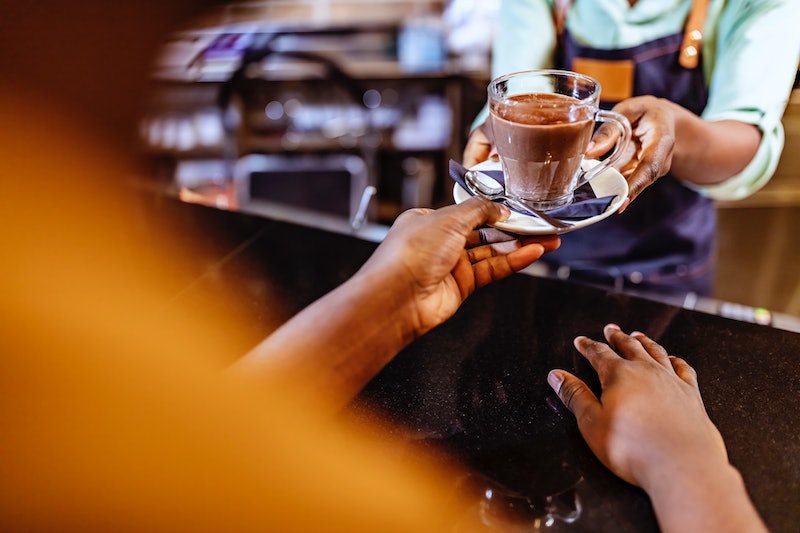 If you're anything like me, you dread the idea of giving up caffeine. Personally, I grip my morning coffee mug like my life proverbially depends on it, which is a habit I've had since high school. That said, for those who do want to kick their caffeine addiction, it's important to know what happens to your body when you give up caffeine — because the effects can be pretty intense.

When it comes to knocking down your caffeine consumption levels, it's also important to think about your source of caffeine: I'm mostly a coffee drinker, but there is also caffeine in tea, matcha, chocolate, etc. Depending on your reasons for lowering your caffeine intake, you may want to cut it out cold turkey or transition into lower dosages of consumption. While I genuinely can't imagine getting through a day without some source of caffeine, I can at least imagine myself transitioning to tea in an effort to cut down on what is (probably) way more than the recommended amount of coffee I consume every day.

Why does caffeine have such a big impact on our health? Basically, caffeine is a stimulant that interacts with your central nervous system. The regular ingestion of caffeine (like other substances) can alter your brain's chemical makeup, which is where your cravings (or dependence) come in. Studies show that regular consumption of caffeine can cause a mild dependence, so when you cut it out, you may experience "withdrawal symptoms" depending on what your original consumption was like.

However, because withdrawing from caffeine doesn't have the same life-altering impacts as withdrawing from other drugs or alcohol, generally it isn't considered a "real addiction" when it comes to diagnostics and treatment. Still, if you're looking to cut down on your caffeine intake, or jump off the ship entirely, it's important to know what weird things happen to your body when you quit caffeine.

1. You Will Experience Pounding Headaches

Seriously: The headaches are a major one. I start experiencing headaches within a few hours of waking up if I don't have my morning coffee. Many people who quit caffeine claim the headaches are the worst part. You can keep your headaches at bay by consuming a small amount of caffeine (say, 25 mg instead of the standard 150 mg in a pot of coffee) but if you're trying to quit caffeine entirely, the headaches are something you may have to tough out (or see your doctor about in regards to pain relief!). Some people also find yoga or meditation helpful to ease the pain.

2. You Will Be Exhausted

Personally, this is my biggest fear: I'm a very scheduled person, and I'm used to accomplishing a specific amount of work on a daily basis. While I think ethic work is tied somewhat to personality and personal drive, I also realize that for myself, it's tied to caffeine. Basically, when you stop consuming caffeine, you're losing that "lift" or "boost" your brain gets when you consume caffeine, and if you quit after maintaining consumption for a while, your body is going to take some time to get back to regulating your natural "boost" to a place that works well for you. While there are definitely ways to get energy in the morning without caffeine, I would suggest checking those out and having a game-plan before you kick the morning coffee; otherwise, you might find yourself falling back asleep!

3. Your Concentration Will Go Out The Window

If you've ever felt the need to have a cup of coffee to kick your concentration back into gear, you are not alone. However, some studies suggest that this is actually an act of dependency: Essentially, when we're having our usual caffeine intake, we're not actually experiencing a boost in productivity or concentration in comparison to our non-coffee drinking peers. Instead, we're merely off-setting the "withdrawal symptoms" our body is taking part in because it's been too long since we've last had our dose of caffeine.

4. You Will Feel All Of The Rage

When you were a kid, did your parents ever tell you to not ask them questions before they had their morning coffee? Do you ever find yourself pointedly ignoring a certain coworker's desk because you know she hasn't had her coffee yet and you don't want to inadvertently annoy her? When someone who regularly consumes caffeine doesn't get it, it's very normal for them to display signs of irritability. Basically, your brain has no idea why it's not getting the caffeine it's been used to and your body becomes hypersensitive to outside stimulations, which is why if you're kicking caffeine that loud talking in the lunchroom you can hear from your desk can feel so annoying.

5. You May Morph Into A Slug

Ah, yes. Sluggish behavior. If you're like me, the smell of freshly brewed coffee is the best source of motivation to get out of bed and actually begin my day. Without coffee, I'm way more likely to stay in bed and keep sleeping, or just idly sit on my phone until the absolute last minute. If I were to cut out caffeine, I'd definitely start the process on a day where I didn't have work or school obligations, because I can only imagine how little I'd actually get done. While caffeine withdrawal symptoms do extinguish over time, it's very normal to feel extreme lethargy and sluggishness when your body is first without the stimulants from caffeine.

So, there you have it! Caffeine effects our bodies in some intense ways, and it seems that going without caffeine once you've developed a regular intake can lead to some serious reactions from your body. Luckily, caffeine withdrawal symptoms do eventually end, so if you want to kick your habit, it is entirely possible. If you're worried about your caffeine consumption, it's always a good idea to talk to your doctor about your intake. Your health is serious business, so it's always smart to keep track of how your body reacts to substances (including seemingly innocent coffee and tea) and have a conversation with your doctor about your health.