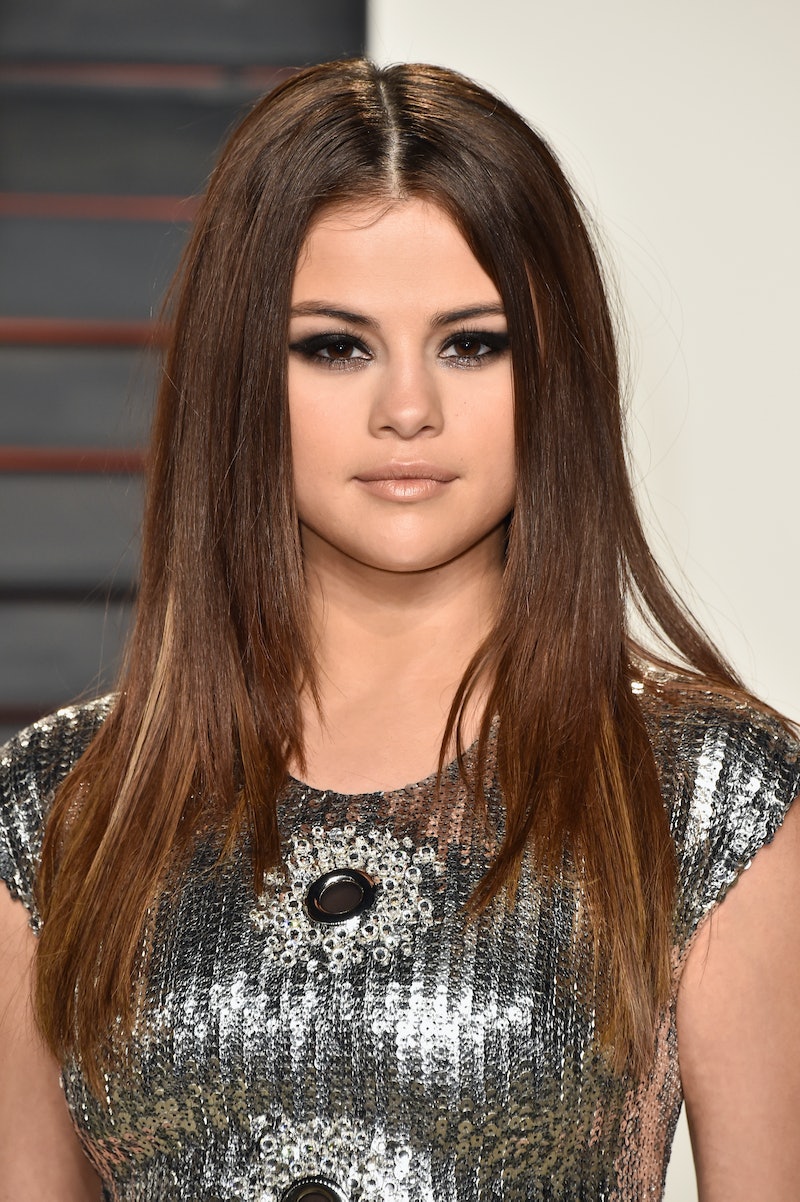 You know that frustrating feeling when one of your friends keeps going back to someone who's totally wrong for her, but you can't say anything about it because that never leads to anything good? I'm feeling that way about Selena Gomez right now, except she's not actually my friend and the reason I can't say anything about it is because we don't know each other. After Justin Bieber posted a throwback photo of the two of them kissing, I feared the worst. Could they be getting back together? Now, it seems that might actually be happening. Wednesday night, Gomez was spotted at a Bieber concert, which means at the very least, they're friends. My opinion on this situation can be easily summed up in one word: UGH.

Fans at the concert — which was at L.A.'s Staples center — spotted Gomez hanging out in the sound booth while Bieber performed. Unfortunately, there's photographic evidence so this is a real thing that actually happened. And as much as I'd love to believe this is just a case of a friend supporting a friend, it doesn't look like it. In fact, it seems like they're definitely headed down the same path they've been down many times before, and if you ask me, it couldn't be a worse idea.

OK, so I'm willing to admit that in their heyday, Bieber and Gomez were actually super adorable together. Back before Bieber's rebellious streak came out to play, their relationship made a lot of sense. They were both young and growing up in the spotlight, and they both had to deal with achieving an insane amount of fame really, really quickly. Because of that, they had a lot of common ground, and shared experiences like that are a great foundation to build a lasting relationship on. But between then and now, they've broken up and gotten back together so many times that it seems obvious they've grown apart — obvious to everyone but Gomez, apparently.

And even though I'm someone who's only seen this happen from a distance, it's incredibly frustrating that Gomez keeps appearing to be over it... and then goes back to Bieber again, time after time. So if you're feeling that way too, I totally understand. We might just be onlookers, but I feel like a lot of people also see Gomez as a really sweet, genuine person who deserves good things in life — not a boyfriend she told Rolling Stone she's "done talking about."

In fact, Gomez herself has said that getting over Bieber required an epiphany moment, and that it was a really difficult decision to make. Last year, she told Elle that before performing "The Heart Wants What It Wants" at the 2014 American Music Awards, she was finally ready to move on, so why would she change her mind after finally seeing the light? She said:

Everybody was talking about the same thing: my relationship. I was so exhausted. I said, I want this [performance] to be the last time I have to talk about this. And acknowledge this feeling. I was kind of devastated. I was like, This is all I have right now. This is gonna be it. And all I want is to move on. It was a huge weight lifted off me.

The fact is, it's really hard to get over someone, especially when there's a lot of history there, he was your first love, and the entire world knows about the ups and downs of your relationship. So since Gomez was finally able to do it, it makes me bummed for her that if they're back together, she's going to have to start rebuilding her life again, even though she's already been through that before. It's not an easy thing to do, so it sucks that she might have to do it more than once. And for someone who cares about celebrities the same way most people care about their children, I want the very best for her, and I'm not convinced Bieber is it.

If a genie offered me three wishes, I'd wish for a few million dollars, unlimited pizza, and for Selena Gomez to never go back to Justin Bieber ever again. But at this point, all hope could be lost — genie or not. After all, Taylor Swift is her BFF, and if she can't talk some sense into Gomez, nobody can. But since only Gomez and Bieber truly know what happens in their relationship, I hope I'm completely wrong, and that they do eventually live happily ever after, if that's what she wants.

But in the meantime, I'll be over here, banging my head on my desk. Do you think a strongly worded tweet to Bieber would convince him to treat her right this time?

More like this
Selena Gomez Explained Why A Past Album Cover Made Her Feel “Really Ashamed”
By Grace Wehniainen
Britney Has Been Granted A Restraining Order Against Her Ex-Husband
By Bustle Staff
Who Is Betty Who Dating? The Australian Singer Is Married To Her Tour Photographer
By Radhika Menon
Photos Of The 'Elvis' Cast vs. Their IRL Counterparts Will Have You All Shook Up
By Grace Wehniainen
Get Even More From Bustle — Sign Up For The Newsletter