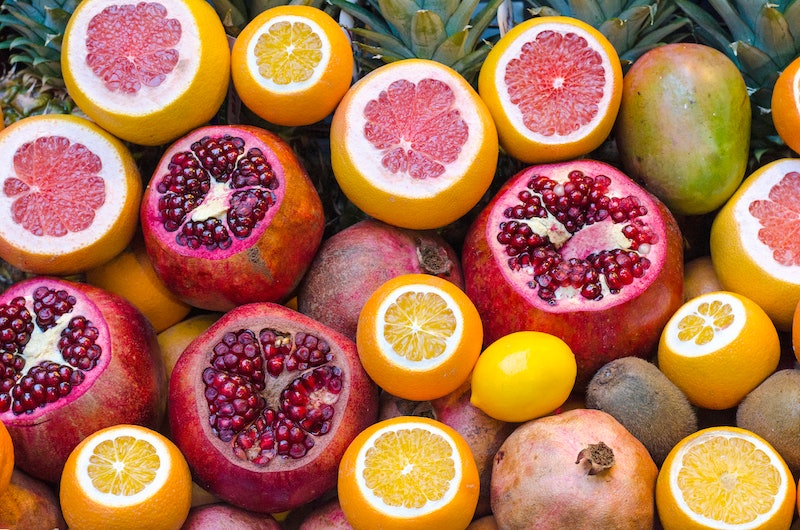 I'm no beauty maven. I only just started to moisturize my face; prior to this, I never did anything other than put a BB cream with SPF onto it every day. So I am deeply pleased to find out that there are various dietary ways to make skin look plump and fresh without requiring a lingering, embarrassing stay in the cosmetics aisle asking what on earth a "toner" is and why I can't eat the delicious-sounding wheat and honey face mask. (Yes, I tasted it. Yes, I was disappointed.) The link between foods, nutrition and skin health isn't organic mumbo-jumbo; nutrients, vitamins and minerals all have a part to play in the health of the epidermis, and frankly it seems like much more fun to eat a salad for a "glow" than have somebody suspiciously poking my face with mysterious creams.

Needless to say, if somebody tells you a diet of XYZ is going to give you "perfect" skin, they're selling you snake oil. Skin health is a very complicated process and no diet will be able to solve everybody's skin problems all the time, (not even cutting out dairy, though that does seem to help the majority of people). However, the seven foods on this list have certain scientific benefits for your skin health, from protection against UV damage to boosting collagen production, that might make you sit up and start planning your weekly shop.

Here are seven foods to eat if you'd like to have healthier skin. As always, keep updated on the science; a new study may come out tomorrow that says tomatoes actually cause skin to fall off, and you'll want to know if you're planning to make pasta.

It's important for you to get your dose of citrus fruits if you want good skin. It turns out that vitamin C is an antioxidant (something that prevents cell damage), and works to limit UV exposure in the skin (though it's not as good as a sunscreen, so don't eat a bunch of oranges and go to the beach believing you'll be protected). According to the Linus Pauling Institute, research has indicated that vitamin C has a big role in the maintenance of collagen levels and the reduction of photodamage to the skin from UV light. Apparently it's still uncertain whether topical applications in creams are as useful as just getting it in your diet, so forget the lemon face cream and get your five servings of fruit a day.

Even if you're not much of a nut eater, the maintenance of your skin might compel you to get a bunch of brazil nuts next time you're at the supermarket. The reason? Brazil nuts are packed full of selenium, which acts as an antioxidant and works as a photoprotective substance that helps to reduce the damage of sunburn and tanning. You can also get it from chia seeds, brown rice, and cruciferous vegetables like broccoli and spinach. You're only supposed to eat 55mg of selenium in a day, though, so no need to go too crazy.

Yes, they do actually help you see in the dark, but carrots are actually also a skin-booster with serious science cred. Apparently a bit of vitamin A, which is produced if you eat carrots because of their beta-carotene, works as a preventative measure against over-production of cells in the upper level of the skin; skin's massively sensitive to retinoids (another term for vitamin A and its compounds), to the extent that varieties of it are used in acne creams and medications. Retinoids help to prevent skin damage, and seem to have an effect on the sebaceous glands that cause acne, though when they're consumed as carrots their effect seems to be dampened, so don't trust carrot salad to solve all your pimple problems.

Omega-3 fatty acids, which are found in oily fish and some nuts, are considered the "healthy" fats, seriously necessary for healthy functioning of the human body. One of their benefits happens to be in skincare; Women's Health suggests that the fats may reduce the body's reaction to inflammation and prompt higher water retention in some cells, increasing "plumping". WebMD explains that omega-3s are essential to maintaining the health of cell walls, including those of the skin, and help their ability to retain nutrients and expel waste. Flaxseeds, walnuts, and fish like salmon are your best sources; make sure you know what classifies as an "oily" fish before you go to the grocery store, as other types don't have the same benefits.

Tomatoes may have had a slightly peculiar history (they were first thought to be poisonous when brought to Europe), but their health benefits for the skin are now scientifically recognized. They're a massive source of antioxidants, including vitamin C (our old collagen-helping friend), but they also have a selection of nutrients called carotenoids, which are part of a class named phytonutrients. (Yes, I know your eyes are crossing, but hold on.) Phytonutrients have been scientifically proven to help with wrinkles and protection against UV light, though again, you need to put on sunscreen and not just rely on your tomatoes to keep you safe.

Prawns, spinach, pumpkin seeds, and cashews are all big sources of zinc, which, it turns out, is a vital part of skin health. Zinc's presence in the skin is a part of its protection against photodamage by UV light, which is why so many sunscreens contain zinc components. It might also be an antioxidant, though we're not sure, and it's part of some acne medications. It seems that low zinc levels may be correlated with acne, although the science isn't completely secure, but it won't hurt to up your zinc levels with a seafood or superfood blitz.

Sweet potatoes actually share some of their skin-boosting characteristics with carrots: it's the presence of beta-carotene, the precursor to vitamin A production, that makes them friends of the epidermis. Apparently, they're also a serious vitamin A container; according to the FDA, one large one contains more than your total daily dose of beta-carotene. (No, you shouldn't overdose: you can in fact get yellow or orange skin from drastically too much beta-carotene, though it's difficult to get to that point without subsisting almost entirely on it.)