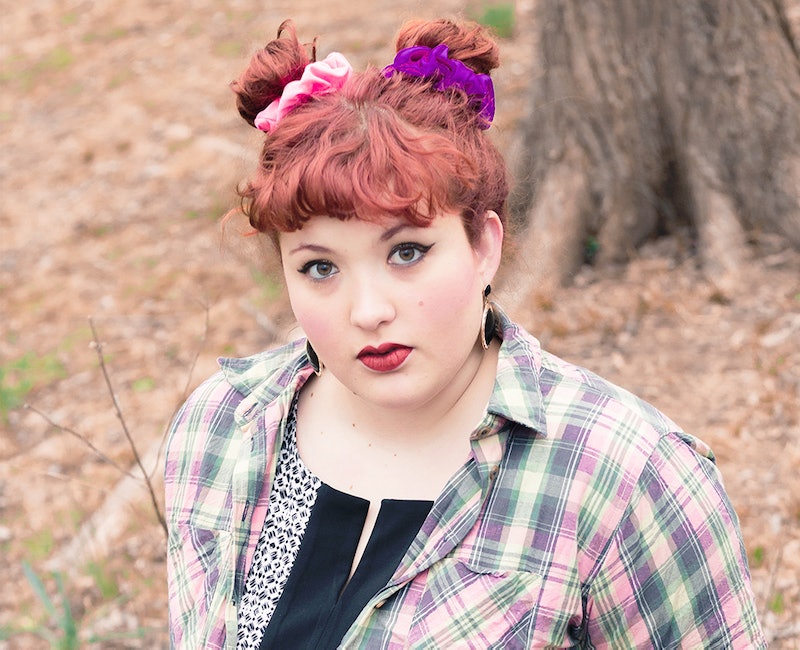 For most of my life, I struggled with humor, particularly when it came to finding humor in difficult situations. I was never “the funny girl." My inability to “just laugh it off” combined with a penchant for being “too sensitive” was made apparent whenever a joke or comment I perceived as nasty or cruel was made in my vicinity. Which happened a lot.

Before finding fat positive dialogue online as a 20-something, any remark about my weight or body type would send me into a rabbit hole of self-hatred. Whether it was a joke about my ass not allowing my little brother to sit comfortably in the back seat with me or a, “No wonder you’re so fat,” comment sent to me via Twitter after I shared an image of a steak and ale pie I was about to attack with gluttonous intentions, jokes about my body were enough to bring up all my internalized self-shaming and insecurities.

When your body is marginalized in any way, the last thing you usually want is for that body or an aspect of your identity to be turned into a comedy sketch. A lot of fat people are forced to get used to being the recurring joke on television (shout-out to Monica, who Chandler never would’ve married if she still looked like her former fat-slob-self). We get used to films that only depict our body type as being inhabited by the funny but kind of dim sidekick, the designated ugly fat friend, the loner, the villain, or the hyper-sexualized floozy. To take offense at or feel hurt by blatant fatphobia is beyond reasonable, as is taking those experiences and using them as fuel for one's activism.

But as I’ve grown older, I find my sense of humor changing. It’s not that I’m any less offended by how ingrained issues of size discrimination are, or how not-talked-about their intersections with class and race are. It’s not that I want to fight against these things any less. Rather, I’ve just sort of learned to find humor in particular remarks that might've previously lead to a tear or two.

Recently, The Daily Mail posted a story about former Top Gear presenter Jeremy Clarkson. It consisted mainly of images of the British celeb on the beach while on set for his new Amazon show. Said article was headlined with, "Clarkson shows off flabby figure on Caribbean jaunt with Top Gear pals," and featured some not-super-clever fat jokes throughout. The thing is, the story was a result of Clarkson referring to himself as a "six-foot-five beluga whale with idiotic tan lines" in a clip for his upcoming motoring show.

Top Gear is admittedly one of my guilty pleasures. And the not-at-all-politically-correct Clarkson has certainly perpetuated a fair share of fat shaming rhetoric in his day (often geared at the American populous). But now that he’s older and fatter himself, he's seemingly been able to maintain a certain sense of humor in regards to his body. He's not necessarily someone who actively wants to be fat, but it's happened anyway. And in his own Jeremy Clarkson style, he's been able to poke fun at himself in such a way that'll likely make it more difficult for others to hurtfully poke fun at him. My instinct tells me that if he stumbled upon The Daily Mail's article, he'd laugh about that, too.

More interesting perhaps than Clarkson's ability to compare his body to that of a giant sea mammal without any hint of despair or self-deprecation were the comments accompanying the story. From the misguided, "[Where are] all the feminists whining about fat shaming when you need them? [...] Truth is men get the same crap said about them, only difference being [that it's] socially acceptable when it's said about men," to the folks clearly living in a tabloid-free universe proclaiming, "I really am not a fan of Jeremy but the spare tire and flabby remarks are unkind and would never be said in relation to a female celebrity for fear of the backlash," people had lots to say.

But the remark that struck me most was, "Stop crying over how he's being fat shamed as well. He's a man and can take it. Women in the other hand take these things to heart and that's why it's different with them." There are a whole myriad of issues with this statement, among them the massive play on traditional gender roles and stereotypes, as well as implication that there's something wrong with taking insult and fatphobia to heart. There isn't. Those feelings are 100 percent valid. Yet I can't help but wonder whether learning to process things with a hefty grain of salt and comedy — in such a way that the thing people most often use to insult you can become a source of empowerment — might be beneficial for humans of all sizes.

This isn't to say that we should all keep perpetuating the concept of fatness as a joke, or any body type as a joke for that matter. At least not in the way we joke about these things now — whereby fatness is still characterized by a lack of desirability in all connotations (from the aesthetic to the clinical to the economic).

As Bustle's Georgina Jones wrote of wearing fat suits at Halloween, "By wearing a fat suit — regardless of whether it's to dress like a specific character or not — the person sporting it is essentially saying they find fat people laughable. They're openly invalidating plus size individuals for what they look like, and turning somebody else's appearance into a joke." If ever I see someone wearing one of these — be it IRL or on television á la Betty Draper for a couple of seasons of Mad Men — my discomfort is personally pretty real. They're using a part of my identity (and that of many others) flippantly, and in a way that is normally meant to represent that the person in question has "let themselves go" or is somehow a lesser version of their thinner self. When I talk about reclaiming humor in intersection with fat politics, it's more about a personal reclamation — rather than giving everyone who mocks or criticizes fat bodies a free pass.

Personally, I want to able to laugh at myself. I want to be able to say that I have thunderous thighs and bitch about chub rub in a way that isn't met with the assumption that I must hate my lack of a thigh gap. If my stomach is jiggling in the wind as I walk through Coney Island, I want to giggle with my partner about just how much I resemble a gelatinous snack. I want to openly and verbally revel in being compared to a whale. After all, they are majestic and beautiful and big.

Ultimately, I don't want the people who muse, "No wonder you're fat," after they see me posting images of an ice cream I've eaten to ever have the upper hand. For me, learning to laugh at that sort of rudimentary and unoriginal fat shaming so many folks partake in and it greet it with an appropriately catty, "You caught me," atop my smiling face, has been far more conducive to self-love and self-respect than allowing mindless jokes to have control over my self-image.

This isn't to say that it's always going to be easy, or that "laughing it off" is appropriate for every situation and every individual. There are layers of hate to every crude, crass, or downright cruel remark made, and nothing people say (body shaming commentary included) is uttered in a vacuum.

I only know that from the moment I saw actor Gabourey Sidibe tweet, "To people making mean comments about my GG pics, I mos def cried about it on that private jet on my way to my dream job last night. #JK," in response to Internet trolls fat shaming her at the 2014 Golden Globes, I've felt more equipped in my own handling of body shaming barraging.

She also kind of inspired me to remember that my fatness can be funny, if on my own terms: That fat bodies — like all bodies — do weird and wonderful things. And that it's OK to laugh about those things, if that's what feels right. Sidibe responded with humor and a dose of sarcasm in a situation that understandably had the potential to cause upset. In being able to do the same, I've become more at ease in my own body, and more unapologetic in my positive feelings towards my fatness.

More like this
What’s The Kibbe Body Type Test That’s All Over TikTok?
By Marilyn La Jeunesse
The Most Gorgeous Plus-Size Looks From The Met Gala
By Dominique Norman
BIPOC Designers Made Some Of The Met Gala’s Best Looks
By Dominique Norman
How Sunnies Face Is Championing Filipino Beauty
By Kristin Corpuz
Get Even More From Bustle — Sign Up For The Newsletter