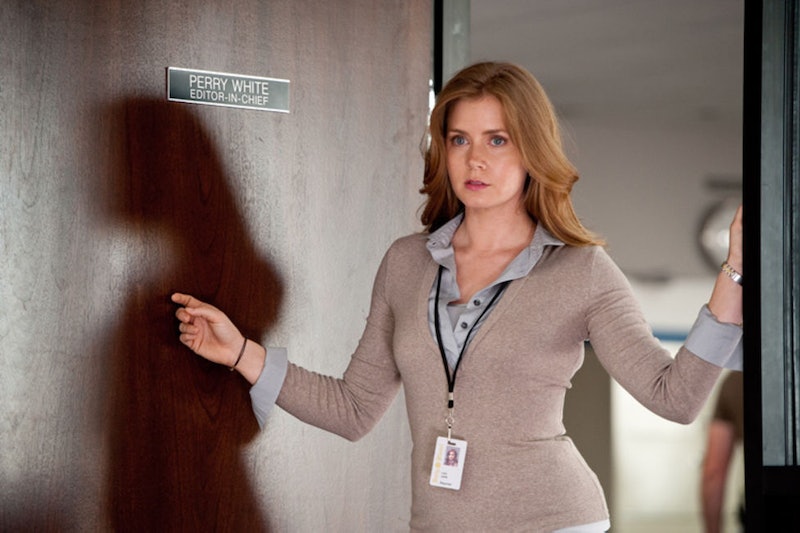 Anybody who knows anything about Superman knows Lois Lane. The love story to end all superhero love stories, Lois and Clark have starred in countless comics, novels, television shows and movies together, and over the years, Lois has evolved from Superman's girlfriend to his equal and partner, a strong and capable character in her own right. Most recently, as played by Amy Adams, Lois was one of the few Man of Steel characters to return in Batman v Superman: Dawn of Justice , and, arguably, the film's female lead. Yet instead of being the same strong, important character she was in so many other iterations, BvS saw Lois Lane as little more than a damsel in distress, with a storyline so confusing and strange it's barely worth remembering.

Although Batman v Superman insists that Lois is still a bold, capable journalist, her scenes speak otherwise. Many of them feature Lois in some kind of trouble, falling off buildings and captured by soldiers, in need of being saved by Clark. The duo's relationship is not much deeper than that, unfortunately. In the first real moment between them, Clark comes home after saving Lois from an African warlord (long story), and Lois tells him she worries that his constant saving of her will cost him too much one day — all while sitting naked in the bathtub. Instead of the scene being an interesting conversation about the duo's relationship and the nature of heroism, it ends with a fully clothed Clark jumping into the bathtub with a giggling Lois. It's just one of the countless missed opportunities in BvS where the filmmakers could have explored the real complications of Lois and Clark's romance, but instead focused on something superficial. (And really, I think I speak for everyone when I say that the lack of Superman abs just adds insult to injury.)

Later on, it gets worse. After the Capitol is blown up during Superman's Senate hearing, Superman disappears, telling Lois that he's afraid he's not a hero to humans anymore. She wants him to believe that there is still hope, but he seems defeated, convinced that humans will never accept him. You'd think hearing your boyfriend tell you he thinks he's too alien to be with you might give a woman like Lois some cause for action, but instead she lets him fly off without so much as a holler, something that seems quite out of character for her. And again, instead of exploring the main conflict in Lois and Clark's relationship — he's literally an alien — the movie simply expands upon Clark's journey, following him to the Fortress of Solitude, while ignoring Lois' completely. The filmmakers might think they're adding dimension to the characters, but really it's more like a cruel tease of the greater story that could have been.

But the biggest inconsistency in Lois' character comes during the big battle at the end of Batman v Superman, when she dumps a Kryptonite spear into the water after Batman and Superman take off to defeat Lex and Doomsday. Lois, a smart, capable journalist who fights for what she wants and gets stuff done, is just going to throw away a weapon crucial to her boyfriend's survival? Nobody would do this, let alone a powerful reporter. I just don't buy for a second that Lois would look at Kryptonite, the one substance that can harm Superman, and think that it would be safe floating in the ocean somewhere. Yes, it's true that she later risks her life to dive back into the water to retrieve the spear. And, yes, it's also true that after Superman has to save her from drowning (yet another damsel in distress situation), she gets to save him (sort of). But, it doesn't change the fact that her actions feel like a betrayal to her character, and that's incredibly frustrating.

It's truly sad that not only did the filmmakers ignore Lois' potential, but that they decided not to take advantage of Amy Adams' talent. Adams is a five time Oscar nominee — she's the best actor in Batman v Superman by a mile. So why is she given so little to do? I understand that Zack Snyder wanted to use the film to set up Justice League , which required a lot of story to go into one film. But did we need all those Batman nightmares and super slow-motion flashbacks at the expense of a fully-formed Lois who's way more than just Clark Kent's love interest?

Seeing such an important female character — a rarity in traditional comic book films — stuck in a nonsensical storyline and not getting worthy scenes is so disappointing. Lois deserved far better from Batman v Superman than what she got. There are a lot of awesome things about Lois Lane, and Adams could definitely have shown them off, if only the filmmakers had given her the chance.