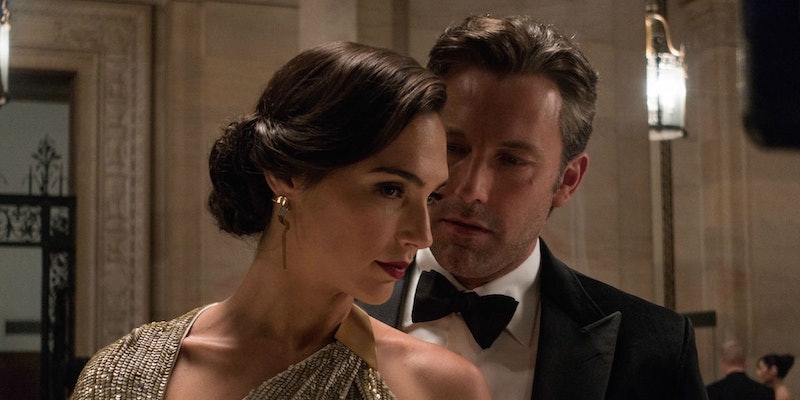 The battle between Batman and Superman has been unleashed upon the world with the release of Batman v Superman: Dawn of Justice, and the film looks to accomplish a lot in its 153 minute runtime. Not only does the movie feature the titular fight between the Dark Knight and the Man of Steel, it also sows the seeds for a number of other movies. The multiple DC universe Easter eggs in Batman v Superman lay the foundation for the next several years of Warner Bros. superhero movies, but if you missed them that's OK. I've compiled the most important ones right here.

I should disclose that this post will only be covering moments in the film that make reference to the DC cinematic universe, and not ones that refer simply to the comics. For example, the movie lifts a ton of visuals, and even some lines, directly from Frank Miller's classic four issue miniseries The Dark Knight Returns , and while those are definitely fun to spot for fans, they're not really relevant to the DC cinematic universe moving forward. Also, due to the nature of this article, there are a bunch of spoilers. So if you haven't seen the film and don't want to be spoiled, this probably isn't the article you're looking for. But if you've seen it already (or if you just don't care about spoilers), here are nine Easter eggs in Batman v Superman that allude to a larger DC Universe.

A photo is seen of Wonder Woman in Belgium from 1918, and in it, she's standing next to her love interest, Steve Trevor. This is a direct reference to next year's Wonder Woman movie, which takes place mostly during World War I. Wonder Woman also makes a comment in the film that 100 years ago she left mankind, and whatever event caused that decision will most definitely feature in her solo film.

One of three heroes introduced via video files belonging to Lex Luthor, each of whom have their own movie coming out in the future as well as roles in 2017's The Justice League: Part One, Aquaman is seen (on video, watched by Wonder Woman) swimming in the wreckage of a ship and poking people with his trident. He also swims super fast, so there's that.

The second hero discovered in Luthor's files, Cyborg is seen as a torso for most of his time on screen while his father, Silas Stone, documents his efforts to rebuild his son. He eventually succeeds via the use of what appears to be a Mother Box; a piece of alien technology from Apokolips — more on that in a bit.

The Flash is the third hero discovered in the files, and he's seen stopping a robber at a convenience store via security cam footage. But that's actually the second of his two appearances. In his first appearance, he travels through time to warn Bruce Wayne about the future, telling Bruce he's "right about him". Bruce thinks he's talking about Superman, and uses the vision as justification for going after Supes.

Darkseid is almost definitely the villain for The Justice League , and he's referenced a few times. The Mother Box was created by a scientist from his home planet, Apokolips; Lex Luthor warns Batman at the end that someone is coming, and then, most notably, there's Batman's nightmare vision. In his vision, he's in a post-apocalyptic world full of Parademons, the minions of Darkseid. If that wasn't a strong enough clue, there's also a giant Omega symbol visible on the wasteland Batman looks out upon, and the Omega symbol is strongly associated with Darkseid.

Bruce Wayne makes a reference to the Joker when he first meets Clark Kent. Kent tries to defend Superman, but Wayne tells him that in Gotham they have a bad history with "freaks dressed like clowns". The Joker will appear in this August's Suicide Squad .

Batman keeps Robin's uniform on display in the Batcave, and it's scrawled with graffiti that says "Hahaha! Jokes on you, Batman!" This is definitely a reference to Joker having killed Robin, and it has solo Batman prequel written all over it (literally).

Yet another Batman villain who's alluded to in the film, the Riddler is referenced very briefly by way of his trademark question mark showing up as graffiti in Gotham (what is it with Batman's rogue's gallery and graffiti?). Director Zack Snyder considered including both the Riddler and the Joker in the film but decided not to, but you can bet that the Riddler will show up in a future Batman film.

In a way, Batman v Superman serves as one big commercial for The Justice League movie next year. The introduction of the other team members play almost like ads and are unrelated to the plot, and at the end of the film Bruce Wayne tells Wonder Woman that the two of them need to find the other "meta-humans" and come together as a team. Surprisingly, he doesn't wink at the camera while doing so.

These nine Easter eggs set up not only The Justice League: Part One, but also Wonder Woman, The Flash, Cyborg, Aquaman, Suicide Squad, and at least one, maybe two, Batman movies. That's a ton of set up for one movie, but Warner Bros. is clearly going all in with their DC cinematic universe. Now they just have to hope that the audience buys what they're selling.