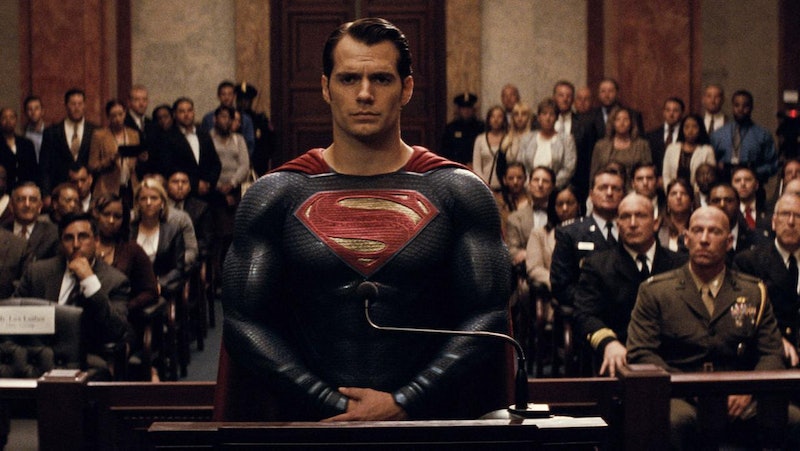 Chances are pretty good that you've already seen the latest big screen superhero smash-up, Batman V Superman: Dawn Of Justice . No, really — that's just a fact. The DC movie just had one of the largest opening weekends of all time, so I feel pretty confident saying that, if you're reading this, you have watched it for yourself (at least once) and already formed your own opinions on its merits and/or flaws. The reviewers certainly have; they pummeled the film like Bruce Wayne pummeling a kryptonite-weakened Clark Kent. But what did audiences — aka regular Joe and Jane Schmoes like you and me — think of the movie? What was Batman V Superman 's Cinemascore, and how does it stack up against its superhero brethren?

For those unfamiliar with Cinemascore and how it works differently than RottenTomatoes or Metacritic, it's a system that bypasses critical opinion entirely to gauge what the moviegoing audiences themselves think of any given film. A market research firm based in Las Vegas, Cinemascore has teams located in 25 cities across North America that poll audiences on the way out of the theater on Friday nights, asking viewers to grade the movie they just watched on a traditional "A" through "F" scale.

Typically, Cinemascores can be somewhat inflated, given that they're polling people on opening night when the superfans are likely to be out in droves and excitement is running high — it's very rare for any successful film to get an average grade below the "B" range. That being said, the results can still be very illuminating… and sometimes very surprising.

Here's how the biggest superhero movies — including DC films, the Marvel Cinematic Universe, and the Spider-Man and X-Men franchises — have fared over the years:

A+ — Marvel's The Avengers

Unsurprisingly, the first team-up movie featuring Iron Man, Captain America, Thor, Hulk, Black Widow, and Hawkeye has the highest Cinemascore of any superhero movie ever made. Well, technically it shares that honor with Pixar's The Incredibles, but that animated film is not based on a comic book unlike the rest of the films on the list.

The solid "A" range is host to a large number of quality superhero movies — including this February's breakout hit Deadpool. Also represented here are Ant-Man, Avengers: Age Of Ultron, Batman (1989), Captain America: The Winter Soldier, the entire Dark Knight trilogy, Guardians Of The Galaxy, all three Iron Man movies, X2, and X-Men: Days Of Future Past.

Now we're starting to see a little bit more of a mixed bag. While there are undoubtedly some quality films in this list (including the first two of Sam Raimi's Spider-Man movies, the first X-Men, and the first Captain America) there are also a fair number of more divisive films — such as Batman V Superman's immediate precursor, 2013's Man Of Steel. Also represented here are The Amazing Spider-Man, Batman Forever, The Incredible Hulk, Thor: The Dark World, The Wolverine, and X-Men: The Last Stand. (Fun fact: this is also the grade that last weekend's other new release, My Big Fat Greek Wedding 2, earned.)

Now that we've dipped below the "A" range, we've officially entered questionable-quality territory. There are still movies here that one could certainly make a case for — Superman Returns, Thor, X-Men: First Class — but they're existing right alongside undeniable clunkers like Spider-Man 3, X-Men Origins: Wolverine, and the franchise-torpedoing The Amazing Spider-Man 2 .

Eek! BvS is worse than Spider-Man 3?? That's what audiences had to say on opening night, giving the highly-anticipated clash of titans the same grade as such infamous turkeys as Catwoman, Daredevil (the Affleck one, not the Netflix one), Elektra, Fantastic Four (2005), Fantastic Four: The Rise Of The Silver Surfer, Ghost Rider, and Green Lantern. Yes, the one with Ryan Reynolds in an animated costume. The exception that proves the rule in this category is Tim Burton's Batman Returns, which has withstood the test of time much better than its "B" compatriots.

B- — Howard The Duck

Even if general audiences liked Zack Snyder's movie less than X-Men Origins, the cast and crew of BvS can at least take solace in the fact that their movie is better than Howard The Duck.

Nipples. On the bat suit. I think I've said enough. (Oh, and also Ghost Rider: Spirit Of Vengeance. That one got a "C+" too.)

The only one of the Christopher Reeve-era movies to be polled by Cinemascore also has one of the lowest grades on the list. I bet Superman wishes he could fly around the world fast enough to go back in time and erase this flop from existence.

Well isn't this a surprise? (No. It's not.) This summer's attempted "gritty" reboot of comics' least-gritty superheroes unsurprisingly bombed with both critics and audiences alike, earning Fan4stic literally the worst grade of any superhero movie ever made. Congratulations?

Once the excitement over seeing the Man in Tights and the Caped Crusader teaming up on the big screen for the first time has died down, will history remember the movie with more kindness than its "B" Cinemascore suggests? Or is Batman V Superman destined to be referred to in the same breath as Catwoman for the rest of eternity? Only time will tell.