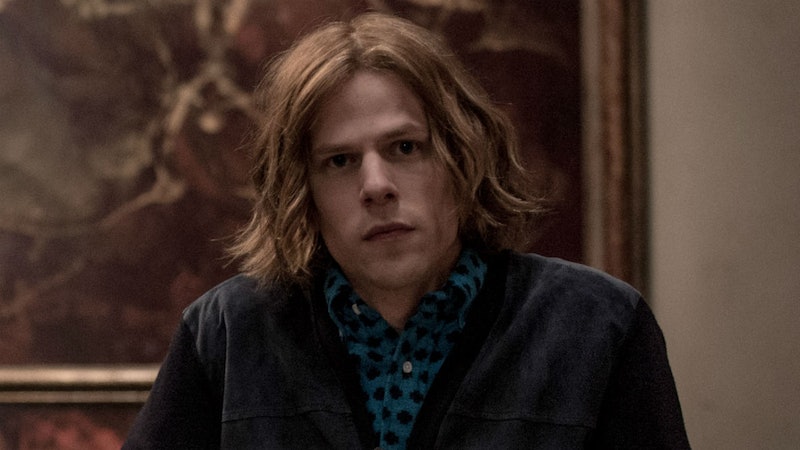 Whether your tastes align more with the critics who panned it or the audiences who loved it, you can't deny that Zack Snyder's Batman V Superman: Dawn Of Justice is an ambitious film. This movie is trying to do so many things at once: be a sequel to 2013's Man Of Steel, introduce Ben Affleck's new take on the Bat of Gotham, serve as a prequel to next year's Justice League Part One AND plant the seeds for several solo franchises including Wonder Woman, The Flash, Aquaman, and Cyborg. It also contains about five dream sequences, some of which are dreams within a dream, Inception-style. It's no surprise then, that even with a two-and-a-half hour running time, plenty of things ended up on the cutting room floor… like this deleted scene of Jesse Eisenberg's Lex Luthor cut from the end of the film.

(There will obviously be SPOILERS discussed in this article, so if you haven't seen the movie yet then what are you even doing here.)

In the version of the movie that hit theaters last weekend, Lex Luthor boarded the crashed Kryptonian ship to create Doomsday in the genesis chamber from a combination of General Zod's corpse and his own DNA. Then, the next time we see the film's villain, he's getting his head shaved in prison during a final montage and mumbling about how Superman's death has "rung a bell" that "someone" heard and is now "coming." Oh, and that someone is apparently very "hungry." Frankly, it was a lot of nonsense that made zero sense in the context of the film — at least for those viewers who aren't already neck-deep in DC comics mythology.

So how did Lex get in prison? What was he talking about in there? Who's coming and why are they hungry? It turns out, one little 44-second scene would have answered pretty much all of those questions. The scene was obviously cut from sometime immediately following the climactic battle, as Lex is still wading in the magical resurrection pool as a SWAT team infiltrates the ship and points their rifle-lasers at him, apprehending the tech genius for unleashing an unstoppable monster on the city. But when the soldiers arrive in the chamber, there's… something… else in the pool with Lex. Something positively demonic:

Yes, the inclusion of this scene would have raised yet another question — namely, What the heck is that?? But it also would have solved several lingering mysteries. We would've seen how Lex ended up in prison, and even if we didn't immediately recognize the horned being in the pool, we would've had a vague understanding of where Lex's crazed babbling was coming from: he'd had some sort of terrifying vision of a terrifying villain that future films will undoubtedly explain.

Fortunately, now that we've seen this deleted scene, we won't have to wait for future films to explain it. This demon is a DC baddie named Steppenwolf, a general from the planet Apokolips in the service of the fearsome tyrant Darkseid. (Think Marvel's Thanos, only with a face made out of stone.) Those cubes he's holding are Mother Boxes, like the one glimpsed in Cyborg's brief cameo, which are basically living supercomputers that grant their bearer mystical powers. (Think Marvel's Infinity Stones, only square.)

Just as the SWAT team invades the chamber, Steppenwolf seemingly dissolves into mist. So, what's that about? Can he teleport? Was it a ghost? A vision? A corporeal nightmare? Most likely, the alien antagonist wasn't actually on the ship; it was simply a manifestation conjured by the ship's computer to explain the impending conflict to Lex Luthor. The way the figure evaporates is similar to the way Jor-El's ghost explained General Zod's backstory to his son on the Kryptonian ship back in Man Of Steel. But even if Steppenwolf himself wasn't actually there, apparently the knowledge of his terrible existence alone was enough to drive Lex insane.

BvS audiences already got one other hint to Darkseid in the movie, even if they weren't aware of it. In one of Batfleck's (many) dream sequences, he envisions an apocalyptic future where a huge omega symbol is carved into the earth and insect-like soldiers swoop down from the sky. That omega is Darkseid's personal calling card and those winged beings are his soldiers, called parademons. So why keep that bizarre sequence of Darkseid references and cut out the short one at the end that actually helps clarify the conclusion of the whole movie?

Unclear; but avid fans will be able to see the scene put back in its rightful place — along with 30 more minutes of other cut footage — when the Batman V Superman Ultimate Cut hits shelves in July with all the deleted scenes reintegrated back into the movie itself. (Think the Extended Editions of the Lord Of The Rings films.) For now, you can watch the tantalizing scene for yourself right here: