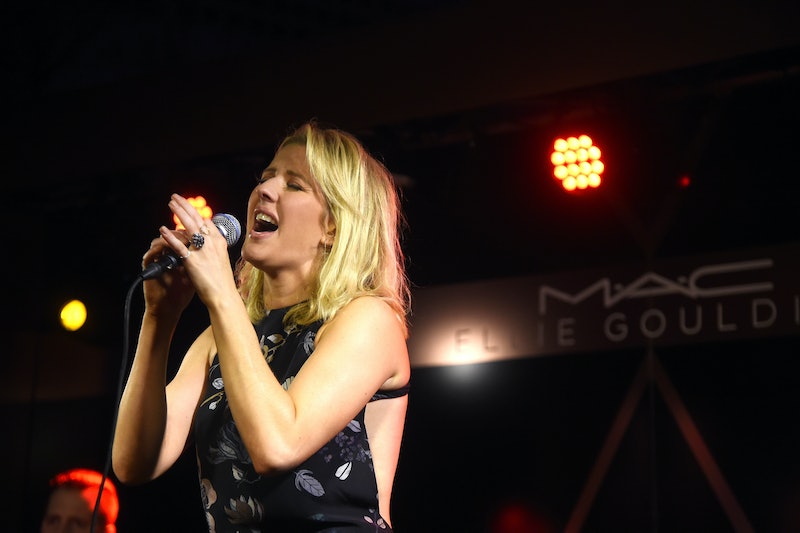 If you watched the episode of Girls, "The Panic In Central Park," you'll have heard Ellie Goulding's brand new song, "Here's To Us." The episode was emotional, and saw Marnie bump into ex Charlie, and reconsider her very recent marriage to Desi (the pair got married in the first episode of Season 5). Ellie Goulding's new song not only fitted the episode perfectly, it felt as though it was written about Marnie's journey, which finally gave the audience an insight into the character's inner world. As an often-hated character, actor Allison Williams did an amazing job bringing Marnie to life in an episode that followed her exclusively. So what are the lyrics of Ellie Goulding's "Here's To Us" about?

Having recently gone through a major heartbreak herself, an Ellie Goulding song is the perfect soundtrack to Girls . Goulding even told The Sun that she plans to take a break from music so that she can focus on herself, saying, “I’m not in a relationship anymore and that’s been hard. Having a break will be a good thing for me and my head.” This feels like the exact same place that Marnie is in on Girls, which is why "Here's To Us" fit the latest episode so perfectly. So what are Ellie Goulding's lyrics about?

You're falling at your feet, giving everything up There's something in the way, love is never enough I see your sorry hand burning down the gun With a war in your mind that never wants to be won

From the first verse, it's clear that "Here's To Us" is a song about breaking up. It's an impossible situation, and "love is never enough." Goulding's brutal, matter-of-fact lyrics, talk about how the other person is locked in an endless battle with themselves. Despite trying, it feels as though there's no longer a way forward.

I catch you in a light no one else can see I know you see her, and you'll never see me She makes you feel the most, keep your souls aligned But what we had, it never really died

The second verse, in particular, seems to speak to Marnie's love life in Girls Season 5. Everyone's had a moment in their lives when they've run into an ex, and felt, if only for a second, that what used to be between them is still there. Even though there are other people in the picture, that past relationship still looms large, and can be reignited in a second.

And this is what I'd say if I had any words Wish we hadn't messed up, now your heart is with hers And I know that your love wasn't here to stay I gave you all of mine but you gave it away

This is perhaps the most heartbreaking part of Ellie Goulding's "Here's To Us," because it is filled with regrets and could-have-beens. The speaker wishes they hadn't ruined their relationship, because now the other person has moved on. And, sometimes, even if we know a relationship isn't necessarily for the long term, it doesn't make it any less heartbreaking when it ends.

"Here's To Us" is about remembering something great, even though it's gone now.

While the song mainly seems to explore a relationship which is over now, there are glimmers of hope throughout it. When Goulding sings, "one day, you and I, we will never look back," it sounds as if the couple are back together at some point in the future. Conversely, this could mean that eventually they'll both move on and get over it. But like Marnie and Charlie just clicking back into place instantly, exes reunite all the time, and any time lost in between no longer matters.

The song ends with the refrain "But here's to us, here's to us, here's to us," and then it ends. The relationship is over, and the time for remembering is gone. But as Season 5, Episode 6 of Girls proved, none of us can predict what happens next, and this is what makes "Here's To Us" one of Ellie Goulding's best break-up anthems yet. Listen to the song now.

More like this
Billie Eilish’s UK Happier Than Ever Tour Will Include A Climate Takeover Event
By Rachel Mantock
Is Megan Fox Pregnant? MGK Gave A Shout-Out To Their “Unborn Child” Onstage
By Hugh McIntyre
Britney Spears Set A Wedding Date With Fiancé Sam Asghari & Previewed Her Dress
By Bustle Editors
The 1st Photo Of Priyanka & Nick's' Baby Comes After 100 Days In The Hospital
By Jake Viswanath and Hugh McIntyre
Get Even More From Bustle — Sign Up For The Newsletter