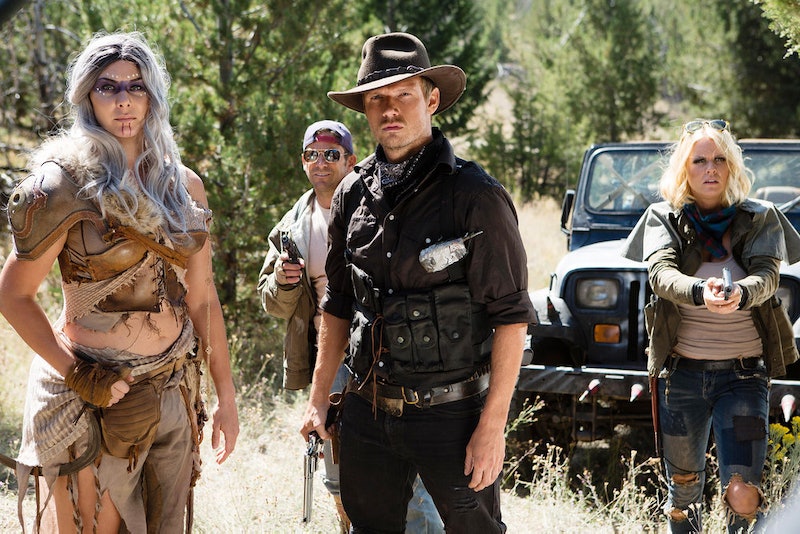 If you're not excited about the boy band zombie western movie mash-up Dead 7 just yet then perhaps there's more on the way that will get you pumped. With members from '90s and millennial boy bands like The Backstreet Boys, *NSYNC, O-Town, and 98 Degrees all coming together for what may be the next big cult SyFy channel movie, boy band fangirls are not only getting the likes of Nick Carter and Joey Fatone kicking some major zombie butt, but they also got the latest collaboration track from all four '90s boy bands, "In The End," that was released on Monday. However, it seems as if my '90s heart still wants more. I know I can't be the only fan wondering if there will be a '90s-style "In The End" music video.

While a full-length SyFy channel movie premiering on April 1 is nice, it also opens the door to tons of possibilities of what boy band mash-ups can accomplish. And, with the sick dance moves and cheesy ballads of the late-'90s and early-'00s, I'm seriously keeping my fingers crossed for a music video for the movie's theme song, "In The End." Incredible music videos like *NSYNC's "Bye Bye Bye" and 98 Degrees' "I Do (Cherish You)" defined my childhood, so the possibilities for the zombie-western themed "In The End" music video are literally endless. I really hope that Nick Carter is working on pulling that together as well. because, seriously, this song has all of the makings of '90s music video comeback.

But, if there is a music video for the song on its way, what would it include? It would have to have some deep, teary-eyed gazes into the camera, some subtle dance moves (since the song isn't very fast in and of itself), and some slow motion walking with cowboy boots. However, no word about a separate music video for the song has been confirmed as of yet. Instead, the first two minutes of Dead 7 have been exclusively released via Rolling Stone, and, in the film's introduction, fans get a taste of the song itself as it's meshed with the plot and character breakdowns of the overall film. Basically, the first two minutes of the film kind of serves as the mini music video for the song "In The End."

However, I'm still holding on to the hope that a separate full song music video could be on it's way. With so many artists coming together as one, there's still a chance that a full-length soundtrack for the film Dead 7 is a possibility. If the film is everything fans want it to be, we can expect a whole lot more The Backstreet Boys, *NSYNC, 98 Degrees, and O-Town compilations, right? The SyFy channel featured zombie-western battle will decide the fate of the '90s-themed music video dream, so every fan of these bands needs to make sure to tune in.

More like this
Harry Styles Performed A Snippet Of Taylor Swift’s “22” & The Crowd Went Wild
By Jake Viswanath
10 Eurovision Moments That Celebrate The Weird & Wonderful Camp Extravaganza
By Sam Ramsden
Shocked Fans & Former Co-Stars React To Ray Liotta’s Death At 67
By Grace Wehniainen
'Stranger Things' Star Joe Keery Is Dating An "Indie Scream Queen"
By S. Atkinson and Grace Wehniainen
Get Even More From Bustle — Sign Up For The Newsletter