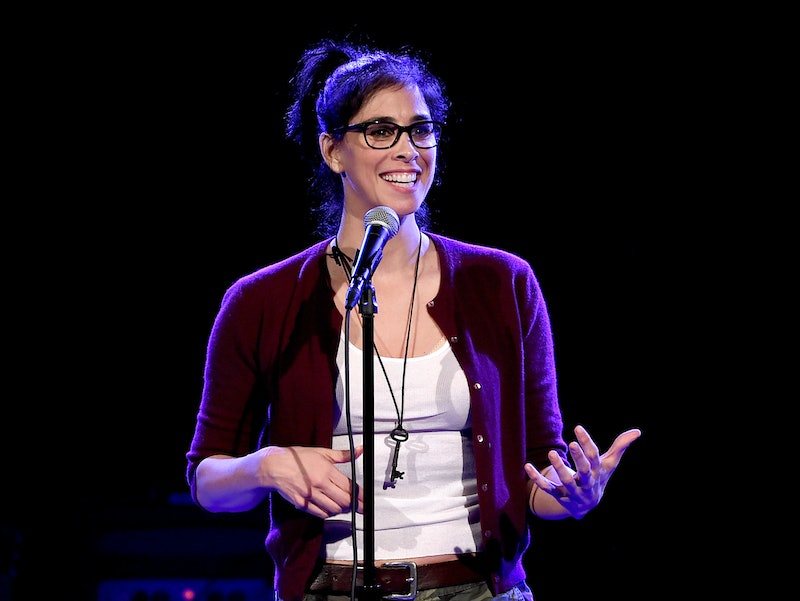 As the old adage goes, you catch more bees with honey than with vinegar. In the same vein, Bernie Sanders supporter Sarah Silverman may sway more voters with self-deprecating jokes about her bush than by shredding apart Democratic presidential frontrunner Hillary Clinton. On Monday, the comedian and actress shared a video on Facebook called (ever so subtly) "BERNIE SANDERS IS THE ONE FOR ME: Sarah Silverman Explains." It's hardly the first time Silverman has shared with the masses why she is feeling the Bern, but her latest shout-out for the Vermont senator shows why she is such a valuable ally, as far as celebrities go.

Throughout the video, Silverman makes it clear that she's not anti-Clinton. She makes a crack about how she's not here to tell you to vote (though that's clearly half the point of this video). "If you vote or not, that’s not my business. I’m not your mommy,” Silverman says. “Though like your mommy, I have a completely full bush.”

As she has said before, Silverman admits she was happily in the Clinton camp before Sanders came along as a presidential prospect. "Hillary had always been my choice. I'm a feminist. Democratic woman president? Yes, please," Silverman says point blank. While she proceeds to praise the Vermont senator, she generally avoids taking too many jabs at Clinton. In fact, although Silverman highlights how Sanders won't take big corporate donations as one of his strengths — and as she puts it, his presidential campaign is "a giant 'Fuck You' to the above-law billionaire class" — she doesn't really blame Clinton for taking those funds. In fact, Silverman says that she "accepted" that part of Clinton's campaign "because I saw it as a necessary evil."

"I'm not against Hillary," Silverman explains. "I just ... I met someone I have more in common with. And his name is Bernie Sanders."

Silverman's endorsement of Sanders is so effective because she refuses to go too negative, focusing on knocking down the arguments against Sanders rather than raising any against Clinton. While Silverman calls out Senate Majority Leader Mitch McConnell for refusing to raise the minimum wage but voting to give himself and his Senate colleagues a salary increase, her punches at Clinton are much more subtle. She doesn't argue that Clinton is bad, but rather that Sanders is just better.

That line of argument is what makes Silverman's endorsement so convincing to Democratic voters who may be on the fence — or hell, even if they're proudly tweeting #ImWithHer. It's easier to denounce the typical political mudslinging than it is to ignore a nuanced argument — at least for the kind of voters who enjoy watching snarky celebrity video endorsement (aka almost entirely Millennials).

Silverman stands in stark contrast to another celebrity Sanders supporter who apparently would rather see Donald Trump as president than let Clinton enter the White House on January 20, 2017. Oscar winner Susan Sarandon confused pretty much everyone with her logic that if Sanders didn't win the Democratic nomination, it might be better for Trump to beat Clinton in the national election. On Monday night, Sarandon told MSNBC's Chris Hayes that, "Some people feel that Donald Trump will bring the revolution immediately if he gets in" and that would be better than letting the country "continue the way we are."

I'm not going to bother parsing through why that logic doesn't hold (after all, Bustle's Karen Yuan does that here). However, more than the fact that Sarandon comes across as out of touch and contradicting her own professed goals and views, her Bernie-or-nothing approach makes the Sanders campaign seem bad — specifically, they seem like a bunch of incapable-of-compromise, their-way-or-the-highway political loons who could never actually get anything concrete in government done. Ironically, that's pretty much exactly how Clinton supporters want Sanders to be viewed by Democratic voters. Sarandon's firebrand cause célèbre approach to Sanders' presidential run only hurts him.

But Silverman takes a far more moderate approach — and thus it's far more convincing, especially in regards to what may be Sander's biggest Achilles heel with Democrats: his (perceived) unelectability. Silverman said that not voting for Sanders because one thinks he won't get elected is "what my shrink would call a self-fulfilling prophecy." Funny, sharp, and logically sound — it's why Silverman may be the rare, actually useful celebrity endorsement.