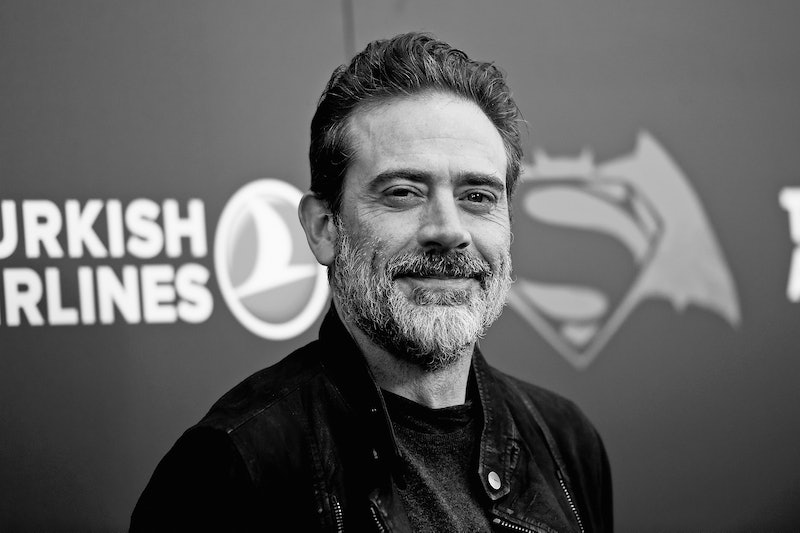 Jeffrey Dean Morgan is an incredibly busy man, and one of my favorite people of all time. He first stole my heart when he played Denny Duquette in Grey's Anatomy, and, since then, he's been appearing in just about everything. Most recently, he featured in Batman Vs Superman: Dawn Of Justice, and I'm still obsessed with the fact that in real life he often appears on the red carpet alongside partner Hilarie Burton (Peyton from One Tree Hill!). As if this man couldn't get any more impressive, it looks like he's about to outdo himself with his new role. In a photo shared on Twitter on Tuesday, we finally got our first look at The Walking Dead's Negan, and it gives us a clue about the character Jeffrey Dean Morgan will play.

Posted on Twitter by TVLine's Michael Ausiello, the photo features only the back of Jeffrey Dean Morgan, but we can see that he's carrying a baseball bat, and wearing a leather jacket. Ausiello's tweet says, "#TheWalkingDead unveils first official pic of Negan and Lucille," and it's certainly enough of a hint to get excited about. Since it was announced that Jeffrey Dean Morgan would be joining The Walking Dead, fans have been desperate to see how he would portray one of the most legendary characters in the original comics.

Anyone still unsure about who Lucille is, Wetpaint says, "Negan carries around a baseball bat covered in barbed wire. Her name is Lucille." The site also explains Negan's role on The Walking Dead, saying that "Negan and The Saviors rule by fear, they demand supplies and rations in exchange for killing walkers outside of Hilltop. Rick and members of all three communities eventually team up to fight The Saviors in what's called 'All Out War.'" A major battle is on the way, then. Jeffrey Dean Morgan will make a convincing gang leader, and I'm actually excited to see him in a more violent, bad guy role, following his stint on The Good Wife.

The wait for Negan's big reveal on The Walking Dead is almost over, and even this small glimpse of what Jeffrey Dean Morgan will look like on the show is enough to get me pumped for his first episode.