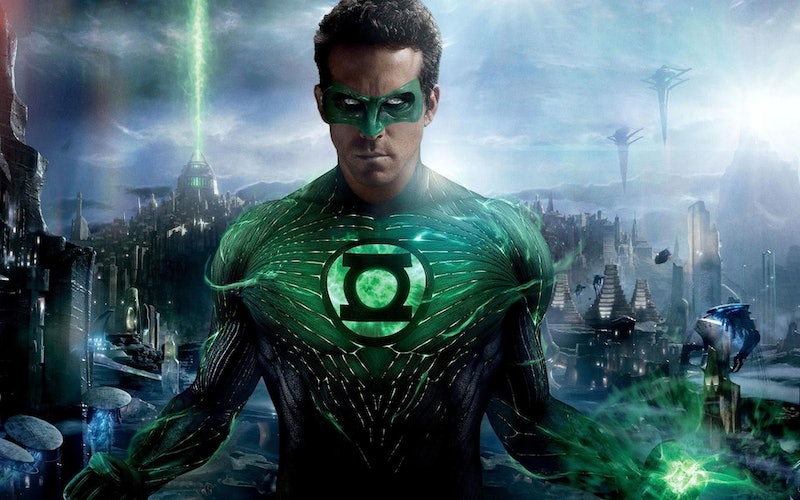 For months, there have been all sorts of rumors about expected cameos in Batman v. Superman , and now that the film is in theaters some of the rumors have been confirmed while others have been disproved. Real-life media figures such as Soledad O'Brien, Neil DeGrasse Tyson, and Anderson Cooper make appearances as themselves, and many DC Comics characters are also featured. Among these characters are members of the Justice League; Wonder Woman, the Flash, Aquaman, and Cyborg. But there's one Justice League-er whose appearance was rumored for the film but who doesn't have so much as a half-second cameo: the Green Lantern. So, why isn't the Green Lantern in Batman v. Superman?

It may seem like there are a ton of possible explanations for the superhero's absence. For example, maybe the studio wanted to get Ryan Reynolds to reprise his role but he wasn't available, or maybe filmmakers wanted to get a new Green Lantern but didn't cast someone in time for filming. Or perhaps the studio decided that the movie was already inundated with cameos, and that adding the Green Lantern into the mix would be excessive. While there may be some truth in any or all of these answers, a Warner Brothers executive recently revealed a different explanation.

Greg Silverman, President of Creative Development and Worldwide Production, told Entertainment Weekly that the character's absence in BvS was a deliberate decision on the part of the studio. He also revealed that the Green Lantern won't make another onscreen appearance until Warner Bros is certain it can do the character justice. Silverman explained:

So there you have it; that's why there's no Green Lantern in BvS. Silverman also revealed that, since so many other characters are already going to be present in larger roles in the upcoming Justice League - Part 1, Green Lantern won't get a chance for an introduction in that film, either. The Green Lantern may make an appearance in Justice League - Part 2, although Silverman mentioned to EW that "every beat of the movie is not yet worked out" so it's unclear if the superhero will be introduced there or if he'll have to wait until a subsequent DC film.

Despite all the uncertainty about the timing of the Green Lantern's re-introduction to the DC Comics cinematic universe, fans can take solace in knowing that he will eventually make an appearance. There is a Green Lantern reboot in the works — currently scheduled for a June 19, 2020 release — but ideally the character will get some screen time before then. So keep an eye out for updates, and in the meantime, enjoy getting reacquainted with the other members of the Justice League in BvS.