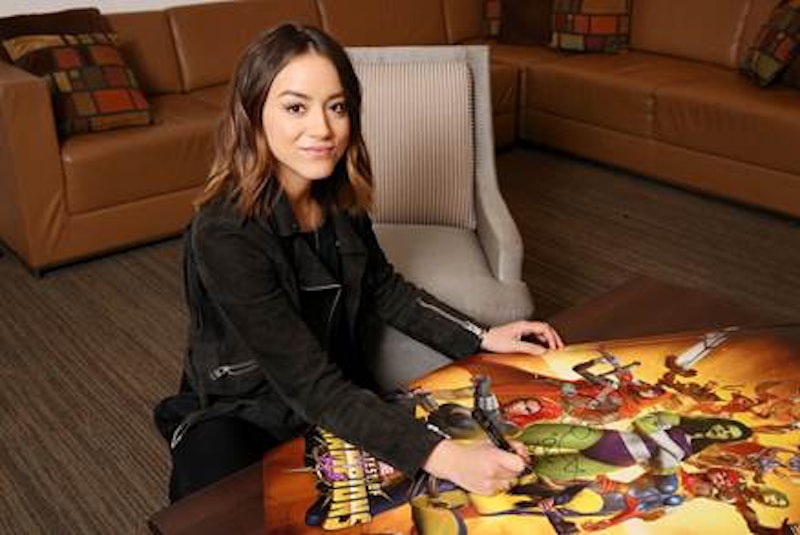 The phrases "damsel in distress" and "strong female character" has been tossed around so many times that I don't think anybody knows what it means anymore, to be honest. Let's change the conversation. In honor of Marvel's Women of Power celebration, I asked Chloe Bennet about the importance of female heroes on Agents of S.H.I.E.L.D. and everywhere, really. Whether it's knocking down stereotypes or finally seeing someone on television that looks like you, these changes are possible and they're happening.

A lot of times, some directors will come up and say 'OK, well we wanted to make this more bad*ss — so be a little bit more like this,'... and what they're describing is that they want me to be more masculine. And I think femininity is so bad*ss in a natural, organic way.

Amen to that! There are so many different women on Agents of S.H.I.E.L.D. that excel in different ways and display femininity in different ways, and that's what makes it so great. "On our show we have Simmons," she says, "who's incredibly bad*ss, but not because she has more male-like qualities." Simmons is a scientist, and while she can hold her own on the field, her other skills and vulnerabilities are far more impressive. That vulnerability in overcoming obstacles is something that Daisy and Simmons share as characters.

Simmons and Daisy's relationship is important for the representation of women on television, as well. "The first thing Joss [Whedon] said to be and Elizabeth [Henstridge] when we first got cast is that these characters will never get into 'pitting' arguments. These are smart, intelligent women, and they will always respect each other for what they do." That will come into play this season. "Simmons has a very strong opinion about powered people, people with abilities, and I think obviously Daisy does too and they can respectfully and with strength disagree and still be really really great friends, and that's something you don't see very often with women characters on TV."

Overall, it's just important to see yourself onscreen — that's why we strive for diversity and representation of all kinds. A character that finally resonated with Bennet and made her say "that's me," of all things, is Sandra Bullock's character in Miss Congeniality. "She's kind of this mess, she didn't care about the way she looks. It didn't matter to her. It wasn't about being beautiful." Before you ask — she knows that Skye looked "like a Loreal commercial" on Agents of S.H.I.E.L.D. in Season 1 and has advocated for a more realistic look ever since.

I think another great thing, especially for young fans, is that the characters are beloved regardless of gender. Right now Star Wars is a good example — years ago young girls may have grown up wanting to be Luke Skywalker, and now there are boys who look up to Rey. We are beginning to see this with Marvel as well.

"People are blindly identifying with [Daisy] not because she's female but because of who she is as a person," Bennet says. "I think that's what it's all about. It's really about who she is and how she reacts to things and what she thinks is funny and how she's overcome dealing with her parents and changing. She went through what I like to call "superhero puberty," turning into a superhero. Anyone can relate to that, whether you're a male or a female."