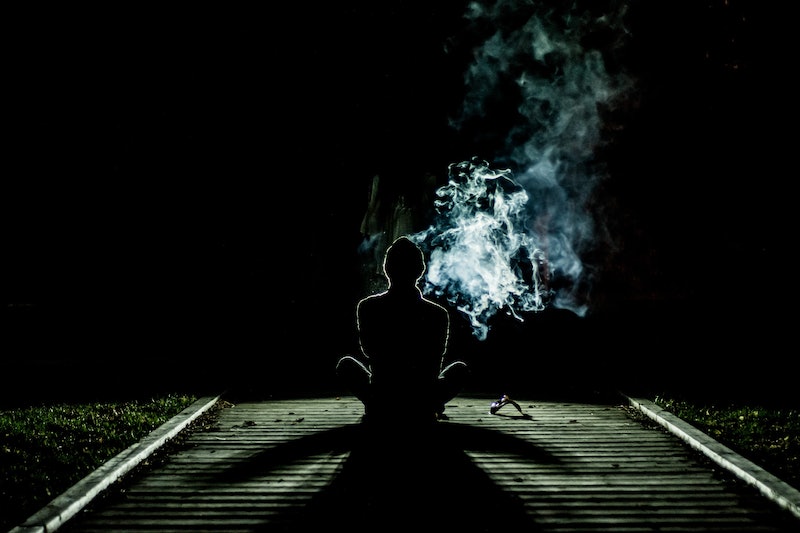 This may not come as a surprise to you, but I love creepypastas. What are creepypastas? They're bite sized stories shared on various forums for the sole purpose of scaring you. These stories could be psychological in nature, feature terrifying creatures, or center upon mysterious events that defy explanation. There are literally hundreds of these stories — all gathered on one handy website. These horror shorts range from novella length to a single paragraph. In other words, creepypastas are basically scary literary popcorn.

You've probably heard a few of the more popular stories: Jeff the Killer, The Rake, that paragraph where you are secretly in a coma and you need to wake up because this all a dream please wake up, and your loved ones are trying to get through to you this is our last hope please wake up we miss you. You know. Good old fashioned fun. One of the best things about creepypastas is how extraordinarily well written they are. These authors should all be writing bestsellers, but instead they pour their energy into writing delightfully horrifying nuggets of horror. I say, why not do both? Dathan Auerbach did just that when he turned his creepypasta, Penpal , into a horror novel in 2012.

I’ve compiled a list of seven creepypasta stories that I believe should be turned into novels. If any of you authors are reading this (even you, unknown author), you should totally write a book! As for the rest of you, good luck sleeping after reading this article.

1. "The Smiling Man" by blue_tidal

This terrifying tale begins in the dead of night in a city very much like your own. Our narrator is walking by a park a far distance from their apartment when they meet a strange smiling man gracefully advancing down the street with odd dance steps. As the encounter continues, the ghoulish man continues to interact with (while not seeming to acknowledge) the narrator, heightening the charged atmosphere. There's a lot that can be done to expand this into a spectacularly creepy story. Perhaps the smiling man is the victim of a supernatural curse or a strange virus. Maybe he's a ghost or under the thrall of a supernatural creature. Wouldn't it be terrifying if, the next morning, the narrator wakes up to discover that several people have been found murdered... all with the same ghastly smiles on their faces?

Framed as a series of nostalgic posts centered around the fictional show Candle Cove, this creepypasta begins innocently enough, but ends up creepier than the best of them. With each post, the author builds a sense that something is not quite right with this fictional show, which features Pirate Percy (a puppet made out of pieces of broken dolls), Horace Horrible (literally just a mustache with teeth) and the true villain of the show, the Skin-Taker. You soon learn that there's more to this show than meets the eye. I can imagine this story being transformed into unconventionally formatted novel told entirely through forum postings, e-mails, and instant messaging as a group of intrepid internet users attempt to unravel the mystery of Candle Cove.

3. "My Dead Girlfriend Keeps Messaging Me On Facebook" by natesw

Equal parts terrifying and heartbreaking, this creepypasta centers around a man named Nathan and his girlfriend, Emily. After dying in a car accident 13 months previously, Emily sends Nathan a message on Facebook, recycling old messages that she had sent him previously and tagging herself in photos. When Nathan attempts to contact her back, more and more terrifying things are revealed. There's a lot of ways this could be turned into a novel. This haunting tragedy is definitely the kind of story that will stay with you.

4. "The Russian Sleep Experiment" by unknown

"The Russian Sleep Experiment" is terrifying for so many reasons. The story centers on a group of five political prisoners who are subject to a mysterious gas that keeps them from falling asleep. The results of this experiment are nothing short of terrifying. It's like the greatest hits of horror, featuring horrible medical experiments, self mutilation, crushing madness, and the unsettling knowledge that something out there is more horrifying than our current reality.

Imagine a world made up entirely of dogs. No, I mean the ground, the earth, rivers, all plants. All of them dogs. At first it seems like a totally lovely idea... but it's actually completely terrifying. "Dogscape" is practically the outline of a rather demented fantasy novel on its own, and the writing is pretty terrific already.

This story probably could have the most faithful adaptation, because it has everything: teenagers in the woods, love subplots, and creepy supernatural creatures. This tale centers on our narrator as he goes camping with some friends in the woods. Soon a strange smell (like blood mixed with electrical parts) becomes apparent, and the group of campers begin to realize that they might not be alone in the woods.

7. "The Slender Man" by the Eric Knudsen

Several people went into the creation of the original Slender Man, and he's totally taken off since then, even appearing in Supernatural and Lost Girl. Rumor has it, he'll be a focus for season six of American Horror Story. Of course Slendy's fame has a dark side, given the fact that he was allegedly the inspiration for the horrific stabbing of a 12-year-old girl. This gentleman is creepy solely because he can be whatever you want him to be. He's technically not in the public domain, but his creator seems relatively open to media involving Slender Man in their projects — so long as it's weird, creepy, and totally original. Get on it, kids!