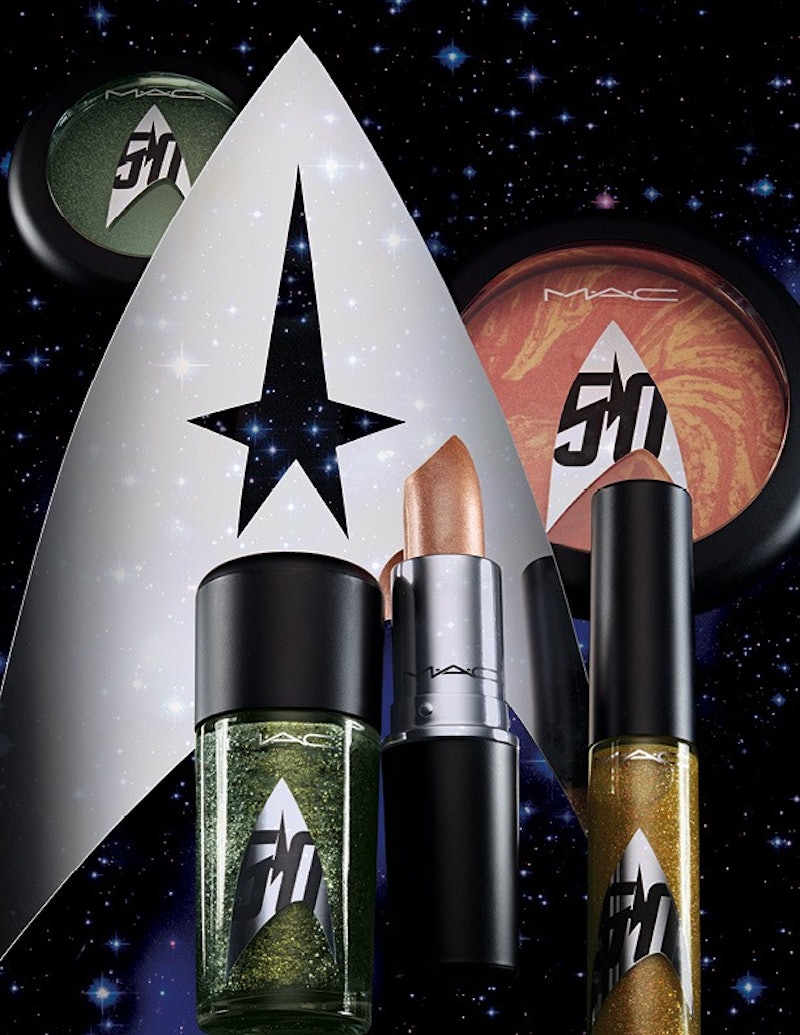 And I thought the COVERGIRL x Star Wars makeup collabo was out of this world. The MAC x Star Trek makeup collection is coming in September and will boast 25 products that makeup mavens and Trekkies will be vying to own. The announcement of the partnership nearly broke the Internet, as the Twitterverse responded fervently. Obviously, anticipation for this range is seriously high. We already know that MAC x Star Trek will help to close out summer and usher in the autumn season since it arrives at physical retailers on Sept. 1, with a pre-sale set for July and an online bow of Aug. 25, and that it's massive in size. But where will you be able to get it?

Well, it's pretty much a foregone conclusion that you will be able to shop MAC x Star Trek at MAC boutiques, on the MAC site, and at the brand's counters in department stores. It's hardly an "indie" pairing for a niche market or small subset of shoppers where it would make total sense to be sold online only!

Details will assert themselves as the launch date draws nearer. Right now, fans are excited about this unexpected but totally awesome mashup. MAC collabos are always to die for and involve other aspects and elements of pop culture.

According to The Hollywood Reporter, the collection will hit stores on Sept. 1 but will be available online on Aug. 25. Prior to those dates, the set will debut at San Diego Comic-Con via an exclusive, one-day pre-sale on July 21 at the MAC store in the Gaslamp region. So if you have Comic-Con plans...

Nevertheless, there is just no way this collection, which helps to celebrate Star Trek's 50th anniversary, won't be perfect.

Total awesomeness is coming our way in July, August, and September. Stay tuned for more information and details.

More like this
M.A.C. Is Launching An ’80s-Chic Stranger Things Makeup Collection
By Olivia Rose Ferreiro
5 Easy (& Wearable) Red Eyeliner Looks To Try
By Olivia Rose Ferreiro
21 AAPI-Owned Beauty Brands That Will Be Your New Favorites
By Audrey Noble
Half Magic Beauty Is Here With The Euphoria Makeup Of Your Dreams
By Rachel Lapidos
Get Even More From Bustle — Sign Up For The Newsletter