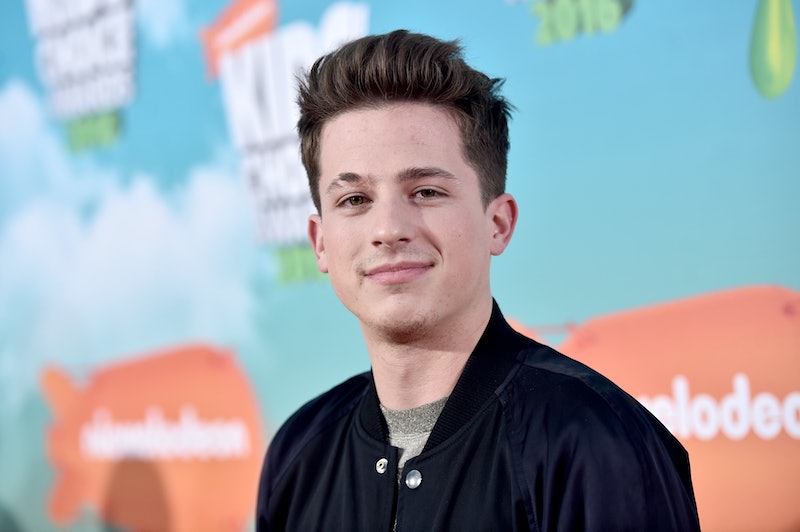 Sorry, Jelena fans: Justin Bieber and Selena Gomez may not be as ~back together~ as initially interpreted after he posted that throwback photo of them kissing (and she reportedly liked it). Because according to Us Weekly, Gomez is reportedly hooking up with Charlie Puth — which, truth be told, would be a pretty good explanation as to why Puth randomly yelled, "F*ck Justin Bieber!" during a performance of his Gomez duet "We Don't Talk Anymore" at a recent show. (He later reportedly apologized in a series of cringe-worthy tweets that were quickly deleted, according to Us.)

An Us Weekly's insider said the two are enjoying each other's company — sorry for the Bieber reference — but things aren't relationship-level just yet.

"It’s not serious, but she’s super into him," the source revealed, although another insider claimed that they're just having "flirty fun."

Gomez may be "super into" Puth, but it's clear from the way the "One Call Away" singer gushes about his fellow collaborator that Puth thinks very highly of her, as well.

"I don't know if anyone really understands me," he told the magazine back in November. "That's why I hang with Selena Gomez. She gets me."

And it's also a plausible explanation for his random, expletive-filled JB outburst a few weeks ago, during which he peppered his Selena Gomez duet "We Don't Talk Anymore" with a healthy dose of "eff you" — much to the audience's delight:

Of course, there are multiple ways to interpret this. Publicity, for one — "Charlie Puth" was a trending topic after videos quickly zipped around Twitter. Or maybe Puth was taking Gomez's side in the never-ending saga that is Jelena. Or maybe he was just joking, like he later reportedly claimed via Twitter in now-deleted tweets:

"Hey everyone. I feel the need to clear something up. What I said at the concert last night about Justin was meant to be a joke," he wrote the next day according to Us Weekly. "The way it was said mid-song did not sound like one. However... I am a massive @justinbieber fan and I have nothing but great things to say about him and his music always."

Still, if it was a joke, it sounds a little bit like one of those "lol, totally kidding but there actually is some truth here" moments. And if Gomez and Puth are indeed hooking up, it's not hard to see how jealousy could be a factor and prompt an impromptu "eff you, ex-boyfriend of my new lady" shoutout during a show. Still, the whole Jelena thing is definitely something for Puth to get used to, since the Biebs is known for posting Jelena throwbacks on Instagram and the two still support each other (Gomez was just spotted at JB's L.A. Purpose tour show last week) — whether Puth likes it or not.

As for the outcome of a Selena Gomez/Charlie Puth hookup situation — Will it turn into a relationship? Will she go back to Bieber? Will she continue recording absolute jams like "Sober" that are way better than rumors about her dating life? — it looks like only time will tell.

More like this
Selena Gomez Reacts To TikTok Users Who Say She Shaded Hailey Bieber
By Grace Wehniainen
Selena Gomez Joked About Her Relationship Status In Her ‘SNL’ Monologue
By Grace Wehniainen
Camila Cabello Shared Advice For Anxiety & Mental Health With Selena Gomez
By Alyssa Lapid
Is Megan Fox Pregnant? MGK Gave A Shout-Out To Their “Unborn Child” Onstage
By Hugh McIntyre
Get Even More From Bustle — Sign Up For The Newsletter