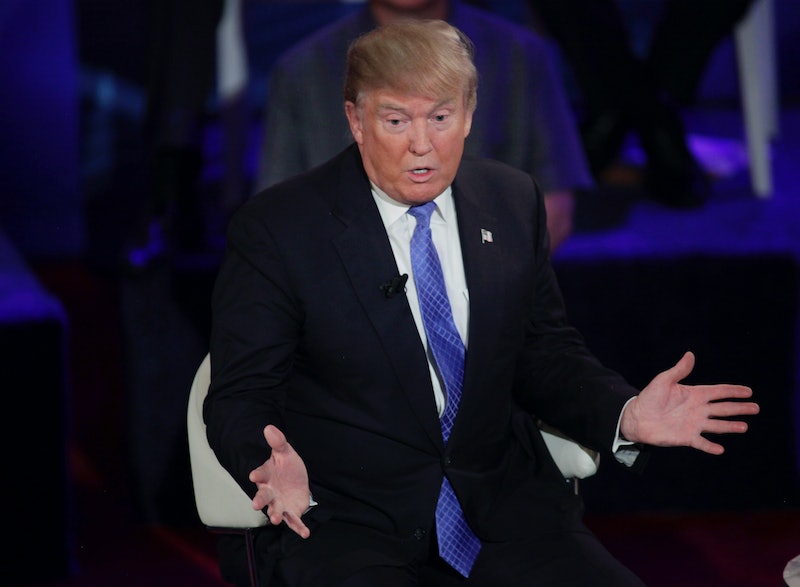 Donald Trump finally followed through on a threat this week. At a Republican town hall in Milwaukee, Wisconsin on Tuesday night, Trump took back his loyalty pledge to the Republican nominee, plainly stating that he will no longer promise his unconditional support of the eventual nominee if it isn't him. Trump has intimated for quite some time that if he does not win the nomination, he'd renege on his pledge, but this was the first time that he denied the pledge outright. While this move might not ultimately matter, it could be a huge factor in the general election.

What Trump's rescission effectively does is fracture the Republican Party for the general election. There are some pretty compelling theories attempting to explain this reticence to support the eventual nominee, but even if Trump has an ulterior motive, it doesn't matter. If Trump loses the nomination and moves forward as a third-party candidate, his loyal following will make a huge cut in the Republican base. But without the establishment behind him, it more than likely wouldn't be enough to win the election. The inevitable vicious battle between Trump and a hypothetical GOP nominee would leave a clear and high road to the White House for the Democratic nominee, all but ensuring that the Democrats remain in power for at least the next four years.

Of course, that's not necessarily a slam dunk for anti-Trumpers, because the likelihood that he will be the nominee is growing quickly. Trump is already leading the race by nearly 300 delegates, and he's likely to win several more upcoming primaries, including New York, California, and Pennsylvania, critically important swing states in the general election that each have a hefty number of convention delegates. Even if there is a huge turning tide against Trump in the next few weeks, his 736 delegates are mostly bound to him right now, meaning they have no choice but to vote for him in the first round of the Republican National Convention. At that point, it would be extremely difficult for Kasich or Cruz to garner the necessary delegates to take the nomination automatically, which might lead to a brokered convention in which Trump still might win.

There's also the possibility that Trump chooses not to run as a third-party candidate if he doesn't win the nomination, and instead simply doesn't support the actual nominee. He's indicated in the past that he would consider a third-party run, but has never promised such, and he didn't state specifically that he would do so at the town hall, either. If the viral letter from the former campaign strategist of the Make America Great Again Super PAC is accurate, it will be a relief to Trump that he can end his candidacy and get back to business.