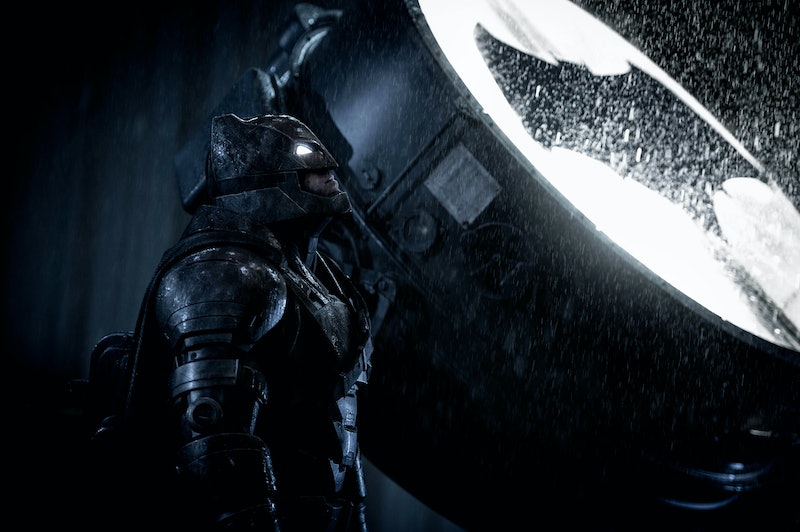 The first of two planned Justice League films is still about a year and a half away, but Batman v Superman may have given away its villain. Warner Bros. Pictures released a deleted scene from Batman v Superman just a few days after the film premiered, and it seems to hint at the impending arrival of an infamous DC comics baddie. As far as the comic-reading part of the internet is concerned, this scene (along with the Easter Eggs in the actual theater cut) sets up Darkseid as the Justice League 's nemesis. But just who is Darkseid and what does he want? The cinematic DC universe will no doubt put its own spin on the villain, but there's plenty of Darkseid history in the comics to get them started.

Let's pull back to that deleted scene for a minute. It's only 44 seconds long, but it reveals quite a bit. It looks like Lex Luthor is about to be taken into custody; when he's found, he's face-to-ugly-face with a demonic-looking creature who's suspending three boxes in the air. Those boxes show up in the finished film as well. Director Zack Snyder confirmed for Entertainment Weekly that the cubes are "Mother Boxes," aka all-powerful alien technology. io9 points out that the beast controlling them in this deleted scene looks like the DC character Steppenwolf, a lieutenant of Darkseid. The site also shouts out a commenter on YouTube who posits another theory: the monster is Yuga Khan, Darkseid's father. There's no confirmation to be found in the clip, since no dialogue is exchanged. Whoever that creature is, the connection still stands. Darkseid is coming, and the Justice League had better buckle up.

DC geeks have plenty of reasons to be excited about this possible showdown. Darkseid is a terrifyingly powerful villain and more than an equal match for the gang of do-gooders who will surely be trying to stop him from taking over and/or destroying the world. The official DC site describes Darkseid as a bad guy who "stands above" the rest, and is in the market to conquer "all of existence." He sounds sort of like DC's version of X-Men's Apocalypse, who gets the subtitle honor in that upcoming film, as well as Thanos from Guardians Of The Galaxy. So, no pressure, Justice League.

Darkseid made his first appearance on the page in 1970. He hails from the planet Apokolips where he pretty much runs things. His minions are Parademons, seen in Batman v Superman as the genetically engineered troops who haunt Bruce Wayne's subconscious. Super-smart and super-strong, Darkseid would much rather "manipulate and control others to reach his goals" instead of breaking a sweat himself, according to DC. (That little character trait reminds me of another comic book villain with a penchant for control: Jessica Jones' Kilgrave.) Beyond comics, Darkseid has popped up in animated DC series and films, video games, and even on the teen Superman sci-fi drama series Smallville. My favorite fact about the villain is that he was once voiced by Brooklyn Nine-Nine's Andre Braugher, in the animated movie Superman/Batman: Apocalypse. Captain Holt, how could you?!

Anyway, director Zack Snyder has been coy about what shape Darkseid might take in the Justice League films, but the hints sprinkled throughout Batman v Superman make his eventual arrival a very safe bet.