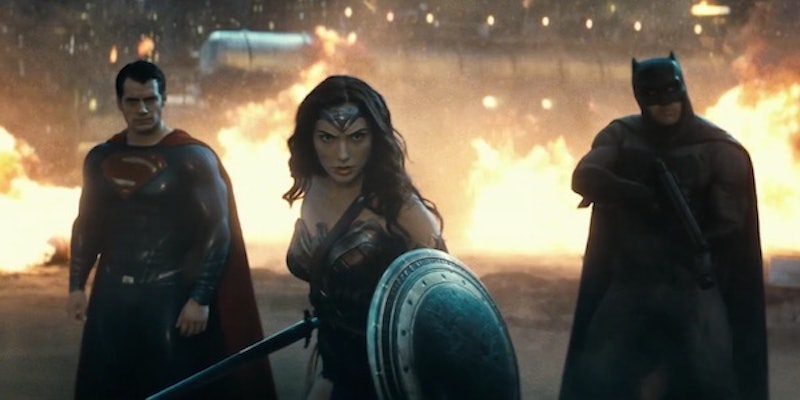 DC is certainly going to have to do a lot of things right if it wants to compete with Marvel. All signs point to Batman v Superman doing very well at the box office, but that's not to say it will outgross either one of the Avengers movies, which currently rank as the fifth and seventh highest-grossing films of all time, bringing in nearly $3 billion worldwide combined. But that's OK, because Batman v Superman is not the Warner Bros. equivalent to The Avengers — that would be Justice League. And as long as Warner Bros. plays their cards right, Justice League could be on par with The Avengers. Here's what the studio needs to include in the film to make that happen.

One thing that made The Avengers so great was Tom Hiddleston's Loki. He was charismatic, threatening, and a great foil for the team. The Justice League needs to do better than Doomsday, that's for sure, and it looks like Batman v Superman is setting up Darkseid to be the big baddie for the film. He's certainly imposing enough, but they really need to find an actor who'll make the character fascinating and magnetic, and not just a power-mad alien.

The Avengers, and every other film in the Marvel Cinematic Universe, is legitimately funny. Their humor and clever writing are a big part of what makes them four quadrant movies. Batman v Superman, and Man of Steel before it, are largely somber in tone and the jokes are few and far between. To bring in the families, which is what DC needs for The Justice League, they've got to up the funny.

The Avengers had Pepper Potts, Erik Selvig, and Agent Coulson, but beyond that, there weren't a lot of secondary characters. Jane Foster wasn't around. Neither were James Rhodes, or Happy Hogan, or Odin... you get the point. The Justice League should definitely have some secondary characters to fill out the world, like Lois Lane and Alfred Pennyworth, but with too many it becomes too big of a movie to maintain. The focus should be on the heroes.

This may seem like an odd suggestion, but if you watch The Avengers, the movie is bright and colorful. Batman v Superman, by contrast, looks like it was shot entirely at midnight. The visuals of The Avengers are again more appealing to kids and families, and The Justice League should make sure to not go overboard on the blue digital color correction.

The team has to work. They need to both get along and function as a unit, but they're also needs to be conflict between them. Given that two of the members have already had a knock down, drag out fight, the latter part shouldn't be an issue.

Batman is a loner (well, when he's not with Robin anyway), and is usually a reluctant team member in the comics. The movie should keep him that way, and have him resist joining the Justice League until there is simply no other option to save the day without doing so.

It would be easy to make the movie a Batman & friends movie, but the other heroes deserve their turn in the spotlight. Show why this team needs Wonder Woman and The Flash and Aquaman. The Avengers did a good job of justifying the presence on the team of physically weaker members like Hawkeye and Black Widow, and The Justice League should do the same.

I know I've been calling for the film to take notes from The Avengers, but it still needs to find its own voice. The Justice League have been around for a long time, longer than the Avengers, and they're a different sort of superhero team. The film should embrace that, and show the fans why the world needs two movie franchises about superhero all-star teams.

If The Justice League movie incorporates these elements, then I think the film will be a success and will form a strong foundation for the Warner Bros./DC universe moving forward.