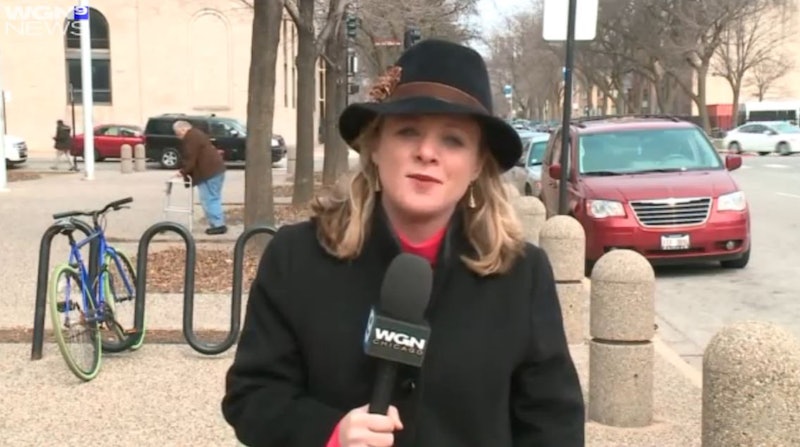 It's no secret that the Internet is full of people saying mean things. But as is evident from a recent segment on a Chicago new channel where reporters read mean messages they'd received, women often bear the brunt of that Internet hate. In fact, there's apparently only one person that seems to outrage people more than women who don't look and act exactly they way they want them to — the weatherman. Sorry, dude. I'm sure you also deserve better.

Videos of people reading the mean things written about them on the Internet has become a common sight, especially on Jimmy Kimmel where everyone from celebrities to the president himself have read mean tweets about themselves. And others have used such videos as well highlight everything from teen bullying to anti-feminist backlash. The videos are often funny, sometimes serious, but always an important reminder that every person on the Internet is just that — a person. And although this should be even more obvious, every person you see on television is a person, too.

Nevertheless, not only do people send mean things to the news anchors they see on television with a shocking degree of regularity, but even worse, guess who tend to get the most intense negative comments? Yup: Women. In Chicago, news station WGN decided to do a segment on the mean messages they receive after one of their reporters, Marcella Raymond, shared a message on Facebook that she'd received from an anonymous viewer about her weight.

And Raymond wasn't the only reporter at WGN who apparently gets a lot of criticism about her looks. In fact, when the reporters shared the worst comments they get, it was quickly apparent that people are much more focused on shaming women for their appearance — and much more likely to seem outraged that women are speaking at all.

And sadly, that isn't surprising on either count. In our society, not only are there unrealistic and often harmful standards for how women's bodies should look, but women's worth as people is often seen as based on our appearance. We also live in a world where women are constantly told in a variety of ways that our voices are wrong and unimportant, and where women are not coded as people with anything of worth to say.

So perhaps it's unsurprising that most of the reporters who participated in the WGN segment are women. Or that the worst comments a male reporter was able to come up with was that he looked "smug" or that he had given a movie review the reader disagreed with, while the women were variously called a "stupid, blonde sorority chick," told they needed a "more sincere smile," lectured to "think before you speak," and informed they should "shove some food down that pie hole of yours — it shuts up that annoying donkey braying noise you make when you talk."

But before you think that the world is awful, apparently people still don't hate women as much as they hate the weatherman. So hey, maybe things are improving.

Head here to watch the video.

More like this
Sandra Bullock, Girlboss Extraordinaire
By Matt Harkins & Viviana Olen
Ask Gen Z: Kate Glavan & The "Ugly Hag Stroll"
By Alexis Morillo
Here’s What Sarah Jessica Parker’s Canned Cosmo *Actually* Tastes Like
By Emma Garza
What Is “Night Luxe?” Breaking Down TikTok’s New Aesthetic
By Courtney Young
Get Even More From Bustle — Sign Up For The Newsletter