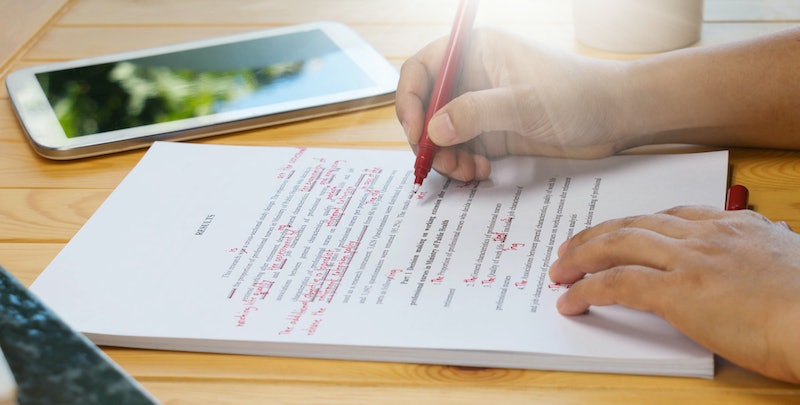 We all know that there are some people who really just can't deal with mistakes in a piece of writing — and sometimes, that person is also you. But what does your reaction to typos say about you as a person? Fortunately, science is here to shed a little more light on that subject. Fair warning, though: If you're someone who carries around a red pen for correcting spelling and usage mistakes, you might not like the answer.

In a new study cleverly titled "If You're House Is Still Available, Send Me an Email: Personality Influences Reactions to Written Errors in Email Messages," researchers decided to investigate how different people react to mistakes in writing, and what people with similar reactions might have in common. Participants were shown several email responses to an ad for a housemate; some of the emails contained typos (such as mistyping "the" as "teh"), others contained outright grammar mistakes (such as confusing "to" and "too"), and some were free from errors.

Unsurprisingly, the emails with mistakes were not as well received as the emails without them; however, the degree to which an individual responded negatively to grammar errors and typos was independent of many factors you might expect, such as age, education, or the frequency with which they used electronic communication. But personality traits, on the other hand, seemed to predict the results quite well.

So what does your reaction to typos say about your personality? Here are a few of the findings.

Turns out those stereotypes of the grammar obsessed as unpleasant and uptight might have some truth to them. (Sorry, fellow word nerds.) Participants in the study who scored higher in agreeableness on a personality test tended to be the least concerned with grammar mistakes. Researchers hypothesize that this is due to the fact that less agreeable people tend to be "less tolerant of deviations from convention." Agreeable people do still get irked by typos, though.

Extroverts don't get very uptight about either typos or grammar mistakes, making them probably the most generally easygoing when it comes to making mistakes in your writing. This makes sense to me: Extroverts probably care more about communicating than whether you're following all the rules while doing so; but introverts, on the other hand, care more about both typos and grammatical errors.

3. Being Conscientious Doesn't Have Anything To Do With It

Researchers thought that being conscientious, a personality trait usually associated with self-discipline and being meticulous, would make people more biased against errors and typos, but it turns out not to have any effect — at least, as far as researchers can tell. In other words, attention to detail doesn't automatically make you bothered by mistakes. Interesting, no?

It's worth pointing out that none of this means that extroverts or agreeable people don't care about grammar, or that introverts aren't capable of looking past grammar mistakes. It just means that extroverts and the agreeable are more likely not to let typos and grammar errors color their judgement of a person. And since language really ought to be more about clear communication than rigid adherence to the rules, that's probably a good thing.