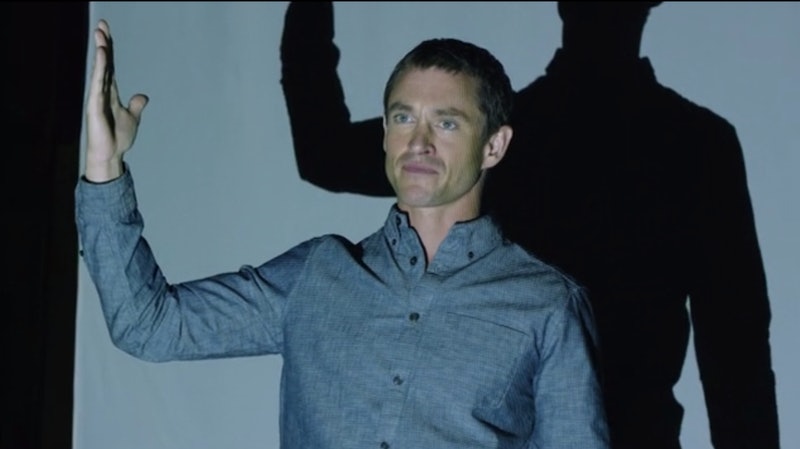 The entire premiere has a tense undercurrent running through it, sneaking little doses of, "Wait, what the heck was that?" in the middle of otherwise normal scenes. Conversations are looked over by etchings of the Meyerist symbol, an all-seeing eye, which also adorns T-shirts and promotional materials. Bedtimes stories are told from illustrated books, but instead of Goodnight, Moon it's The Ladder, which tells the story of the cult's leader who seeks to climb the rungs of The Ladder to hopefully reach The Garden, and he translates these lessons while surrounded by light, supposedly. All of these things are discussed the way most people discuss menu options during brunch — an afterthought, if anything.

The series seeks the jolt viewers off their axis, taking a non-linear storytelling approach in the pilot episodes. Scenes occur, then are flashbacked to from a different perspective, and one major flashback occurs in small moments over the course of the entire episode, ending in a big reveal of what Eddie — Aaron Paul — learned while becoming 6R and how that has forced him to confront the idea that there may not be "a light" after all.

The most discomforting segment of the pilot episode comes when second-in-command Cal — played by Hannibal star Hugh Dancy — tells the allegory of Plato's Cave to his followers, asking his followers whether they want to be blinded by a false reality or shown the truth. The crowd stands and cheers while Cal promises them the truth, and only Eddie suspects they may be receiving a false reality. The series often shows other cult members who say "yes" to almost anything Cal asks of them — but just how much will Cal ask of those who follow him?

Unlike most real-life cults, The Meyerist Movement seems to be surprisingly accepting of women, although The Path has trouble allowing the female leads as much detail as the men. While Cal and Eddie have two opposing viewpoints regarding the movement, Eddie's wife Sarah — True Detective's Michelle Monaghan — is caught between them not just idealistically but romantically as well. She had a relationship with Cal before marrying Eddie, which is a near eye-roll-worthy coincidence. Mary — played by Emma Greenwell — is a victim of severe childhood abuse who offers herself sexually to the messianic Cal, who reluctantly turns her down. Hopefully, showrunner Jessica Goldberg allows these characters to grow on their own and exist outside to context of the men they have — or had — feelings for.

The Path is Hulu's second outing in big-name prestige television this year, and it fits well alongside 11.22.63, another show that deals with matters of mystery and truth. While 11.22.63 revealed the oddities of its world early, The Path seems to be playing its secrets close to the chest — revealing them slowly over time. If you watch The Path, do your best to save your blinking for the commercials — you could miss something important.

More like this
Michael & Kathleen Peterson’s House From ‘The Staircase’ Has New Owners
By Kadin Burnett and Kayla Blanton
Daisy Edgar Jones & Paul Mescal Shared A Sweet Reunion At The Met Gala
By El Hunt
What’s New On Netflix: A Victoria Justice Rom-Com & The Return Of David Letterman
By Arya Roshanian
'Bridgerton' Season 4 Will Likely Focus On This Brother's Divided Heart
By Grace Wehniainen and Alyssa Lapid
Get Even More From Bustle — Sign Up For The Newsletter