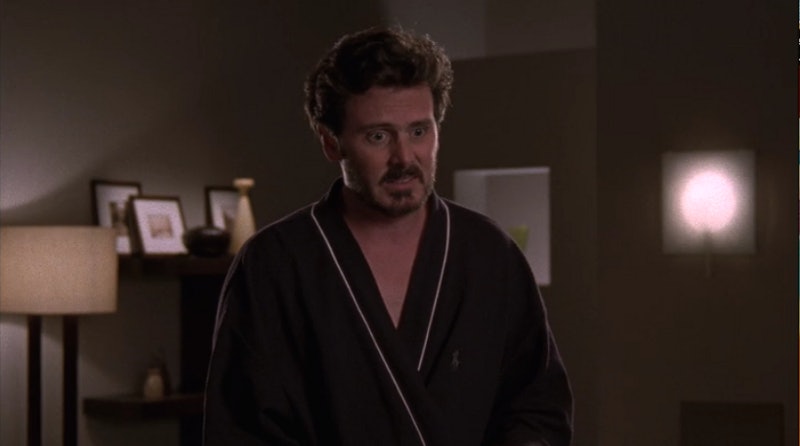 Looks like there's even more Gilmore Girls revival casting news coming from Stars Hollow, and my goodness is it good. Just when you thought the gang was already all back (sans Sookie, of course, #sadface), news broke that the cast of the revival is getting even bigger. On Wednesday, Chris Eigeman announced via Twitter that he would be “paying a visit” to Stars Hollow. But, as much as this casting news seems like kind of a strange nightmare for the girls to me — all of Rory and Lorelai’s exes will be coming back into their lives in the same year?! GAH — I’m pretty sure I have a theory as to why Jason will be back. You ready for this? My guess is that Jason Stiles is the one getting married in the Gilmore Girls revival.

I know that we Gilmore Girls fans are pretty divided on this wedding news. When a picture surfaced from the prop room at Warner Brothers with a super fancy centerpiece-looking thing labeled for a scene called “Wedding,” a million theories began swirling in our generally super united community. A rift appeared, if you will. And that rift was over who exactly would be getting married in the revival. The romantics amongst us held out hope that it would Luke and Lorelai, while the purists made a strong argument for Rory and Jess. But as the rest of the wedding theories trickled in, I couldn’t help fight the nagging suspicion that they were all kinda wrong.

I mean, just look at that prop. That thing is so opulent. It doesn’t make sense to me that any of the Gilmore gals would choose to have something that fancy at their wedding. The only options where that style of decoration would make the slightest bit of sense would be if the wedding were Logan’s or if the wedding were a dream sequence. Otherwise, there’s no way something that extravagant would make its way into either Lorelai or Rory’s wedding. If you ask me, whoever that centerpiece belongs to has to have a ton of a money and very rich taste.

Not only does Jason Stiles come from money, but also, as an insurance broker, he also makes a lot of it. Of all the people returning to the Gilmore Girls revival, he is one of the few that I could see actually having something that over-the-top at his wedding. And if he does happen to be the one who’s walking down the aisle, that seems like a very good reason to bring him back to Stars Hollow. Maybe he’s having one last crisis of faith and tries to get Lorelai back? Or maybe he appears in one of Lorelai’s dreams, standing at the end of the aisle and waiting for her?

However he appears in the revival, I’m betting that it has something to do with this wedding. Now, here’s hoping Lorelai is invited so she can catch the bouquet and marry Luke already.