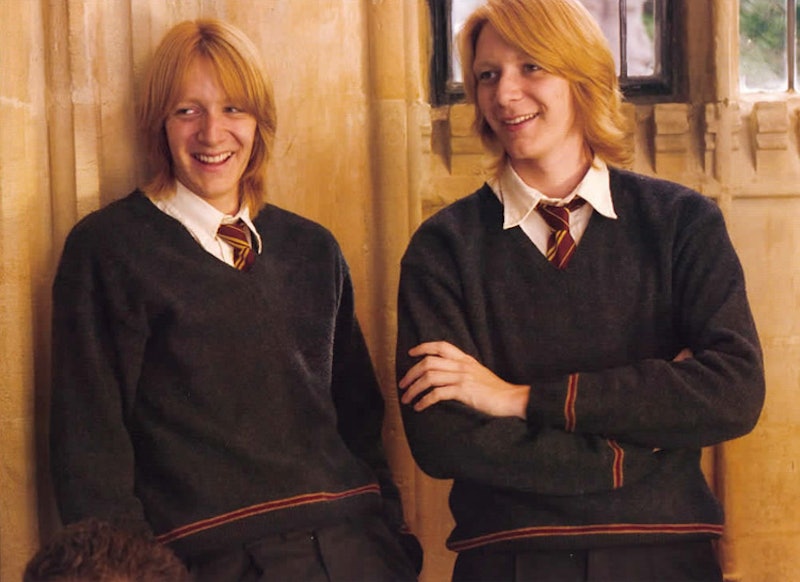 Fred and George. Two beloved literary characters who are both totally alive and not dead. The twins were, of course, born on April 1st, and they grew up to be the finest pranksters Hogwarts ever had. So what better way to celebrate April Fools Day than to remember Fred and George's best pranks?

Every Weasley kid had their thing: Bill was the hot one, Charlie was the one who liked dragons, Percy was the uptight nerd, Ron was the great friend, and Ginny was the other hot one (and a scary athlete with a formidable bat-bogey hex). But the Weasley twins were in a league of their own. They were the comedians of the Harry Potter universe. The two of them, along with their best friend Lee Jordan (Lee Jordan needs some more love, guys) were always ready with a joke or a snide remark or a magical explosion of some kind. They weren't just huge goofballs, either: they were sharp businessmen, even if they didn't care much for standardized testing. Their joke shop was a wild success. They were always ready to help Harry out with the Marauder's Map or some other mischievous tip. And they were always eager to fight the forces of evil, if the occasion arose.

So here is some pranking inspiration for your April Fools Day:

I'm sure that even non-magical sets of identical twins are occasionally tempted to pull this one. But this still makes the list for being such a simple, elegant, annoying prank. The very first time we see the twins, they're switching names just to confuse their stressed out mother. Poor Molly Weasley. Although later on in the books they do confirm that they know their own names quite well: "We're not stupid—we know we're called Gred and Forge."

There could be a whole separate list for Fred and George's inventions. The extendable ears. The canary creams. The headless hats. But really, the puking pastilles (and related skiving snacks) deserve their own mention. The twins invented sweets to make kids ill enough to miss class, and then instantly make them better again (that was how they worked in theory, anyway). They probably shouldn't have tested their treats on quite so many first-years, but we can forgive them for sticking Dudley with a ton-tongue toffee.

Poor Percy. He just wanted to be an insufferable know-it-all, but his brothers were always giving him a hard time. Still, Percy was kind of the worst, and we can forgive Fred and George for bewitching his prefect badge so that it read "Pinhead." Or telling him that "HB" didn't stand for "Head Boy," but for "Humongous Bighead." Or bowing and making a fuss over him just to be jerks. Or sending him dragon dung at work. Classic.

5. Trying to enter The Triwizard Tournament

This one didn't exactly work out as a prank... In the fourth book, the twins take a few drops of aging potion and try to hoodwink the goblet of fire. It doesn't work, of course, and they end up flung backwards with a pair of long white beards. But Fred and George prove that they can be good sports even when they're the butt of the joke, and they concede defeat (how awesome would the book have been if one of the twins ended up as house champion, though?).

Weasleys' Wizard Wheezes was a runaway success, and the twins stocked the shelves with all of their best pranks. They deserve an extra nod for naming their constipation-causing product after You-Know-Who himself, though. The prank feels a little meaner than their usual tricks (I can't think of anyone I hate enough to slip constipation pills into their pumpkin juice), but the name is so wonderfully flippant that we can let it slide.

Do I love the Weasley twins? Yes. Would I want to grow up with them as my big brothers? Hell no. It seems like Fred and George (but mostly Fred) tortured Ron when they were little kids. Fred turned his teddy bear into a spider, giving him a lifelong fear of arachnids. They fed him tongue-burning acid pops. They tried to make him take an Unbreakable Vow. They were, in short, little demons. But (hopefully) Ron can laugh about it now.

The Umbridge era was the true highpoint of Fred and George's Hogwarts pranking. They finally had a teacher so unbelievably terrible that she deserved everything they could throw at her. One of their best moves was the portable swamp, which they left outside her office, leaving no instructions for removable. Flitwick got rid of it eventually, but left one small patch as a touching tribute to the Weasley Twin's legacy.

Peeves is a poltergeist. He doesn't take orders from anyone. Ok, maybe the Bloody Baron, but certainly not from students. And yet, when Fred and George peace out of Hogwarts early, Peeves takes their parting words to heart. They tell him to give Umbridge hell, and that's exactly what Peeves does. He goes on a rampage of mayhem, juggling fire and dumping out bags of tarantulas and hitting Umbridge with a stick as she flees the school. Truly a magical time.

The freaking fireworks scene. Fred and George really know how to make a grand exit. Instead of quietly dropping out of school to start their business, they set off their whole supply of Weasleys' Wildfire Whizz-Bangs, enchanted fireworks that never go out. They only explode or multiply when teachers try to get rid of them. Pretty much everyone except for Umbridge was into it. It was their greatest prank ever, and the perfect way for the twins to fly off into the proverbial sunset.