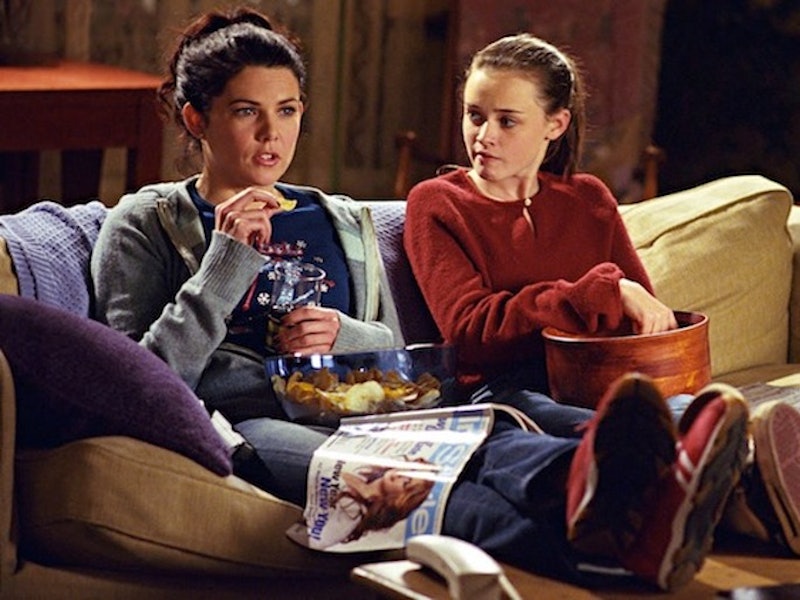 Unless you have been living a technology-free life for the past few months, then you know Netflix is bringing Gilmore Girls back for four 90-minute episodes, and it was recently revealed the series will indeed end with those final four words. Now, you may be asking yourself: Why is everyone so psyched about these final words? Sure, Sherman-Palladino gave an interview a decade ago revealing she knew how the Gilmore Girls would end, and she hasn't deviated far enough from her original plan for the words to change, but is that really such a big deal? Um, yeah, guys, it is that big of a deal.

If you are a longtime fan and you lived through the trauma of finding out the Palladinos would not be writing Season 7, then you remember the panic that set in. Gilmore Girls wasn't just any show. It was a show with a distinct voice tied directly to Sherman-Palladino. It was hard to fathom the show existing without her putting words into Lorelai and Rory's mouths.

Having the show end without Sherman-Palladino's guidance left fans wanting more. There was an immediate need to hear how Sherman-Palladino intended to end the series, but, no matter how many times she was asked (and she was asked a lot), Sherman-Palladino would not reveal the last four words or even how she would have ended Rory and Lorelai's story. The not knowing was beyond hard, and no one could really understand why she wouldn't just give up the goods.

It was in 2009 that Sherman-Palladino began discussing a possible Gilmore Girls return in the form of a movie. In an interview with Ausiello, who was then working at Entertainment Weekly, Sherman-Palladino said, "I don’t want to totally say [what my ideas were], because if there is a movie in the making, I’m going to be basically delving back into where I left off, and then I’m kind of [screwed]."

Suddenly, hope was alive again. You have to remember, in 2009, there was no Girl Meets World, no Fuller House, and no X-Files miniseries. For the most part, if a show was over, it was over — unless it was Sex and the City and could make money on the big screen. When Sherman-Palladino refused to reveal the last four words in 2009 it became evident the show wasn't over for her. She wanted to go back to Stars Hollow again, and she was going to make it happen somehow.

Of course, it didn't happen then. Sherman-Palladino continued doing interviews, and journalists continued trying to get her to reveal those last four words. She wouldn't budge. Gilmore Girls fans would often discuss what those final four words could be. It was a mystery of epic proportions for anyone who loved Stars Hollow, but it didn't seem like one that would ever be solved.

In 2012, Sherman-Palladino's Bunheads debuted and instantly charmed fans and critics alike. What the show lacked in ratings, it made up for in devotion from its passionate fanbase. Sherman-Palladino finally had a new project, one she could bring as many Gilmore Girls alums on board for as she wanted, and a Gilmore Girls revival seemed like more of a dream than ever before. Still, when she was asked what the final four words were, she declined to say.

Sadly, Bunheads was cancelled shortly afterwards (and no, no one is over it), and it seemed unlikely that a Gilmore Girls return was on the horizon. Fans were living sad TV-watching existences where there was no Sherman-Palladino goodness in sight. Then in 2014, Netflix acquired the streaming rights to all seven seasons of Gilmore Girls, and the Internet lost its collective mind. All anyone wanted to talk about was a show that went off the air seven years before.

Then something truly magical happened: The Gilmore Girls cast reunited at the 2015 ATX Festival, and Sherman-Palladino still refused to reveal the final four words, because there were actual talks of a revival happening. Fast-forward a few months and those talks became a reality; it was confirmed those elusive final four words that had both given fans hope and driven them crazy would finally be revealed, and, according to Lauren Graham, Lorelai Gilmore herself, they would be said by Lorelai and Rory.

It's been a long, crazy road for Sherman-Palladino and the fans, and those four words, whatever they may be, have lingered not just as a question, but as a promise that maybe, someday, Rory and Lorelai would actually get to say them. In a few short months when the Netflix revival lands on the streaming site, Gilmore Girls will finally end the way Sherman-Palladino always intended it to, and those final four words will be the last thing fans hear from the Gilmores.

Now you know why those four words mean so much. They were a promise that one day, Sherman-Palladino would take you back to Stars Hollow again, and, while it took her a decade, she kept her promise.