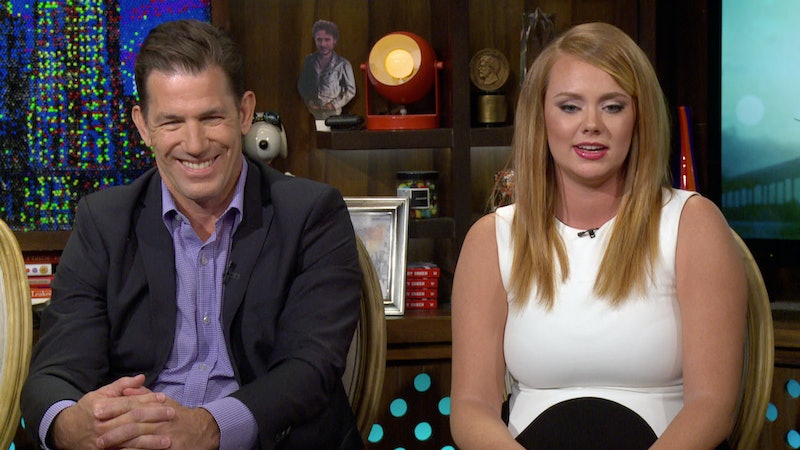 Kathryn, 24, and Thomas, 53, started out their relationship on the show with a bang — in, like, the second episode of Season 1, Kathryn announced she was pregnant with either Shep or Thomas’ child. Spoiler alert, that was just a scare, but history did repeat itself, for real that time — Kathryn and Thomas welcomed baby Kensington in 2014. Viewers saw in Season 2 that it was not all sunshine and rainbows between Kathryn and Thomas, even with a new baby. Kathryn was stuck out on Thomas’ plantation, away from Charleston, and she felt increasingly lonely and isolated from her friends and family. I mean, she was a new mom and she pretty much had no one to talk to. I would probably go a little crazy, too. At the same time, Thomas was trying out an ill-fated run for Senate, and he and Whitney were spending all of their time strategizing. Thomas even forgot to thank Kathryn during one of his campaign speeches. I mean, come on.

By the end of Season 2, Kathryn and Thomas were kaput. But, that didn’t last for long, though, because, as People reported, Kathryn welcomed her and Thomas’ second child, St. Julien Rembert Ravenel, on Nov. 9, 2015. Sure, Kathryn and Thomas keep making beautiful children, but are they a couple right now?

Nope! Kathryn told Bustle in an interview that she and Thomas are splitsville for good. "Currently, no, we are not together," she says. "And, we will not be getting back together. I'm just focusing on my children. That's what's the most important thing, regardless of my relationship with Thomas. I just want us to both be great parents."

It is nice to see that both parents are actively involved in raising their kids.

Kathryn posted a picture of her baby boy in what is the cutest bowtie-and-plaid-pants combo I’ve ever seen. Look how tiny he is. I just wanna squeeze him.

Kensington Is Hitting The Slide

Look how big this little nugget is! Thomas and Kensington hit the park recently, and it seems like Kensie can’t get enough of that slide.

St. Julien Is Snugging With Daddy

Kathryn and Thomas really do make beautiful babies, don’t they? Look at that adorable little man.

My, my how time flies. I remember when we were just talking about Kensie being born, and now she’s celebrating her second birthday with her mama. Where do all the Southern Charm seasons go?

I can’t tell if Kathryn and Thomas are together, but honestly, I don’t think that they know either. I guess we’ll just have to watch Season 3 of Southern Charm to find out.