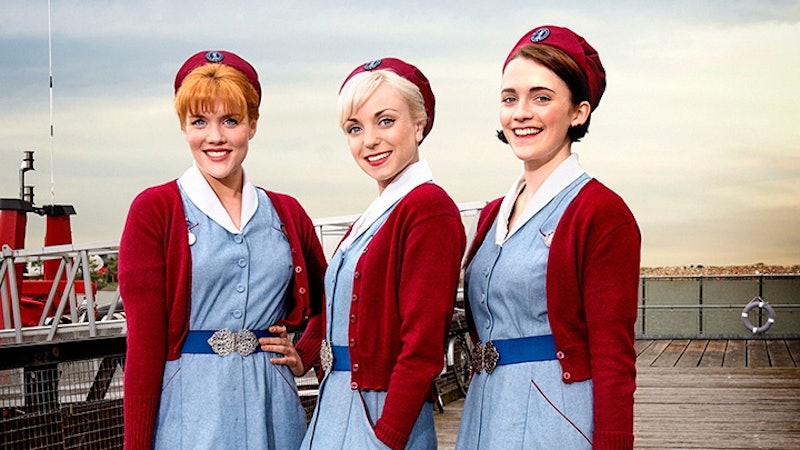 It is time to return to London's East End on Sunday, April 3, when Call the Midwife Season 5 premieres on PBS. This season is going to be full of changes for the nuns and midwives of Nonnatus House as Call the Midwife goes boldly forward into the 1960s. Jenny Agutter, who plays the gentle Sister Julienne, could not be more excited for American viewers to see these beloved characters shed the hardships of the '50s in favor of the more daring '60s.

"Suddenly there is a new energy and everything that had been held back during the war — the science, the arts, the music — everything surges on," Agutter tells Bustle. "So you arrive in 1961 and it is a brave new world. There is more available, the NHS [National Health Service] is established, and everyone is beginning to expect so much. There's more liberties, more freedoms, and with it comes greater responsibility and more choices."

The sudden influx in music and liberties doesn't mean the East End will no longer have to deal with poverty. If anything, the increase in health choices will bring more confusion into the lives of both the patients and the midwives. "Everything was so held back by the Second World War," Agutter says. "Medicine and research was all held back, and these changes happen very fast."

One major medical revelation that seems like a miracle will quickly turn out to be anything but in the season premiere. Agutter revealed the use of thalidomide to treat morning sickness will result in tragedy for the parents of a child born with shortened limbs. At the time, no one knew the drug was linked to birth defects, and Season 5 will find the doctors and midwives alike baffled by the sudden uptick in birth defects.

"The very first episode echoes the last you saw in four which is, of course, there is a child born with shortened limbs," Agutter says. "We don't know what that is until the very end because the whole of the series has that as an overriding arc — which is thalidomide. So that is very much one of the big things it takes that on."

It's not just the world of medicine that is changing around the characters, the culture of the East End and the world is changing as well, and as always there will be some who are resistant to change. A single teacher who finds herself pregnant will cause a stir in the community, and even the gentle-spirited Sister Julienne will find herself struggling to accept the new social climate she has been thrust into.

Per Agutter, "Julienne is also coming up against different kinds of values, different people, people who are more into thinking about what they will expect than what they will do. She is a very caring person, she never really questions the way people are, but it just seems that much harder. It's interesting even in '61, you think people are becoming more liberal in their thinking and not as judgmental, but they're not."

Of course, some things in the world of Call the Midwife will never change, especially its ability to make viewers cry. Agutter hinted at a tragedy coming Sister Mary Cynthia's way that leads to a powerful storyline between the young nun and Sister Julienne. Along with the sad tears, will come the happy tears as well as more babies come into the world and the nuns and midwives continue to draw strength from each other.

If you are worried about Call the Midwife running out of material as it heads into a new decade, then allow Agutter to soothe your fears. "I have to say this series, when you come to Series 5, you think how many more stories can there be? And they are limitless," the actor says.

That is the best news Call the Midwife fans could possibly hear.

More like this
Netflix Shut Down 'Bridgerton' S3 Rumours About A “Very Dark” Storyline
By Bustle
'Wednesday' Star Emma Myers Thinks A Wenclair Storyline Is “Possible” In Season 2
By Alyssa Lapid
Shonda Rhimes Responded To The Surprise Exit Of A Day 1 'Grey's Anatomy' Figure
By Grace Wehniainen
'Succession' Season 4 Will Be An "Absolute Banger" According To Cousin Greg
By Bustle Staff
Get Even More From Bustle — Sign Up For The Newsletter
From hair trends to relationship advice, our daily newsletter has everything you need to sound like a person who’s on TikTok, even if you aren’t.