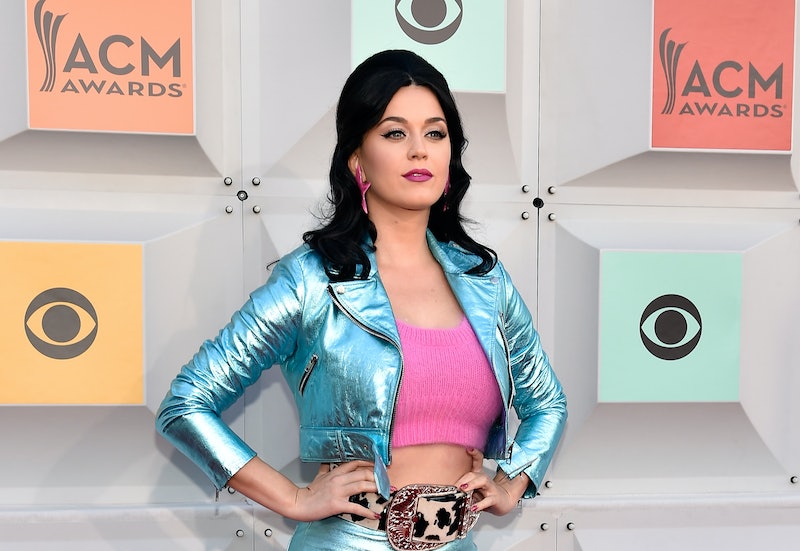 She might not be the first celebrity you name when you think of "country music," but Katy Perry at the 2016 Academy Of Country Music Awards is totally channeling cowgirl, country kitsch glamour and looking right at home among country music's biggest stars.

This is her first red carpet appearance at an awards show since Perry skipped the 2016 Grammys, very publicly telling The New York Times that she'd prefer to spend music's biggest night at home, "in my pajamas, eating matzo ball soup. No makeup, glad I’m not in a corset. Vicks cream on."

So it's nice to see Perry back at it again, rocking full glam tonight on the red carpet of the ACM Awards at the MGM Grand Garden Arena in Las Vegas, and embracing the night's theme with everything she's got. Perry really took the country glamour to heart, appearing on the red carpet with frequent collaborator Jeremy Scott: The Moschino designer who's known for creating over-the-top looks. (Scott was responsible for Perry's Super Bowl looks, after all.)

Perry showed up on the ACM red carpet rocking a hot blue, shiny leather skirt with fringe and black fishnet tights, paired with a matching motorcycle jacket and a hot pink crop top. Her oversized belt was pure Western-style glam, what with its cow print.

She continued the cowgirl motif with her shoes, rocking pink stiletto boots with more cow print.

And for her beauty look, she went relatively simple, all things considered, rocking an appropriately-sized bouffant and hot pink lips. The musician accessorized with bright pink star-shaped earrings, because I guess she needed more color.

Somehow, this whole look works, and it's a pretty spot-on homage to the bling of country music's history. Given this total country rockstar look, it's not hard to imagine what kind of over-the-top ensemble Perry might have in store for her duet with country legend Dolly Parton, who is arguably the queen of glitz and glitter.

Perry was so stoked about the performance that she even posted a sneak peek of her bedazzled boots for the performance on her Instagram. And if these hot pink and yellow satin knee-high cowboy boots are any indication, Perry and Parton are ready to put on a show, and Perry's going to continue this motif throughout the night.

This red carpet look is classically pop culture-friendly Katy Perry, and she can rock high-glam country kitsch like few others can.