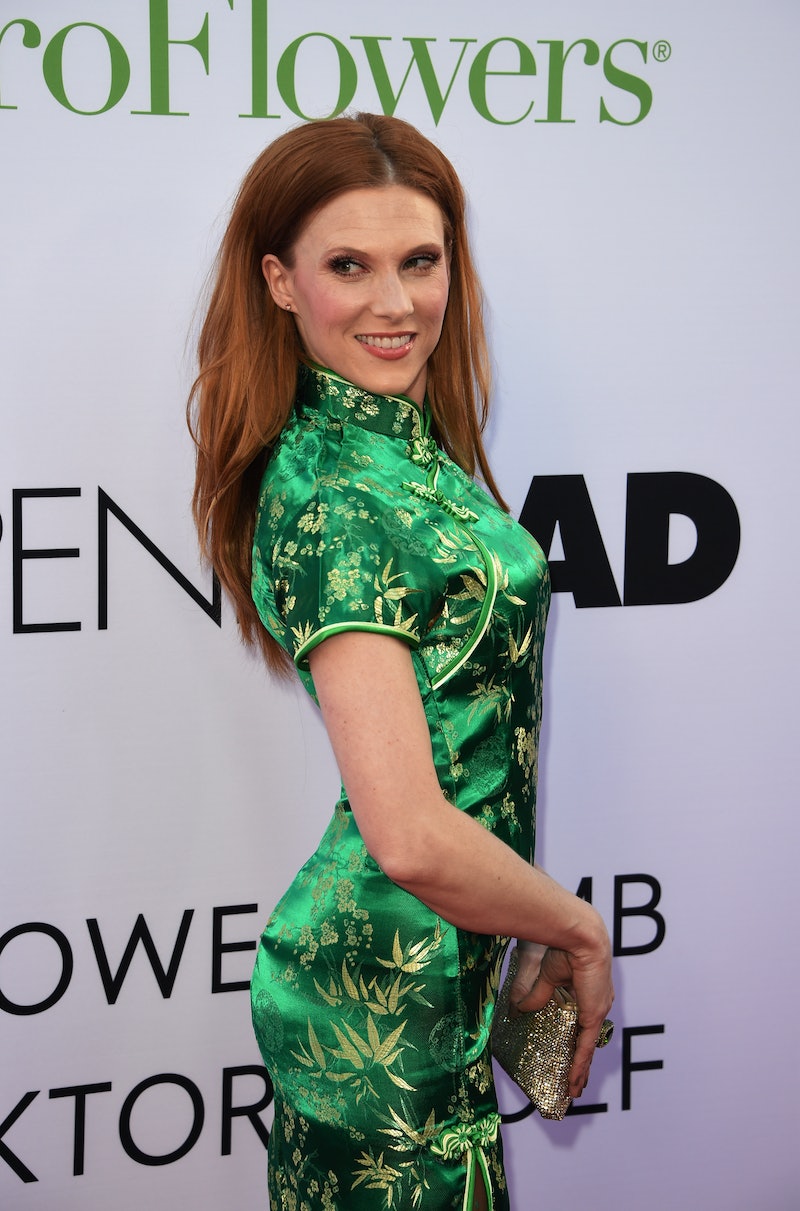 Though Lucy Walsh is a self-admitted cinephile, Garry Marshall's Mothers Day marked the first time that the actor worked on a major Hollywood set. Thankfully, as she tells Bustle, her more experienced co-stars provided some solid support. "From the first day of shooting, I felt very protected by Garry and had fun getting to know the other actors, especially Jason Sudeikis," Walsh says. "I'm a big fan of his work on SNL, and admire how he makes comedy a part of his day-to-day life."

In the ensemble comedy, out April 29, Walsh plays Jody, Sudeikis' character's best friend, an optimistic foil to his more cynical, widowed character. "He's going through a lot of loss, and I'm trying to help him get back into the saddle," she says. "My character in Mothers Day is a very glass-half-full kind of person." Jody and Bradley's back-and-forth dynamic is something right of a Shakespearian comedy, something Walsh, who's performed his plays, says she took to straight away. "Garry [Marshall, the director] has this gift for showing people being people," she says, "and I really appreciate how he captures the humor of everyday life. The script is a gift."

Walsh recalls how she found herself captivated by the Mother's Day screenplay upon her first read-through. "I was so emotional — laughing, crying. I think it's a powerful film since it portrays something we all have in common: a mother," she says. "This movie is for everyone, whether you have a mother you love, a mother you hate, a mother who passed away. It'll bring you in. I think that's a sign of any good story."

Walsh has a pretty darn good story herself. The daughter of of Eagles' guitarist Joe Walsh, Walsh has worked to transcend the cliched "celebrity child" image, taking on projects that speak to her own passions, not her father's. While she says that she's working on building a strong relationship with her musician dad, Walsh adds that she is more interested in developing her craft than developing a place in the tabloids, and her background in theater certainly backs that up. In fact, it was Shakespeare himself who helped her land this breakout role; Marshall saw her performance in a production of A Comedy of Errors and contacted her for an audition.

For Walsh, working with the director was a dream come true. "It was a huge goal of mine to work with Garry," she says. "I grew up watching his movies — Pretty Woman, Beaches — I was so excited to be a part of this cast." And despite the film's starry ensemble — actors like Julia Roberts and Jennifer Aniston all have roles — Walsh insists that working with Marshall was her favorite part. "Beaches was my movie growing up," she says, with a laugh. "It something that I share with girls all over the world."

Now, with Mother's Day, Walsh gets to share her love of acting — as well as her passion for music. Walsh is a classically-trained pianist and singer, and her song "Winter Coat" appears on the Mother's Day soundtrack. Yet she says that music is not her focus. "While my background is musical, my aim is TV and film," she says. "I study my craft everyday. It's not glam. I watch a different movie daily and dissect the directors' work. I have to be hardcore about it in order to make it happen."

Sounds like she's well on her way to doing just that.