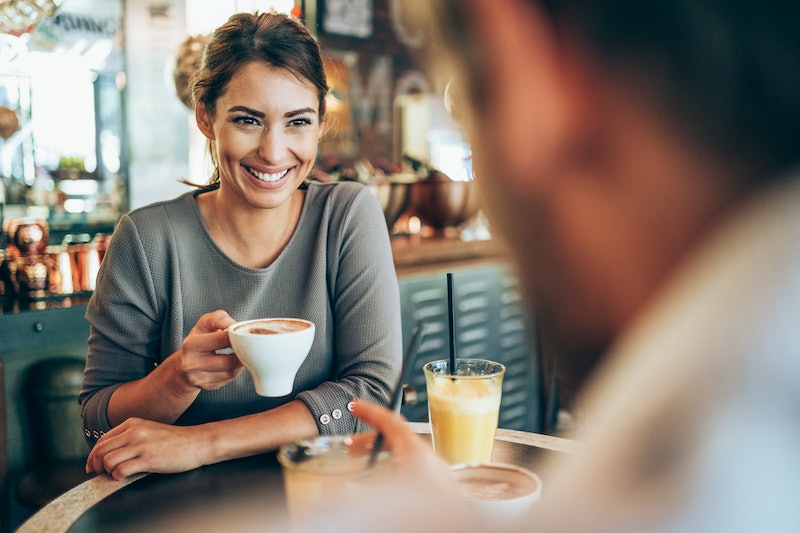 People, especially women, are often wary of dates objectifying them, and rightfully so. But since objectification is such a widespread part of our culture that we internalize, it's also worth asking ourselves if we're objectifying others. Fortunately, there are a few signs you're objectifying your date without realizing it, and recognizing them can help you catch objectifying behavior before it escalates.

The simplest definition of "objectification," according to Merriam-Webster, is "to treat (someone) as an object rather than as a person." To understand this definition more thoroughly, it's helpful to think about the difference between an object and a person. First of all, an object doesn't have feelings, whereas a person does. In addition, an object exists for somebody's use, whereas a person exists in their own right. So, viewing someone as an object can mean disregarding their feelings or reducing them solely to what they can offer you.

Though the media encourages us to view women as objects in particular, there are a few sneaky ways we can all objectify one another. Here a few signs that you could be objectifying your date without realizing it — and why these behaviors aren't helpful to forming healthy relationships.

1. You're Hanging Onto A Fantasy Of Them

It's hard for many of us to distinguish between liking someone and liking the idea of them. But flattening someone into a stereotype or fantasy is a subtle form of objectification. Viewing someone as the embodiment of an abstract idea, like the "manic pixie dream girl" or the "bad boy," may not be viewing them as an object per say, but it's still not viewing them as a person or getting to know them for who they really are. If you find yourself hanging on to your version of who someone is even after they contradict it or assuming things about them that they haven't confirmed, you could be engaging in this form of objectification.

2. You're Focused On What They Can Offer You

Perhaps JFK's famous quote should be adapted to say, "Ask not what your date can do for you but what you can do for your date." I'm only half-serious — you should be asking both — but if you treat your date like they're auditioning to be your significant other, it's worth reminding yourself that you're not the only one running the show. Rather than focusing on what you can get out of people — whether that's entertainment, sex, validation, or financial support — think about what kind of connection you can mutually form instead, even if it's not a romantic one. Letting go of what you hope to get out of someone and meeting them where they are can open the door to friendships, professional connections, and other relationships you may not have even imagined when you first headed out on the date.

3. You're Disproportionately Paying Attention To One Thing About Them

Relatedly, if you're overweighing one aspect of a person, whether that's their looks, their money, or their profession, you may be focused on how you can use them rather than what kind of relationship you can mutually enjoy. This can happen regardless of your gender or your date's. A male friend once told me that while he knows some men who view women like walking sex objects, he's also met some women who view men as walking opportunities for financial stability. (And, since times are changing, you can also see both scenarios in reverse and with LGBTQA+ relationships.) Either way, this isn't a foundation for a healthy relationship because you're not getting to know the whole person. There's nothing wrong with paying attention to someone's looks or financial stability, but these things shouldn't block you from learning other things about them. Even if you're 100 percent not attracted to someone and don't want to date them, they're still a person worth getting to know for its own sake.

4. You've Already Decided How You Want The Date To End

If you're just looking for a hookup, that doesn't necessarily mean you're objectifying the other person, but you could be if you're not actually feeling out whether you want to hook up with them in particular (rather than just hook up with someone in general), or whether they want to hook up with you. Viewing somebody as a potential hookup and nothing else reduces them to what you can get out of them. Every two people have their own dynamic, and you can't know that dynamic until you've actually met someone and gotten to know them as a person. On the flip side, hoping to experience love at first sight and have a fairy-tale-like romance can also objectify someone by forcing them into a mold of what you want that ignores who they actually are or what they want.

5. You're Comparing Them To Others

One subtle way of objectifying people is classifying them into types. You might be doing this when you have thoughts like "he's a man-child like my ex" or "she's a Zooey Deschanel type girl." This reduces somebody to a set of qualities rather than acknowledging their individuality. Sometimes, when you get to know someone, their similarities to others can prove true. But we as humans like to categorize things and people, and this tendency can lead us to squeeze people into narratives that don't actually apply to them. When you view someone as a person, not an object, you interpret their actions on an individual basis that takes their own situation into account.

6. You Feel They Owe You Something

Another difference between a human and an object is that you can do whatever you want with an object, but a person gets to make their own decisions. This means that no matter how nice you are, whether or not you paid for the date, or what else you've done for your date, they don't owe you their time, sex, money, another date, or anything else. Even when your date's decisions bum you out, you have to respect them — because that's what it means to treat someone like a person, not an object.