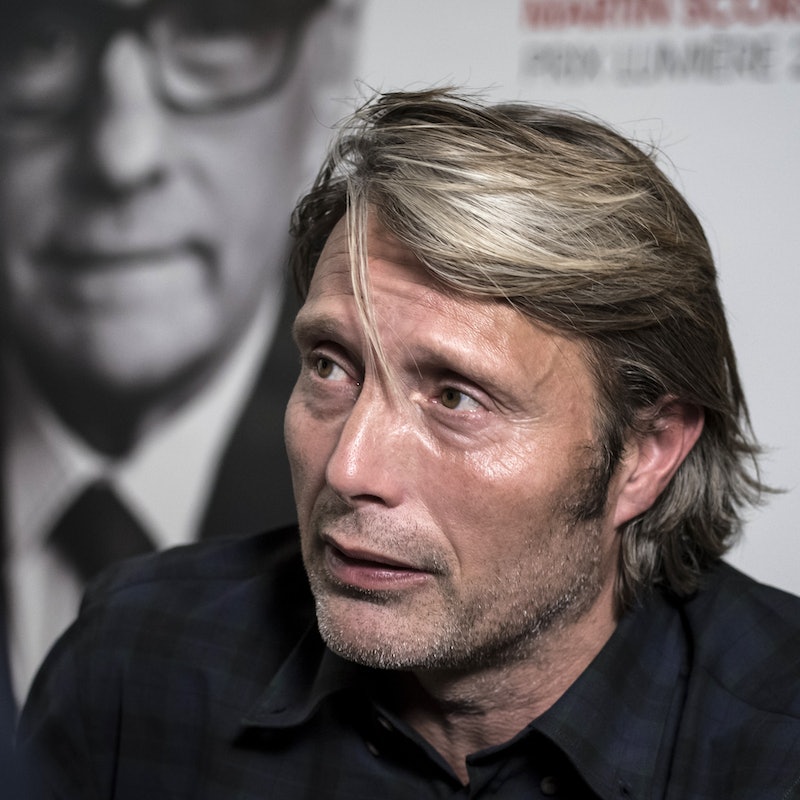 Just a couple of days ago, we got our first look at Benedict Cumberbatch in Doctor Strange , the next chapter in the Marvel Cinematic Universe following May's Captain America: Civil War. The set pictures showed the Oscar nominee decked out in his full superhero ensemble as Stephen Strange, the neurosurgeon trained in magic by the mystical sorcerer the Ancient One (played by Tilda Swinton). The cast of the upcoming comic book adaptation also includes Rachel McAdams, Chiwetel Ejiofor, Michael Stuhlbarg… and Hannibal Lecter himself. Now we have our first look at Doctor Strange villain Mads Mikkelsen — and he's looking fierce as hell.

I mean that literally. In his villainous role, Mikkelsen is sporting some eyeshadow so fabulous it would make RuPaul envious. Unfortunately, these pictures from the set get us no closer to divining the actual identity of Mikkelsen's character, who has simply been described by Marvel Studios president Kevin Feige as "a sorcerer who breaks off into his own sect," as he told Entertainment Weekly last December when news of the Hannibal actor's casting broke. "[He] believes that the Ancient One is just protecting her own power base and that the world may be better off if we were to allow some of these other things through."

Whoever Mikkelsen is playing, it's nice to know we'll be able to see his captivating face as he chews the scenery and kicks Cumberbatch's cumber-butt. Too many great actors have been unrecognizable in their Marvel villain roles (Christopher Eccleston as dark elf Malekith in Thor: The Dark World, Lee Pace as Kree warlord Ronan the Accuser in Guardians Of The Galaxy), so Mikkelsen's fans can breathe a sigh of relief that his role involves striking eye makeup rather than heavy prosthetics or motion-capture.

In fact, Mikkelsen's look as his unnamed antagonist is so promising that it makes me hope he'll stick around for future films. As successful as the MCU has been, it's widely acknowledged even by its most ardent fans that the franchise has something of a villain problem: other than Loki, there has been a severe lack of memorable baddies. That mischievous Asgardian is the only villain to have appeared in multiple films, surviving Thor to also wreak havoc in The Avengers, Thor: The Dark World, and presumably the upcoming Thor: Ragnarok. (No, Thanos' cameos in multiple post-credits scenes doesn't count.)

We've seen the Avengers tear through a series of one-and-done bad guys like Iron Monger, the Abomination, Whiplash, Red Skull, the Mandarin, Malekith, Ronan, and Ultron. When you know that the villain is going to be definitively vanquished and probably killed by the end of the movie, it significantly lowers the stakes and makes it hard to believe anyone poses much of a threat. I'm not saying Mikkelsen's character should defeat Doctor Strange (although wouldn't that be surprising?); but perhaps Feige should consider at least letting him survive the events of the film… so he can come back and fight another day.

Anyone who watched the three gloriously gory seasons of NBC's Hannibal (or even just one episode of it) know that Mikkelsen is capable of playing memorable and compelling villain. Hopefully Doctor Strange will give the actor enough room to craft an antagonist truly worthy of his opponent — and then make the smart move of keeping him around for more. Because if anyone can pose a threat to the Avengers, it's definitely charming cannibalistic sociopath Hannibal Lecter.